Ceramic matrix composites (CMCs) made with SiC fibers are twice as strong and 20% more heat resistant than the alloys despite being two-thirds lighter.

Meanwhile, the compact new Airbus A320neo, which went into service last year, owes its high fuel efficiency to engines supplied by two companies. One of them, CFM International, a joint venture between GE Aviation and Snecma of France, is the first company to include SiC fiber-based CMCs in its engines. Although the ceramic is found in only a few parts, the move may herald a growing trend in aircraft engine manufacturing. 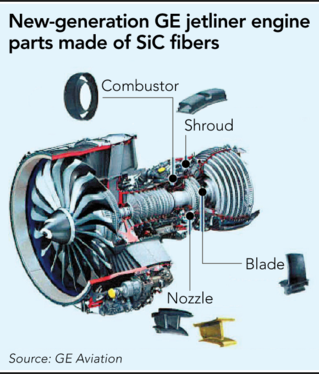 SiC fiber is made by melting a compound of carbon and silicon -- called polycarbosilane -- and forcing it through a nozzle, which shapes it into a fiber with a diameter of about 10 micrometers. After that, the fibers are subjected to a special electron beam in an anoxic treatment to prevent degradation when exposed to extremely high temperatures. Finally, the fibers are woven into clothlike shapes that can be used in CMCs -- light, highly heat-resistant ceramics able to withstand the high temperatures inside jetliner engines.

Currently, Japan's Ube Industries and Nippon Carbon are the only companies in the world that can manufacture SiC fibers. U.S. chemical giants Dow Chemical and Corning have tried but failed to produce the material commercially.

In the late 1980's, there were few applications for SiC fibers and Nippon Carbon's SiC fiber business was in the red. At the time, however, GE, the world's largest aircraft engine manufacturer, considered replacing nickel alloys with SiC fiber-based ceramics in certain engine parts. Sensing an opening, Nippon Carbon attempted to raise heat resistance of their SiC fibers from 1,300 C to above 1,500 C -- the range necessary for use in aircraft engines.

The technological challenges were daunting, but the company overcame them by enlarging the molecular mass of the carbon fibers by exposing them to electron beams. Since then, the company has developed SiC fibers able to withstand temperatures up to 1,900 C, convincing GE that the fibers are suitable for aircraft engines.

Unlike nickel alloys, which can only withstand temperatures up to 1,600 C, SiC fibers do not require air cooling. This enables jetliners to use air more efficiently as regards propulsion, resulting in higher fuel efficiency.

The main impediment to wider commercial use of SiC fibers is their price: SiC fibers are 100 times more expensive than carbon fibers, which go for 3,000 yen to 10,000 yen ($27 to $90) per kilogram. Demand for the new fibers will only increase when their cost comes down. Improving manufacturing technology will prove crucial to this goal.