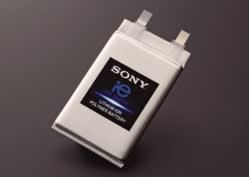 TOKYO -- Sony plans to introduce a new high-capacity battery in 2020 that will enable smartphones and other devices to run 40% longer, aiming to stake out a larger share of the battery market.

High-capacity batteries provide longer run times for smartphones and other devices while taking up the same amount of space. Sony's version could power the latest Apple iPhone, the 6s, for 14 hours while the device is connected to the Internet, calculations show. Batteries could also be made 30% more compact while maintaining current run times, letting manufacturers build smaller devices.

Batteries used in smartphones and other devices are charged and discharged as ions move from a positive to a negative pole and back again through a liquid electrolyte. Most mainstream batteries use positive electrodes made from lithium cobalt oxide and other such compounds. Sony's battery, however, uses a sulfur compound, letting it store a good deal more electricity than other models.

Previous attempts at sulfur-bearing batteries have seen the electrode dissolve into the electrolyte over repeated charge cycles, shrinking capacity. Sony has managed to overcome that problem, in part by reformulating its electrolyte solution. The company will now work to verify the safety of its product and establish a mass-production technology.

A number of other new technologies are also under development. Solid-state batteries, which use solid rather than flammable liquid electrolytes, have drawn attention for their safety. Metal-air batteries, which draws oxygen from ambient air, are notable for their high capacities. Yet sulfur-bearing batteries have drawn particularly high hopes as a potential power source for devices including smartphones and wearables, as advances have been made in increasing the products' capacity and operational life. Other companies are rushing to develop sulfur batteries as well.

Sony has long been a technological leader in the battery industry, becoming the first to release a commercial lithium-ion battery in 1991. But the company commands only around an 8% share of the current compact lithium-ion market, while Samsung SDI, the South Korean conglomerate's battery-making unit, South Korea's LG Chem and Panasonic each control around 20%, Techno Systems Research reports. Sony hopes to close that gap by becoming the first to successfully commercialize a new battery technology.