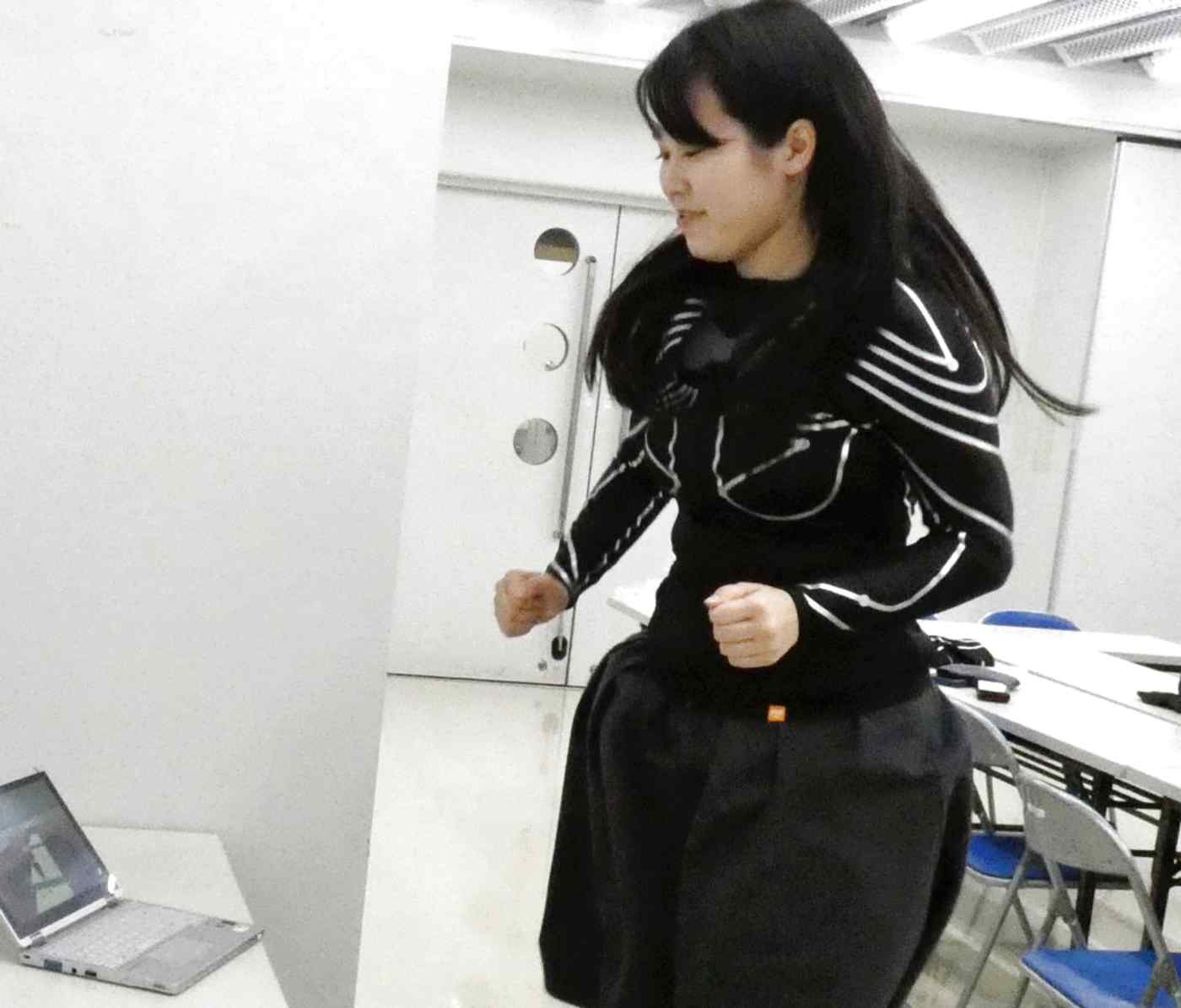 TOKYO -- From gauging golf swings to detecting Parkinson's disease, a biometric shirt resembling a Spider-man outfit could find a place in the future of fashion.

The shirt from Tokyo-based startup Xenoma, a spinoff from the University of Tokyo, features a clothlike sensor-equipped circuit laced through the garment that monitors body movements then sends information to a smartphone.

Comfortable to wear, the shirt is also machine-washable and highly durable.

Xenoma worked with German luxury fashion maker Hugo Boss to develop "smart" golf clothing ahead of this year's CES, an annual consumer electronics fair held in Las Vegas, which wrapped up on Jan. 12. The new sportswear provides wearers with information on their golf swing via smartphone or PC.

The startup is collaborating with other partners and exploring new applications to cash in on the growing market for wearable devices, including in preventive care and as an input controller for gaming.

Both the whole-body and upper-body varieties have Spider-Man-like lines traversing the torso and arms, which do not constrict movement. Made largely of polyester, e-shirt feels like a normal shirt owing to the soft electronic circuit.

Sensors covering the chest, shoulders, elbows, armpits and 10 other parts of the body detect movement from the forces applied.

As the shirt expands and contracts, the sensors transmit signals to a nearby smartphone or PC via a small Bluetooth device on the chest. The device is also equipped with acceleration and gyroscope sensors, which can calculate jumps, a big plus for online gaming and virtual reality applications.

Xenoma is not alone in using "internet of things," or IoT, technology in clothes, but other companies employ electrically conductive fiber for sensors. Senior care providers in Japan get help from latest gadgets

Japan Inc. looks for unicorns but sees a lack of ambition

According to Xenoma CEO Ichiro Amimori, what makes the shirt unique is the clothlike electronic circuit, which was developed by Takao Someya, a professor at the University of Tokyo who had been conducting research on bioharmonized electronics.

The circuit is insulated to protect it from sweat and washing.

As an IoT platform, e-skin technology can also gather user information for big data applications. The startup is offering a development kit for software that utilizes data obtained through e-skin.

Xenoma began offering an e-skin and software development kit to corporate customers for 500,000 yen ($4,514) in February 2017. The company also started selling e-skin to individuals for $479 in September 2017.

The startup is now collaborating with others on commercializing its technology. CEO Amimori is focusing on health care, especially preventive care, among other areas.

In March and April, the company will have Germany's University of Duisburg-Essen conduct experiments with the shirts to monitor electrocardiograms and other health information of dementia patients and to detect changes in walking that may indicate Parkinson's disease.

Xenoma CEO Amimori said, "We want to prevent people dying suddenly due to cardiac infarction and other causes." This may be possible if e-shirts include an emergency alert function.

E-skin could urge wearers to exercise if it detects lethargy, and might also be configured to obtain other health information, such as heart rate and body temperature -- a safety feature that could aid persons operating vehicles like taxis, trucks or heavy machinery.

In the future, Xenoma hopes to introduce a usage-fee pricing structure while keeping the cost of e-skin sold to the public at around 10,000 yen each.

It is also aiming to kick off advertising along with "watch over" and preventive care services, utilizing big data accumulated from the clothes. The services are expected to be introduced in 2019 or later.

Xenoma established a U.S. office in the state of Massachusetts in 2016 to sell e-skin to American companies and universities.

The startup aims to boost monthly e-skin sales to 100 units, targeting annual sales of 3 billion yen, including usage fees, in 2020.

U.S. research company Gartner estimates that the global market for wearable devices will nearly double from about 270 million units in 2016 to some 500 million in 2021.