Strong, lightweight titanium is edging onto steel and aluminum's turf

Metal appearing in everything from medical instruments to marine structures TOKYO -- Titanium is gaining more and more of a presence in manufactured goods. While it cannot be produced in large volumes, it is heat-resistant, lightweight and corrosion-proof. It was first used in the defense industry, and its applications have now spread from aircraft to autoparts, construction materials and medical instruments.

The current, widespread method of refining titanium was discovered 70 years ago. Though it is the fourth most abundant practical metal after aluminum, iron and magnesium, titanium is still classified as a rare metal because of the difficulty of refining it. Titanium alloy made by Nippon Steel & Sumitomo Metal is used in the LEAP engines in Airbus and Boeing planes.

The specific gravity of titanium is 4.5, just half that of copper and nickel, which are both 8.9. It is 40% lighter than iron, which has a specific gravity of 7.9. Titanium alloys are on a par with or stronger than high-strength specialty steels. At temperatures up to around 500 C, it is among the top practical metals in terms of strength for a given density.

Titanium alloys made with nonferrous metals are used in intake fans and turbines in jet engines, as well as in wings, fuselages and other large structural components.

Metal producers mold alloy ingots in stages and supply them to parts producers and engine manufacturers affiliated with Europe's Airbus and U.S. aircraft maker Boeing. American, European and Russian companies such as Russia's VSMPO-Avisma and Wyman-Gordon of the U.S. hold the bulk of the market share of titanium for aircraft.

In recent years, however, Japanese manufacturers have expanded supplies. Titanium alloy made by Nippon Steel & Sumitomo Metal is used in the LEAP engines that power the latest small aircraft from both Airbus and Boeing, the A320neo and the B737 Max, respectively.

Kobe Steel last year began mass-producing forged titanium products for use in the landing gear of Airbus's main large airliner, the A350XWB. Japanese titanium is also being used in the Mitsubishi Regional Jet being developed by Mitsubishi Aircraft.

Coupled with the switchover of fuselage materials, the use of titanium alloys in structural components is increasing.

In a growing trend, parts that have until now been mad of aluminum alloy are being replaced with carbon-fiber-reinforced polymers. However, when aluminum and CFRP are bonded, the aluminum is susceptible to thermal expansion and corrosion. Titanium alloys do not suffer from these shortcomings. "Their affinity with CFRP is pre-eminent, and they are easy to use in reinforcing materials," said a Nippon Steel spokesperson. The fuselage of the A350XWB, which began operations last year, is more than 50% CFRP -- a first for Airbus -- and the percentage of titanium alloys rose as well.

Use of titanium in autoparts is also growing. In the 2017 model of Nissan Motor's GT-R sports car, which the automaker released this year, a unique titanium alloy from Nippon Steel is used in the muffler. Known as Super-TIX 10CU, it has 1% copper added to the titanium and less oxygen, which makes it easier to process while also increasing heat resistance.

Materials that have excellent heat resistance and withstand corrosion are sought for automobile mufflers because of the high-temperature exhaust gases that pass through them. In previous models, stainless steel was used in the GT-R's muffler. Titanium is now employed because it helps make the vehicle lighter.

Many aficionados think titanium gives their car an appealing dry sound, and some owners of other cars swap out their stainless steel mufflers for titanium. Honda's CRF450R is the first mass-produced vehicle with a titanium fuel tank.

Nippon Steel titanium is also being used in the fuel tanks of Honda Motor's CRF450R motocross racing motorcycles, starting with the 2017 models. It is the first titanium fuel tank in a mass-produced vehicle. Working with Honda R&D, Nippon Steel improved methods for both press molding and welding. Because titanium is so strong, the tanks can be made thinner than is possible with the currently used resins.

Steel is the main material used in automobiles, but in recent years automakers have begun using more aluminum and magnesium to make their vehicles lighter. Titanium is much lighter than iron and three times as strong as aluminum. 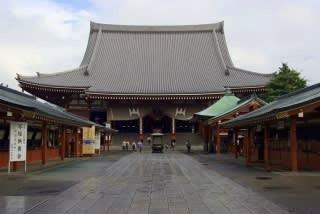 Titanium tiles cover the roof of Sensoji Temple in Tokyo.

A similar trend is also being made in aircraft manufacturing, which has been a leader in application of titanium. Kobe Steel is developing technology for titanium-aluminum and is producing prototypes of turbine parts for use in aircraft engines.

Titanium-aluminum weighs 4.2 grams per cubic centimeter, roughly half the weight of nickel alloys. Aircraft engines reach very high temperatures when in operation, but titanium-aluminum can withstand up to around 1,000 C, making it more heat-resistant than titanium alone or simple aluminum alloys.

This summer, workers began replacing the tiles on the roof of the five-story pagoda that stands in one corner of Sensoji Temple in Tokyo's Asakusa district. When the pagoda was rebuilt in 1973, tiles made of aluminum alloy were used. Those tiles are beginning to show corrosion and deformation, so some 57,000 of them are being replaced with titanium ones, which are highly resistant to wind and rain corrosion. Caname, a manufacturer of roofing materials, is producing and installing the tiles. Titanium provides the unique shine on the exterior walls of the Guggenheim Museum Bilbao in Spain.

Sensoji Temple switched to titanium for the roof tiles on its Hozomon gate in 2007 and on its main temple building in 2010. In the main temple building, the switch to titanium from traditional clay roof tiles reduced the weight of the roof by around 80%, from 930 tons to 180 tons. This increased its ability to withstand earthquakes, as the building's center of gravity was effectively lowered. During the March 2011 earthquake, not a single tile fell from the main building's roof.

Another characteristic of titanium is aesthetic -- when titanium is combined with oxygen, the film that results can express more than 100 colors, depending on its thickness. Thus, the roof tiles on Sensoji Temple look like traditional Japanese tiles.

Because it is not susceptible to corrosion, titanium is increasingly being used in marine structures. The pillars that rise from the sea to support D Runway at Haneda Airport in Tokyo are covered with titanium plates. The plates were developed by Nippon Steel & Sumikin Engineering. The roof of the Oita Bank Dome stadium in Oita contains special titanium that is resistant to discoloration. It was developed by Nippon Steel & Sumitomo Metal.

Large quantities of titanium were used in levees at Nago fishing harbor in Nago, Okinawa Prefecture. The life of steel sheet piles and steel pipe sheet piles that are used to hold back the sand that can silt up the harbor was extended by covering them with titanium sheets. A construction method was used that covered all parts of the levee wall that are exposed to seawater.

Levee walls are typically made of fiber-reinforced plastic. Titanium has an up-front cost that is around 20% higher than FRP, but it can last for more than 50 years, compared to around 30 years for FRP. The plastic has to be repaired twice during that time, so titanium is cheaper when the total cost is considered.

Titanium also prevents the dissolution of metal ions from the oxidization film covering the surface of metal parts, which can cause allergic reactions in some people. Therefore, it has come to be used in the frames of eyeglasses and other items that are part of everyday life. Because of its affinity with living organisms and because its flexibility is similar to that of bone, it is increasingly in demand for artificial joints, bones and teeth. Researchers have even begun to use titanium powder to produce artificial bones using 3-D printers. 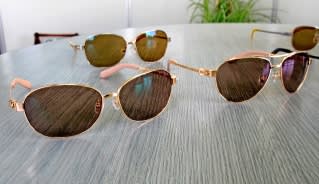 Titanium has found widespread use in the frames of eyeglasses.

This summer, Terumo paid some $380 million to acquire Sequent Medical, a U.S. company that produces an aneurysm embolization device made of a nickel-titanium alloy. The device transports a catheter from a patient's thigh into the blood vessels of the brain, where titanium mesh is inserted inside the aneurysm. This approach allows the device to be deployed in one pass, in contrast to methods that use coils and require multiple passes.