Spot, a four-legged robotic "dog," can nimbly negotiate stairs and rugged terrain, making it a potentially life-saving asset in emergencies.

WASHINGTON -- In the warfare of the future, most of the actual combat will probably take place between robots and other unmanned military equipment. The trend is well underway, as seen in the ongoing airstrikes on the Islamic State militants in Iraq and Syria using drones controlled by the U.S.-led coalition.

A variety of advanced technologies was unveiled at a recent exhibition organized by the Defense Advanced Research Projects Agency (DARPA), a unit of the U.S. Department of Defense. The primary function of some of the items on display was to efficiently attack enemies without exposing soldiers to the perils of the battlefield.

In his opening lecture at the "Wait, What?" Future Technology Forum, held Sept. 9-11 in St. Louis, Missouri, DARPA Director Arati Prabhakar asked the audience, "What future can be imagined from this time?" Prabhakar also told the audience, "Getting ready for whichever future unfolds -- that's the work of the Department of Defense."

Among the items on display were the LS3, or Legged Squad Support System, a rough-terrain robot designed to go anywhere marines and soldiers go on foot while carrying loads of up to 180kg. It was developed by Boston Dynamics, a Google-owned robotics company based in the U.S. 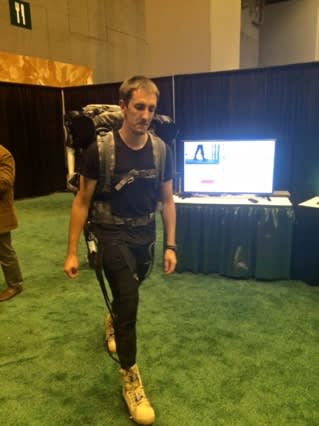 This robotic suit can help soldiers carry loads of 45kg or more.

Also there was Spot, a smaller four-legged robotic "dog" that can climb stairs and trot over uneven terrain. The robot demonstrated its excellent mobility, a characteristic that could help save lives in emergencies.

Look! Up in the sky!

Not everything at the event had legs. An unmanned flying vehicle on display featured a robotic mechanism that enables it to land on almost any kind of terrain, including steep slopes. Called the Georgia Tech Unmanned Aerial Research Vehicle-GTMax, it was developed by researchers from the School of Aerospace Engineering at the Georgia Institute of Technology, in Atlanta.

An unmanned underwater vehicle, also from the labs of Georgia Tech, is designed to detect the location of enemy vessels and relay that information to aerial drones equipped with weapons.

Also at the event were wearable robotic exoskeletons designed to help soldiers carry heavy loads of 45kg or more with ease and agility. Now under development by DARPA, these suits may eventually enable soldiers to run four-minute miles -- while carrying all their gear.

If the robotic suits bring out Iron Man-like capabilities in people, paddles developed by Draper Laboratory, headquartered in Cambridge, Massachusetts, turn warriors into Spider-Man. Inspired by the science that enables geckos to climb walls, the paddles give people the same ability.

The gear is said to be capable of supporting up to 300kg and would probably be used for sneaking into facilities and other stealth purposes.

The California-based Palo Alto Research Center -- credited with inventing the PC mouse -- presented a data-storage chip designed to self-destruct on command. It could prove useful for protecting top-secret information. This data chip shatters on command to protect sensitive information.

The glass chip shatters when the temperature rises to a certain level. When the "destruct" command is given, a laser beam hits a photo diode printed on the glass, sending a current to generate heat, which causes the chips to break. Infrared rays, radio waves and electromagnetic rays can also serve as the trigger.

DARPA was founded in 1958 in response to the Soviet Union's surprise launch the previous year of Sputnik, the world's first satellite. It was created at the behest of U.S. President Dwight Eisenhower, who wanted the government to invest in advanced technologies, even if they seemed out of reach. The agency fathered the Advanced Research Projects Agency Network, which became the basis for the Internet.

With the U.S. military's role in developing leading-edge technologies fading, the Defense Department saw the event as an opportunity to collaborate with private partners, such as researchers from Silicon Valley, universities and other independent institutes. Washington's spending on arms, when measured as a ratio of gross domestic product, has been decreasing in recent years.