TOKYO -- Augmented reality, or AR, could be on car windshields by the end of the year.

AR systems are set to become options drivers can choose when buying cars. They can superimpose route indicators, pedestrian alerts and other graphic information in the driver's field of view.

The technology promises safety and convenience enhancements, and is expected to take off around 2020, when more companies are expected to bring products to market.

German autoparts maker Continental is leading the way. This year it plans to mass-produce AR head-up displays -- translucent projections, sometimes referred to as HUDs, that allow pilots or drivers to see information without having to look down -- and market them to European makers of luxury cars. Augmented reality technology can incorporate the functions of conventional dashboards.

Japanese rivals plan to market their own AR options around 2020.

In automotive AR, text and images are imposed on a windshield right in the driver's line of sight. Some images can be made to appear relative to actual objects ahead.

The technology is becoming commercially viable thanks to advances in driver assistance systems that use cameras to recognize and map the immediate streetscape around a vehicle. These systems can now appear to "draw" lines right on the road that drivers can follow to their destinations.

The rapid adoption of these cameras has made them more affordable -- and relieved AR developers from having to build their own cameras from scratch, an expensive endeavor.

Automakers, too, are getting into the game. Last year, Germany's BMW unveiled a concept car loaded with AR features. Its system can, for example, impose an image to help the driver see a bicyclist in his blind spot. And the projected images move as the vehicle does.

BMW's Vision Next 100 concept, left, alerts the driver to the presence of, say, a bicyclist, top right, that might otherwise seem to come out of nowhere.

In Japan, Toyota Motor and Mazda Motor have started to study the possibility of introducing AR for the sake of safety.

As for this year, automotive AR is expected to be limited to simple functions, such as indicating what lane to be in. But in the years ahead, the systems will gain more skills, like imposing images on dangerous obstacles to make the driver more aware.

As self-driving technology advances and drivers are freed from steering, AR may create new business opportunities. One possibility is an automotive version of the "Pokemon Go" smartphone game. Such a game would impose characters on windshields to make the journey somewhat adventurous. Another possibility -- displaying ads from stores and other businesses a car is about to approach.

Automakers believe the leading AR technology companies stand a chance to gain a strong position in the automotive industry as they will obviate the need for all the gauges and displays on the dashboards of today.

The companies gunning for this kind of leverage include Continental, Denso and Nippon Seiki. Meanwhile, Konica Minolta and Pioneer are trying to enter the field by tweaking proprietary technologies.

Continental's technology combines a conventional HUD and a monocular camera originally developed for driver assistance systems. With the camera, the system can detect lane dividing lines and the vehicle ahead, then superimpose graphics accordingly. 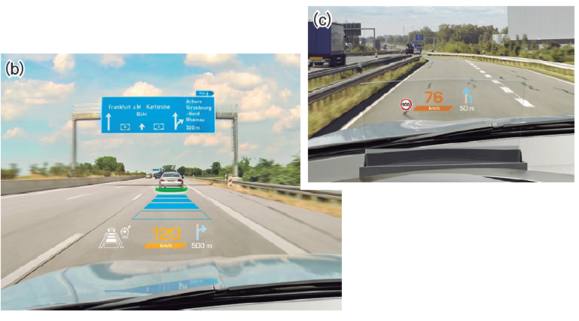 Continental's AR system can superimpose arrows on the road (a). Information that existing HUD systems display (c) is retained by the new system (b).

It uses arrows to guide the driver along the shortest route to his or her destination. In addition, it can impose lines on the vehicle ahead to indicate that the adaptive cruise control is engaged and the system is following that particular vehicle. It can also show a dotted line on the road between the driver's car and the one ahead to help the driver keep a safe distance.

In a prototype system, graphic images are made to appear as though they are 7.5 meters ahead of the driver's eyes. Information that is not directly related to the driver's view, such as speed, appears 2.4 meters ahead. This is the same as on conventional HUDs.

The images that seem to be imposed on objects are produced using a digital micromirror -- a device composed of a large number of tiny mirrors arrayed on a flat surface, each mirror representing a single pixel on a computer display. By changing the angle of the individual mirrors, the device can reflect light from a source so as to form desired images in specific locations.

Images created by this device are then magnified as they bounce off multiple concave mirrors set up behind the dashboard until finally they are projected onto the windshield.

Drivers need only keep their eyes on the AR-enhanced road ahead.

This story has been reorganized from an article originally carried in the June 2017 issue of Nikkei Automotive.