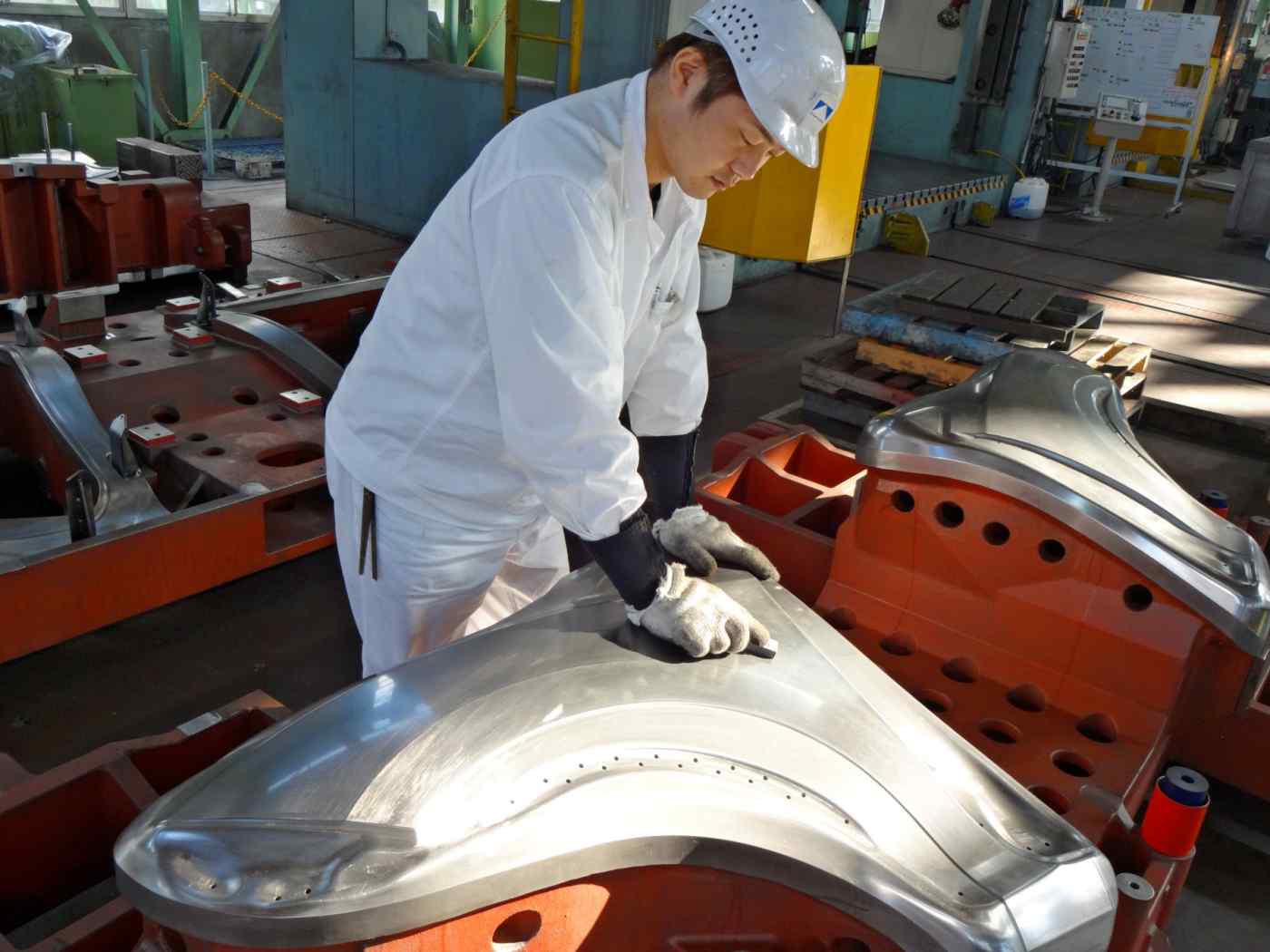 TOKYO -- Japan's die-makers were a driving force behind the country's rapid post-war industrial growth. But when car factories began racing to China, they left behind the companies and craftsmen who, for example, would help them bend sheets of metal into the shapes of door panels, fenders and other parts.

Many fell upon hard times.

Now one company is re-emerging, making a name for itself with cutting edge technology that can successfully shape sheets of aluminum, a notoriously fussy material to work with.

Six years ago, Fuji Technica seemed unable to stop the red ink at its main plant. It was as if each new die produced meant additional losses, insiders recall.

Times have changed, though, and early last year the company could afford to outfit its factories with the latest machine tools.

Those factories are now running at full capacity.

The wholly owned subsidiary of steel-sheet maker Toyo Kohan has two plants in the prefecture, west of Tokyo, where dies are produced that go on to press and shape auto bodies.

When The Nikkei dropped by the main plant, we got a glimpse of a frame for a Model S -- Tesla Motors' flagship electric vehicle. It's 100% aluminum and the pride of the workers.

That might be a bit of a misstatement. The engineers are indeed proud of the results of their efforts but they are equally proud of their collaborative back-and-forths with their peers from Tesla, based in the U.S. state of California.

Fuji Technica has also produced dies for the Model 3, a new Tesla that sports a futuristic design. The company has worked closely with Tesla from the early stages of development. The model, planned to be introduced in 2017, made headlines earlier this year when it received over 300,000 pre-orders in a week.

Fuji Technica representatives say Tesla is a demanding customer, insisting, for example, on retaining a smooth curve on an outer panel regardless of the difficulty it might give the die-maker. The company's engineers have established a good working relationship with the Tesla perfectionists, who heed constructive criticism, like, "We would have to redesign the die if this design were to be put into mass production."

Fuji Technica's advantage lies in its ability to create dies for shaping aluminum for mass-produced automobiles. Because aluminum is relatively light, it has become an essential material for carmakers scurrying to improve their cars' fuel efficiency.

But the metal is not easy to work with; sometimes it refuses to be pressed into certain shapes, Fuji Technica Director Norihiko Hoshi said.

Aluminum's malleability is one-third that of steel, so it tends to break if the shaping technique isn't just right. Or it will spring back to its original shape. Its hardness -- 60% that of steel -- also makes it prone to surface scratches.

Machine tools alone cannot create Fuji Technica's dies, which have to produce shapes that hone to meticulous specifications. Manual work is used to fine-tune the shapes of the dies. At the Shimizu plant, workers painstakingly finish surfaces using hand drills, but with cone-shaped file or sandpaper attachments.

The process requires highly skilled craftsmen who can work within margins of error measured in millionths of a meter, Hoshi said.

"It's this part of our process that makes the whole difference, when you want to manufacture a body with intricate or beautiful designs," Hoshi said. "Chinese and Koreans have a long way to go before they can catch up."

Before it re-emerged as a leading aluminum engineering company, Fuji Technica struggled for years.

Until the 1990s, its two predecessors -- Fuji Technica and Miyazu Seisakusho -- were leading die developers for Ford Motor and other global automakers. But they lost ground as Japanese automakers shifted their production overseas -- and competition from China and South Korea intensified.

In 2010, the companies underwent a government-led rehabilitation process.

Later that year, while shedding jobs and closing plants, the companies integrated their operations. Phoenix Capital invested in it in 2013. This past April, Fuji Technica became a subsidiary of Toyo Kohan, which made a successful takeover bid.

Since hitting bottom with a pretax loss of 2.9 billion yen ($28.2 million) in the year through March 2011, Fuji Technica has improved its balance sheet every year. In the 12 months through this past March, it booked a pretax profit of 1.4 billion yen.

One important change has been a new focus on China's luxury car market. As it sought an area where Fuji Technica's technology could capture opportunity without being dragged into excessive competition, management realized Chinese drivers are more focused on a car's sexiness than are Japanese buyers.

So the company targeted automaking joint ventures in China that include a large Western partner, like Volkswagen or Daimler. The strategy has succeeded in boosting orders, and Fuji Technica has become a leading name in the world of dies for luxury cars.

Now the company thinks it has something else to parlay into profits: a brand image polished by happy clients from California to China.