The future of photography looks lensless

Who needs glass when you have concentric circles and a math formula?

TOKYO -- New technology that will redefine the camera is coming. The question is when it will be ready for prime time.

Researchers are working on cameras that can capture still images and video clips without a lens. It turns out that pictures can be taken with just an image sensor superimposed with specially imprinted thin film. Since this would obviate the need for bulky lenses -- the film is a mere 1 micron thick -- the technology is likely to find its way into a range of fields and could completely alter the competitive landscape of the camera industry. 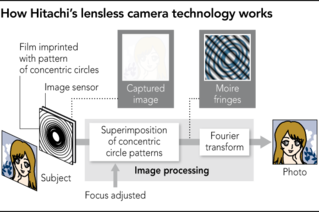 Compared with today's cameras, lensless models should be a lot cheaper to produce.

In Japan, the leader is Hitachi, which recently announced the development of the country's first lensless camera. Over in the U.S., Rice University and semiconductor developer Rambus are leading the way. At this point, Hitachi's technology stands out because of its speed.

Design-wise, the Japanese company's lensless camera is fairly simple. It comprises an image sensor superimposed with special film imprinted with a pattern of concentric circles. The film interferes with the light that passes through to the sensor. A computer calculates the extent of that interference and reconstructs the image.

For some time, the main quandary was how to process the light.

Hitachi came up with a solution by focusing on the moire fringes that are produced when patterns of concentric circles are superimposed on each other. With the fringes, the company realized it could capture images through a common processing technique called the Fourier transform -- used in everything from image processing and electron microscopes to signal processing and frequency separation for data communications. The use of a mathematical formula makes reconstructing images from light information a basic calculation any computer can perform.

Hitachi's system processes images as much as 300 times faster than other lensless cameras developed to date.

What is more, the focus can be adjusted after the image has been captured by the sensor.

Hitachi sees a wealth of opportunities in industrial machinery, robots and mobile devices. The compact gadgets could be incorporated into all sorts of production equipment and are well-suited to the internet of things.

The technology could also wind up in digital cameras for consumers. Smartphones sporting lensless cameras would be much thinner and lighter. High-end digital cameras could take on new shapes.

A number of technical issues still need to be resolved -- particularly the hazy look of the photos -- but Hitachi hopes to have a practical model ready in two years. It is aiming for resolution that is good enough for face recognition systems, according to Hiroyuki Mizuno, head of the company's innovation center for information and telecommunications.

Japanese companies have established themselves as leaders in the imaging business, but now they face the challenge of securing slices of the nascent lensless market.