TOKYO -- Construction of a skyscraper like floating wind turbine, the world's largest-class, is expected to be completed June 22 in Japan's northeastern Fukushima Prefecture. 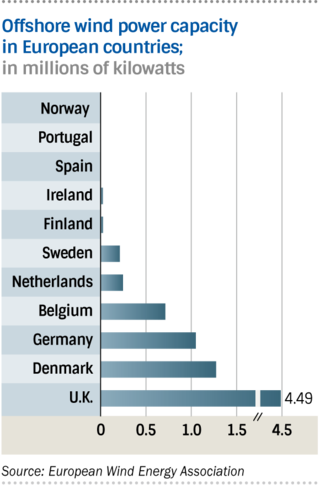 The government-sponsored project, carried out by some of Japan's best-known companies and university, is touted as a symbol of the rebuilding of Fukushima, which was devastated by the 2011 earthquake, tsunami and nuclear meltdown. The turbine will have the largest generating capacity of any offshore windmill in the world.

The port of Onahama in the city of Iwaki, forms a backdrop for the rising white tower and the massive crane used to erect it. The turbine, composed of three 82-meter-long blades and a 190-meter tower, is built to withstand wind speeds up to 300kph.

The Fukushima Wind Offshore Consortium, which is building the turbine and will operate it, includes trading house Marubeni, equipment maker Mitsubishi Heavy Industries, technology conglomerate Hitachi and the University of Tokyo.

The consortium received a mandate from the Japanese government to conduct studies on offshore wind power generation facilities. In late 2013, the first test turbine was installed off the coast of Fukushima Prefecture, 20km, with a generating capacity of 2,000kW.

The consortium is now assembling the second test turbine at Onahama. The structure, which weighs 1,500 tons, sits atop a 5,000-ton floating steel platform. Once construction is compete, the turbine will be inspected and adjusted. It will then be moved offshore, 20km from the wrecked Fukushima Daiichi nuclear plant.

The technical phase of test-operation is almost complete. So far, there have been no technical failures with the first turbine. The test operation of the second turbine will focus on ironing out the kinks to commercialize the technology. "Japan has lagged behind Europe in offshore wind turbine development, but with this success, we will be able to leap to the global forefront in this area," said Takeshi Ishihara, a University of Tokyo professor and consortium member.

The second turbine features state-of-the-art technology. Mitsubishi Heavy Industries introduced unique oil-pressure technology for the turbine's nacelle, in place of gears. The technology is said to be more resistant to the wear and tear caused by harsh conditions at sea.

Hitachi has developed an offshore transformer for the project. The electricity generated will be raised to around 66,000 volts and transmitted onshore via undersea cables. The idea is to send as much as electricity as possible through a cable, which have a capacity of around 20,000kW each.

The Fukushima project adopts a floating turbine that is anchored to the sea floor by eight 950-meter chains weighing 300 tons each. Conventional offshore turbines can only be placed in waters up to 50 meters deep. Japan, which is surrounded by deep waters, lends itself to floating turbines.

Projects similar to the one in Fukushima are underway in Scotland, and off the coasts of Hawaii and Oregon in the U.S.

The cost of the Fukushima project has been put at 50 billion yen ($401 million). Germany's Siemens is the global leader in offshore wind power. A joint venture between Mitsubishi Heavy Industries and a Danish wind power company Vestas Wind Systems  is No. 2.

With many new entrants from developing nations in the global wind power market, price competition in turbines is heating up. To spark new demand, it will be necessary to halve the cost of offshore wind farms. Balancing technology and cost will be key if wind power is to reach its full potential as an alternative energy source.