TOKYO -- What does the peel-off lid of a cup of yogurt have in common with a smartphone screen? They are both likely to benefit from next-generation nonadhesion technologies. These new ways of preventing things from sticking are also beneficial beyond the consumer sphere: Venice uses the new technologies to prevent flooding. 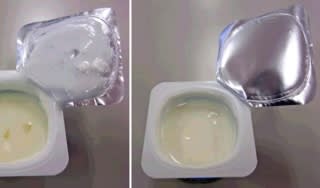 Toyo Aluminium wants you to wave goodbye to licking your yogurt lid.

Taking inspiration from nature, cutting-edge nonadhesion technologies may not lead to hit products, but it is likely to tweak designs on many everyday items.

Part of the yogurt eating ritual has always been licking the food off the foil lid. Over the course of a year, the yogurt stuck to lids worldwide is equivalent to the volume consumed in Africa, according to a calculation by Toyo Aluminium.

Morinaga Milk Industry is doing something about that: Its lids peel off clean with no stuck yogurt.

The company uses a special lid developed in cooperation with Toyo Aluminium. It is based on a packaging technology Toyo calls "Toyal Lotus." The material's structural inspiration was the lotus leaf, which is famous for its ability to shed water and remain dry.

How does the lotus leaf do this? Its structure pushes liquids up into droplets because of its very high contact angle.

Imagine a water droplet on a table, and consider the angle between the outer edge of this drop and the surface of the table. If the contact angle is smaller than 90 degrees, water has a tendency to spread out and wet the surface. On the other hand, a higher contact angle means the surface is more water-repellent, and will turn the liquid into droplets.

A water-repellant material, in addition, coats the yogurt lid, which is also processed to have microscopic protrusions similar to those on lotus leaves. These protrusions provide pockets for air that work to push back up against any liquid droplets that could fill the protrusions. Toyal Lotus is designed to keep in large layers of air. Screens get messy pretty quickly: Fingerprints, oils from the body, cosmetics, dust and skin flakes are not a nice mix.

Toray Industries has used nanotechnology to develop a protective film that repels more oil, keeping gunk from sticking to screens. It also has technology to spread out any oils that do stick.

The company did this by putting a small amount of lipophilic, or oil-friendly, material into a largely oil-repelling mix. The film reduces the amounts of stuck oils by half. Any oil that does manage to stick to the film is attracted by the lipophilic portions. This thins out smudges so screens do not appear to be as dirty.

Toray developed this technology for touch screens but is looking into applications for appliances and furniture.

Social infrastructure is also benefiting from nonadhesion technologies. A case in point are the floodgates of the Moses project, which protects the streets of Venice from flooding during high tides.

These steel floodgates rest on the seabed, surfacing at high tide. They are filled with air to bring them to the surface and form a giant wall between Venetian canals and the onslaught of the Adriatic Sea. Each gate is 3-5 meters thick, 20 meters wide and 20-30 meters tall.

The challenge is to keep barnacles, algae and other marine organisms from sticking to the submerged gates. To keep these unwanted guests off, the gates are coated with Bioclean, an anti-fouling material developed by Chugoku Marine Paints.

Bioclean is a silicon-based coating with a structure of alternating hydrophilic and hydrophobic materials. "Any adhesive cements secreted by marine organisms slip off, if they ever manage to attach in the first place," explained Kenji Yokogaki, manager of the company's offshore project marketing department.

From food to gadgets to social infrastructure, nonadhesion technologies are becoming ubiquitous.