It hasn't made much headline news, but the fact that India is now finally set to buy 15 US-2 seaplanes from Japan marks a significant breakthrough in Japan-India relations. It also is a harbinger of how growing India-Japan ties will transform Asia in the 21st century, and how other countries -- including China and the United States -- are going to have to catch up with this new geopolitical reality. 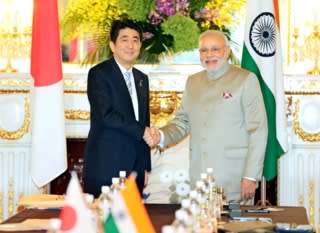 The prospective seaplane sale has been almost four years in the making, and many of the details -- for example, how much Japan and ShinMaywa Industries, builder of the US-2, will allow Indian companies to join in the aircraft's coproduction -- are currently being negotiated. Still, it will represent Japan's first overseas sales of defense items since Prime Minister Shinzo Abe eased Japan's defense export ban last year. Similar to Indian Prime Minister Narendra Modi's visit to Japan last autumn, it also sends a loud and clear message that a new strategic alliance is coming between Asia's two most important democracies.

India and Japan are of course the two biggest economies in Asia after China, and trade between them has been a staple of both economies for decades. But current trends are now pushing these two Asian economic giants together -- trends that not only include the rise of China, but growing doubts about America's strategic and military commitment to the region despite President Obama's assurances about a "Pacific pivot" and an "Asian rebalance."

The new India-Japan partnership isn't just about strategy and geopolitics. Economic calculations play their part as well. Prime Minister Modi, for example, clearly sees Japanese direct investment in India as an important component of his plan to get India's sluggish economy moving again. The number of Japanese companies operating in India has skyrocketed, from 267 in 2006 to over 1,800 in 2013 -- a sixfold jump in just seven years. Indeed, Prime Minister Abe's hopes of pushing Japan through its current economic doldrums have to include expanding export opportunities to India's population of more than 1 billion.

But above all, Abe and Japan are looking for a strong reliable partner to counterbalance the rise of an aggressive, militarized China. India is the perfect candidate. Both Japan and India have contentious territorial disputes with Beijing; both have watched China's decade of double-digit increases in military spending, from ballistic missiles to aircraft carriers and stealth fighters, with alarm. Both also correctly see China's new expansionist economic strategies, such as the Silk Road Initiative and the China-Pakistan Economic Corridor, as neomercantilist moves aimed at displacing Japan and India as trade rivals in Asia and the Middle East.

If Japan wants an Indian ally, it may have found the man it's been waiting for in Narendra Modi.

As prime minister, Modi has shown a willingness to pursue a closer relationship with Japan without being concerned about "optics," that is, how it looks from Beijing -- even though India-China economic relations remain closer than Japan might like. For example, India is a member of the Asian Infrastructure Investment Bank, while Japan is not.

On the other hand, it was New Delhi, not Washington or Tokyo, that suggested including Japan in this year's annual India-U.S. joint naval war games, known as the Malabar Exercises, something that Japan's Self-Defense Forces have wanted to join for years. Japan has participated before; but this will be only the second time Japan will join the Malabar maneuvers in the Indian Ocean, India's maritime backyard. Modi's government made the invitation without worrying whether it might "offend" China even though Beijing did take offense when the U.S. and India invited Japan plus Australia to join the exercises back in 2007, and managed to get New Delhi to call off the "quadrilateral exercises."

Elephant in the room

Part of the shift in India's policy has to do with the fact that, despite the need to maintain cordial relations with Beijing, Modi and Indian politicians generally have few illusions about China's ambitions in the region, which have become increasingly disruptive. China's growing economic and military footprint in Nepal, Pakistan, (where President Xi has pledged a $46 billion investment in infrastructure and energy projects), Sri Lanka (where Chinese companies helped to build a harbor at Hambantota that could be quickly converted to a naval facility), and the Seychelles have made Indians feel that China is trying to surround India, or even cut off India's access to the Indian Ocean. In addition, China's push to become the dominant naval power in the Indian Ocean poses a distinct challenge to India's assumption that its navy would be "ruling the waves" in the region after the British Navy's decline as a strategic presence.

This is just one reason why during President Obama' visit to India in January, he and Modi released a vigorous statement about protecting the principle of freedom of navigation, and why China's buildup in the South China Sea has India, like the rest of Asia, deeply worried. China's maritime aggressions pose a big opportunity for Japan to recruit India to its cause, whether it's upholding the principle of free navigation in the South China Sea or closer to home, in the East China Sea.

It's an opportunity the Abe administration is not likely to miss: building the strategic alliance with India is one of the keystones of his entire revamping of Japan's defense policy. Indeed, Japan's 2013 National Security Strategy as well as its National Defense Program Guidelines both mandate increased cooperation with India, including at sea. The guidelines state: "Japan will strengthen its relationship with India in a broad range of fields, including maritime security, through joint training and exercises as well as joint implementation of international peacekeeping activities."

Japan also has a "Security Cooperation Agreement" with India -- an agreement it previously had with only two other countries, the U.S. and Australia -- and in June 2012, the Indian and Japanese navies conducted their first ever Japan-India Maritime Exercise off the coast of Japan, which they repeated in 2013 in the Bay of Bengal.

This move toward closer strategic and military cooperation with India is especially important because the Obama administration continually drags its heels whenever it's asked to be Japan's forthright supporter in defending the Senkaku Islands, which China also claims, from Chinese aggression, including military action if necessary. Since World War II, the U.S., especially the U.S. Navy, has been the principal guarantor of security and stability around the Pacific Rim. Since 2011, India and Japan also participated in a trilateral strategic dialogue with Washington, at the Obama administration's suggestion.

Yet talk to Indian or Japanese officials, and one gets the impression that the consensus in both New Delhi and Tokyo is that the Obama "Asian rebalance" is largely talk without action -- and that if push comes to shove in dealing with China in territorial disputes, whether it's over the Senkaku Islands or over the stretch of the India-China border between Jammu and Kashmir, Japan and India may find a stronger partner in each other, than the U.S. promises to be in the future.

A new American president may change that perception, since the American impression of China is changing -- as is its view of Japan and India. Truth be told, the U.S. is finally waking up to the fact that the decades of time and effort it invested in trying to cultivate a relationship of constructive engagement with China may have been largely wasted, and that America's best partners in Asia are precisely the ones it took for granted or even overlooked: namely the continent's two biggest democracies, India and Japan. Indeed, the stronger Japanese and Indian ties grow in the meantime, the more the U.S. will come to see the value in joining both countries in a new geopolitical balance for Asia, both for now and in the future.

As for Japan, ties with India are probably not growing as fast as the Abe administration would like. Japan hopes for more "two plus two" dialogues between both country's defense and foreign ministers, something the Modi government has resisted -- although the prime ministers of both countries do have an agreement to meet at least once every year, an arrangement no two other Asian countries have.

As Indians themselves like to say, "Elephants never make sharp turns." But when they do turn, it's well worth the wait. 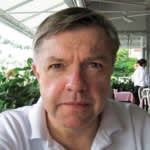 Arthur Herman is senior fellow at the Hudson Institute, and author of "Freedom's Forge: How American Business Produced Victory in World War II" and a forthcoming biography of Gen. Douglas MacArthur.