The time for waiting is over in Myanmar

Myanmar's government has made a priority of the peace process with ethnic armed groups since President Thein Sein came to power in early 2011. Peace, a political settlement and a nationwide reconciliation with all ethnic armed organizations are essential preconditions for Myanmar's future development. 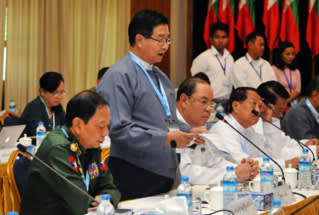 U Aung Min, the minister in charge of peace negotiations, leads an earlier round of talks at the Myanmar Peace Center in Yangon. (Photo by Steve Tickner)

The government has tried its utmost to accommodate the demands of various groups -- painstakingly and patiently engaging in innumerable rounds of talks aimed at reaching a nationwide cease-fire agreement. In the past few months, however, pragmatism has begun to supersede patience.