Alliances key to US leadership

TOKYO -- The U.S. and China are vying for top spot in the world order. William J. Burns, former deputy secretary of state and currently president of the Carnegie Endowment for International Peace in Washington D.C., recently talked to The Nikkei about the rise of China and the international role of the U.S. as well as the latest developments in the Middle East. Edited excerpts follow.

Q: How can the U.S.-Russia relationship be improved in the short term? 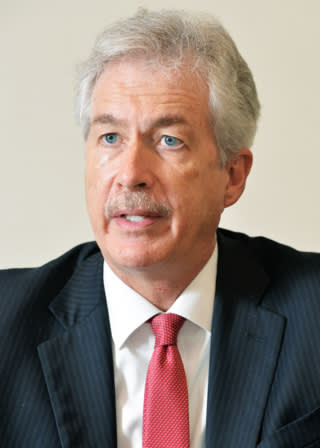 A: I have spent a good deal of my checkered diplomatic career navigating the complexities of the U.S.-Russia relationship. I've seen moments of great promise in that relationship, as well as periods of sharp and sometimes abiding differences. Russia's annexation of Crimea, its intervention in eastern Ukraine, its threatening behavior against its neighbors and its noncompliance with the Intermediate-Range Nuclear Forces Treaty pose the biggest threat to the vision of a Europe that is whole, free and at peace since the end of the Cold War. I think there is a broader challenge that Russia is likely to pose for the United States, for our European partners, for our other allies, for some time to come.

As vexing and threatening as Putin's Russia has become, it remains a consequential player, still a major producer of hydrocarbons, still a permanent member of the U.N. Security Council and still the keeper of the world's largest nuclear arsenal. And I think the United States can't ignore the reality of Russian influence -- even if objectively speaking that influence is weakening in some important respects, whether it's demographically or economically. There are areas where it's important to try to work with Russia, whether it's in big nonproliferation challenges like Iran or the DPRK (North Korea), nuclear issues more generally, or counterterrorism. It's in Russia's interest to deal with the problem of ISIS (the Islamic State group). That's not a favor to the United States.

The Minsk Protocol offers a sensible outline for a ceasefire in Ukraine and a return to diplomacy. Repairing the broader relationship will be very difficult. It will take time and most importantly the political will and wisdom to recognize that long-term hostility between Russia and the United States serves neither's interests.

Q: How should we deal with the rise of China, not only in the Asia-Pacific but globally?

A: The Asia-Pacific is the region of greatest growth and opportunity in the 21st century, and the place where the most consequential geopolitical trend of our time -- the rise of China -- is unfolding. That reality poses many challenges, but conflict with China is not foreordained.

We will need to manage a stable mix of cooperation and competition with China. This will require expanding areas of common ground, tough-minded management of differences, and a strengthening of partnerships and regional structures. Our alliances have to be at the core of that effort, and this is precisely why revitalizing the U.S.-Japan alliance and the relationship between our allies, especially between Japan and South Korea, is so vitally important.

Looking ahead, I do think the U.S.-China relationship is going to be central, not just to American foreign policy, but also to the evolution of the international system. And I think there's going to be a fair amount of continuity in the U.S. approach to China and, more broadly, in the significance that the U.S. attaches to the rebalancing of the Asia-Pacific, through the rest of President Obama's term and beyond that, no matter who gets elected President in 2016.

More specifically, on issues like the new Asian Infrastructure Investment Bank, I think there is space for new institutions, so long as we can complement existing ones, like the International Monetary Fund and the Asian Development Bank, that adopt high international standards. It's not so much whether those institutions emerge; it's how they're structured. And there, I think, both the United States and Japan should take an active and constructive interest to ensure that those standards are going to make it a workable, effective institution. That's the most constructive focus right now.

A lot depends on how the AIIB evolves, but down the line, if those standards are developed, then I see no reason that, in the future, the United States and Japan ought not to consider deeper cooperation or even membership.

And with regard to territorial disputes in the South China Sea, I do think that continuing to focus on international legality and on the value of diplomacy in dealing with these issues is going to continue to be very important.

Q: How do you see the recent developments in the Middle East, including the situation in Syria and ISIS?

A: The human tragedy in Syria and the broader region is very difficult to watch and impossible to ignore. The profound crisis of governance described in powerful detail in the Arab Human Development Report more than a decade ago, on which a variety of dictators kept a tight lid, erupted in recent years through domestic upheavals and external interventions.

Arab societies have struggled to fill the resultant vacuum and define an affirmative vision for what comes next. There is no shortage of players with their own answers to that question. ISIS preys on Sunni Arab disaffection and rootlessness, Iran sees opportunities to strengthen its own position and embattled authoritarian regimes in the Sunni world seek to reassert themselves.

Whether Arab states find pathways to pluralism and economic modernization is not ultimately an American -- or Japanese -- choice.  There are, however, ways in which we can help shape the circumstances in which that overarching question gets answered, whether by contributing to a sense of order and equilibrium in the region in the near-term, or offering more energetic investment in modernization over the long-term. ISIS is in particular is a dangerous and deeply disruptive force, and it is important for the United States to continue to lead a broad coalition to steadily roll back its gains in Iraq, supporting a sustaining political-military strategy on the part of the Iraqi government to include Sunni Arabs in Iraq's future.

Q: What did you think of the latest visit to Washington by Japan's Prime Minister Shinzo Abe?

A: I believe that the treaty alliance with Japan is -- and will remain -- the cornerstone of U.S. engagement not only in the Asia-Pacific but also around the world. Prime Minister Abe speaks of a Japan that is a "proactive contributor to peace." That is a vision that the Obama administration and the U.S. Congress support. I think the warm reception Prime Minister Abe received on Capitol Hill in April is a very good indicator of the strong bipartisan foundation for strengthened partnership. On every major issue -- from North Korea's troublemaking to the refugee crisis in the Middle East and climate change to sustainable development -- the U.S. and Japan achieve much more when they work together than when they work apart.

Q: How do you view the global role of the U.S. in the 21st Century?

A: There is no denying that the international landscape is becoming more complicated, more crowded, and more competitive. But I remain an optimist about American leadership and about the continuing capacity of the United States -- working together with its allies and partners -- to shape a regional and global order that protects American interests while benefiting the broader international community.

America is at its best when it works in close cooperation with strong allies. I have long appreciated the significance of the U.S.-Japan alliance. It really is the cornerstone, I think, of what the United States wants to do strategically in Asia for many years to come, and certainly the U.S.-South Korea alliance is extremely important as well.