The landslide electoral victory of Aung San Suu Kyi's National League for Democracy in November was a watershed moment for Myanmar. As in 1990, some two-thirds of the electorate said out with the military-backed old regime and in with a more accountable and democratic government. Mainstream ethnic political parties may have been disappointed at their poor showing in the 2015 polls, but overall the results were greeted with great enthusiasm and joy. After decades of struggle and violent repression, it seemed that at last, Myanmar was entering a new phase of democratization. 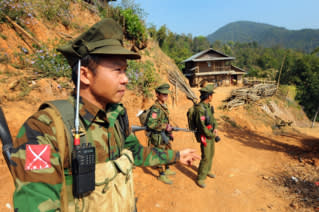 It is yet to be seen whether Suu Kyi can maintain her policy of cooperation with the military and ensure a smooth transition from former President Thein Sein's semicivilian regime. Although the 2008 constitution prohibits Suu Kyi from becoming president, her party's electoral victory ensured that Htin Kyaw, her loyal friend and supporter, was sworn in as the country's top leader, allowing "the Lady," as she is known, to steer policy and government from a position she described as "above the president."

Not many years ago, few would have expected such a radical transition to be possible. In all the excitement, it is worth observing that things could have worked out differently. Thein Sein and his team deserve credit for initiating and overseeing these changes. Nevertheless, serious obstacles remain before Myanmar can complete its difficult transition.

There are no genuine examples of liberal democracies in the region. Most likely is that Myanmar will become an example of the "new normal politics" in Southeast Asia -- a hybrid regime, with an elected executive, powerful military, and deeply entrenched elites dominant in much of politics and, particularly, the economy. Despite the transition to a civilian-led government, the Myanmar Army retains control of three key ministries, including the Ministry of Home Affairs and its General Administration Department, which runs much of the country on a day-to-day basis. Furthermore, entrenched "crony capitalists" -- many intimately connected to the military hierarchy -- remain hugely influential and will have opportunities in a newly open and expanding economy to further deepen their wealth and influence.

Another important and unresolved aspect of these transitions is the future of ethnic politics in Myanmar. For decades, armed ethnic groups, representing minority communities that make up more than one-third of the population, have been struggling for self-determination. Most of these groups agreed to cease-fires with the previous government. Eight went further, and in October signed a Nationwide Ceasefire Agreement with the outgoing regime and the powerful armed forces, known as the Tatmadaw.

Joint monitoring mechanisms have been launched, with implementation being rolled out in parts of Shan State and the Tanintharyi Region. Furthermore, a political dialogue was initiated in January, bringing together the outgoing government, the Tatmadaw, the NCA signatory groups and elements of civil society. Whether the new government will be willing to continue the peace process and associated political dialogue is yet to be seen. Indications are that Suu Kyi will, for the time being, continue the previous government's approach -- not least because the Tatmadaw has signaled its support for the NCA and presumably told the NLD this is part of the price for civilian rule.

In the longer term, however, it seems probable that an NLD government will press the restart button on the peace process. The NLD has already appointed a number of its ethnic members to key positions in the Union and state parliaments -- and even to the vice presidency. More significantly, it has just announced the creation of a Ministry of Ethnic Affairs. This is a welcome development; it indicates the next government will seek to address ethnic issues on its own terms.

Since it first entered parliament by sweeping the 2012 by-elections, the NLD has seen political legitimacy as stemming from participation in parliamentary politics -- preferably through working for the NLD -- not as something achieved through armed struggle. In the longer term, therefore, it seems unlikely that ethnic armed groups will continue to enjoy the privileged position as principal representatives of minority communities that they gained under the previous government.

Key ethnic armed groups enjoy significant legitimacy among the communities they seek to represent, although this is often contested by other stakeholders. There is a risk that an NLD-led government will sideline or ignore ethnic armed groups, preferring instead to work with co-opted ethnic elites, from within or in alliance with the NLD. In this case, the NCA may prove to be a high watermark in the ethnic armed groups' political leverage.

On the ground, the peace process has resulted in huge improvements in living standards of conflict-affected communities in areas where cease-fires are holding. Across southeast Myanmar, villages are seeing increased possibilities of movement and better livelihood options. For these villagers, the peace process is a very positive development.

At the same time, the cease-fires have allowed greater access to conflict-affected areas for extractive industries, such as logging and mining. Therefore, for many communities in areas affected by cease-fires, positive benefits have to be balanced against experiences of -- or concerns regarding future -- land confiscation, and the incursion of still-militarized government structures into previously semi-autonomous, predominately ethnic areas.

In other parts of the country, including much of northern Kachin and Shan states, and parts of Rakhine in the west, civilian populations have experienced little respite. The Tatmadaw has launched new military campaigns against those ethnic armed groups that did not sign the NCA. Is this Myanmar's new reality? A civilian government taking partial control over areas where cease-fires have been agreed to, while the Myanmar armed forces continue to operate by emergency decree and use of systematic violence in areas where cease-fires are not in place. If so, ethnic communities across much of the country will continue to suffer from violence and exclusion, regardless of any change of government in Naypyitaw.

Another issue yet to be resolved is intercommunal violence, particularly the relationship between the majority Buddhist population and Myanmar's Muslims. The exact number of Muslims in the country is unknown, but when results of the 2015 census are announced later this year, they may show the Muslim population to be greater than expected. This would be largely due to distorted data in the 1983 census, not to massive immigration.

However, reactions to the census results could be manipulated by unscrupulous politicians to reignite simmering tension between religious communities. One of the greatest challenges facing the new government is how to deal with intercommunal violence -- a problem more intractable than conflicts with ethnic armed groups. While ethnic insurgency can, in principle, be resolved through negotiations between political elites, intercommunal violence is far uglier and intractable.

As Myanmar enters a new era, there are many reasons to be optimistic -- but there are also storm clouds ahead. If, however, there is continued progress through to the next election, in 2020, we will not have to look back at the previous half-decade as "golden years," when there was still so much to hope and struggle for.

Ashley South is an author and research fellow at the Centre for Ethnic Studies and Development at Chiang Mai University.