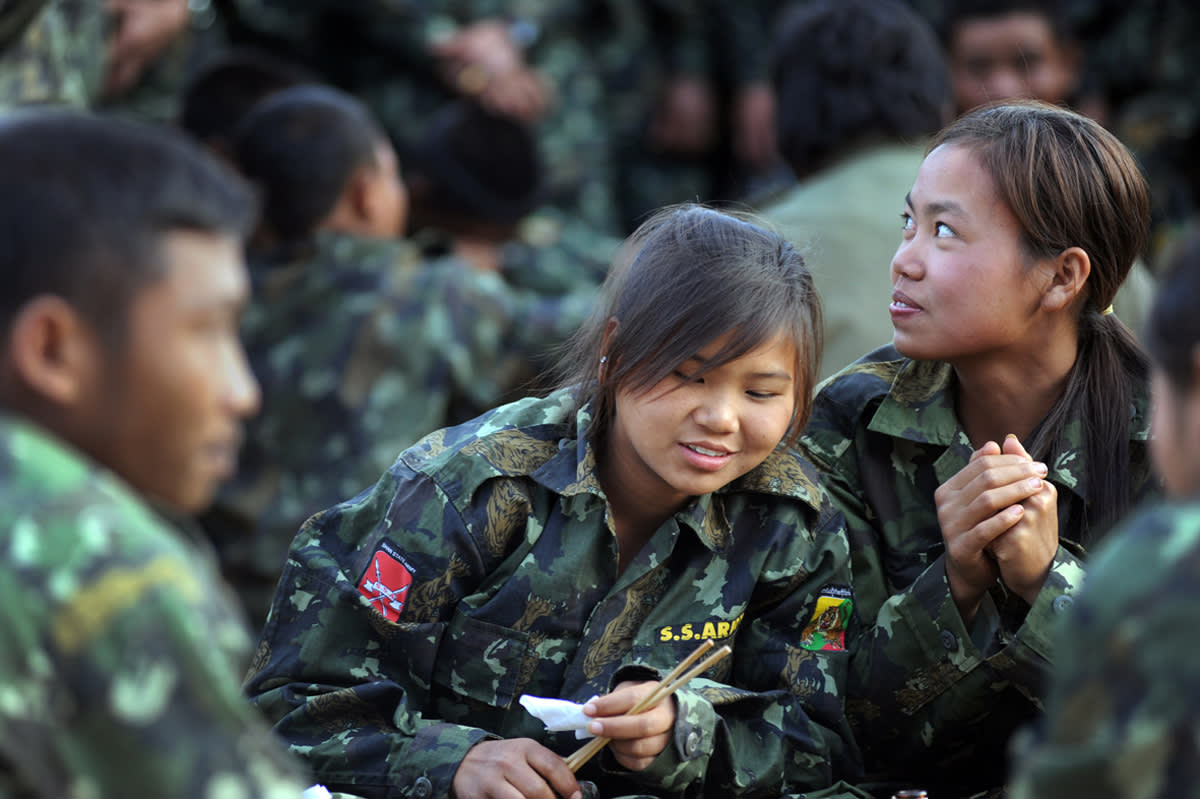 Female soldiers from the Shan State Army South, at their Loi Tai Leang base near the Myanmar-Thai border.​ (Photo by Steve Tickner)
August 22, 2016 22:25 JST | ASEAN
CopyCopied

Preparations are underway in Myanmar's capital, Naypyitaw, to hold a Union Peace Conference, or national level talks with ethnic armed groups, from Aug. 31. The gathering is sometimes referred to as the "21st Century Panglong" conference, in recognition of a February 1947 meeting held in the town of that name in northeastern Shan State. At the original Panglong talks, ethnic leaders met with independence hero General Aung San, father of the country's de facto leader Aung San Suu Kyi, and agreed to work together to achieve an independent Burma.

Although the Panglong Agreement did not mention federalism, it did guarantee ethnic states "significant autonomy in matters of internal administration." After decades of devastating armed conflict, hopes are high that the "Panglong spirit" can be revived, and political negotiations lead to establishing a federal union of Myanmar. One of the biggest unknowns is whether the powerful Myanmar military will be willing to countenance the type of restructuring and reimagination of the country which would satisfy ethnic leaders' demands for self-determination.

The talks call for much wider participation than the original meeting more than half a century ago. However, "inclusiveness" is still a potential stumbling block. Myanmar's military (or Tatmadaw) has been reluctant to allow the participation of three relatively small ethnic armed organizations, unless they issue statements symbolically committing to disarmament. A week ahead of the conference, the two sides were trying to reach a compromise.

There are questions also regarding the role of the country's diverse civil society actors. Many of those in non-government and community-based organizations have long seen themselves as partners of Aung San Suu Kyi's National League for Democracy. Now, under an NLD-led government, tensions are emerging between the old allies, with some activists accusing the new government of heavy handedness. With the exception of some specially invited individuals, civil society groups will be absent from the peace talks, although they will be encouraged to participate in a separate process feeding into the overall political dialogue.

Over the past few weeks, some commentators, and key ethnic leaders, have criticized the scramble to work out both the agenda and procedures for the Union Peace Conference. Initially, there was a risk that this would be a one-off event, leaving little time to discuss the many pressing issues. It has now been agreed that the August event will launch a series of such meetings, to be held at the Union level every six months.

The previous government, led by President Thein Sein, made considerable progress on the peace process and other reforms. There was a rush at the end of his term to consolidate some of the achievements in the peace process through a nationwide ceasefire agreement. Although it was only signed by eight of the country's 20 or so ethnic armed organizations, as well as Thein Sein and the military's commander-in-chief, the agreement was crucial to establishing the forthcoming Union Peace Conference.

For State Counselor Aung San Suu Kyi, the peace conference is a priority, and an important legacy of her father's unfinished business. Her commitment to the peace process, and finding a federal solution to the country's state-society, majority-minority conflicts is admirable. However, the timing is explained by more practical concerns. Suu Kyi will visit the United States in September. Her visit is likely to elicit some criticism, and perhaps even protests, over the perceived lack of progress in addressing intercommunal tensions in Myanmar, and particularly the marginalized status of minority Muslim Rohingya communities in Rakhine State. Suu Kyi appears to have calculated that concrete progress in relation to the peace process with ethnic armed organizations will buy her some space in relation to the more intractable problem of resolving communal tensions and building intracommunal peace.

Another key consideration is the role of China, from where Suu Kyi has recently returned from an overseas trip. She will have discussed Chinese aid and investment in Myanmar, including the fraught issue of the Myitsone Dam, an infrastructure project in Kachin State in northern Myanmar that was suspended under Thein Sein in late 2011. China has indicated its anxiety to restart the project, although doing so is virtually a political impossibility in the context of Myanmar politics.

Chinese officials, in Beijing and also Yunnan Province, just across Myanmar's northern border, have considerable influence over the ex-communist Wa and Mongla groups, whose agreement to participate in the forthcoming talks has helped to build momentum around this event. These groups did not sign the nationwide ceasefire agreement, because it is more than two decades since they have fought with the Myanmar military. Chinese involvement in the Myanmar peace process has heralded a new form of Chinese international engagement. It is partly based on a calculation that good relations with the new Myanmar government will counterbalance the NLD's friendly relations with the West, and prevent China from losing further influence over its neighbor.

The involvement of Wa and Mongla groups is a reminder of the complexity and diversity of Myanmar's conflicts, and ongoing conflict in some areas. It will be difficult to talk of a genuine and sustainable peace while the Myanmar military continues to clash regularly with the Kachin Independence Organization and other armed groups in the north. If the Union Peace Conference is to succeed, the KIO will need to attend, and the Myanmar military will have to stop fighting in the north, as it has already across southeast Myanmar.

In early 2012 the Karen National Union -- historically, the country's most important ethnic armed organization -- agreed a ceasefire with the government. Over the course of numerous visits to remote and conflict-affected communities in the southeast, I have often been told by villagers how much they welcomed the peace process, which some described as transformative. Communities devastated by decades of fighting and abuses have benefited from significantly reduced levels of fear, and greater freedom of movement. Of course, many problems remain, including widespread land-grabbing and increased natural resources extraction by unscrupulous and well-connected companies. Local communities often lack "voice" in discussions around the peace process They tend to be only marginally interested in the details of political discussion, and concerned about the realities of day-to-day survival.

There is a gap in structures to support Myanmar's peace process, between these necessary political dialogue and monitoring arrangements. The country's major ethnic armed organizations control sometimes extensive stretches of territory, and can exert authority over even larger areas of "mixed administration," where authority is shared, or contested, with the government and the Myanmar military. Groups like the KNU and KIO demonstrate state-like governance in their areas of control, and deliver sometimes extensive services to conflict-affected communities.

The existing nationwide ceasefire agreement acknowledges the role of signatory groups in the fields of health and education, security and natural resource management. However, there is no mechanism to manage relationships between ethnic armed organizations' governance authorities and service delivery systems, and those of the state. There is a need to develop interim arrangements, in order to manage relations between state and non-state authorities and service delivery systems, during the likely extended period of political negotiations, before a comprehensive settlement to decades of conflict can be agreed. The risk otherwise is that state structures will displace existing local arrangements. This would represent a missed opportunity, as ethnic armed organizations and their civil society partners demonstrate significant capacity, can often reach communities not accessible to the state and its international partners, and are perceived locally as more legitimate than the central government.

Finding ways to support ceasefires on the ground is a necessary, if not sufficient, component of deepening the peace process and ensuring sustainability. It will also be important to ensure that the forthcoming political dialogue, including particularly discussions at the sub-national level, is structured in a way that allows for real participation on the part of all communities. This includes members of the country's Burman majority, who may otherwise feel excluded from discussions aimed at reimagining and restructuring the future of their country.

Ashley South is an author and research fellow at the Centre for Ethnic Studies and Development, Chiang Mai University.