High debt levels relative to income are a common challenge among governments of advance economies, but the severest in Japan.   © Reuters
November 29, 2016 13:00 JST | Japan
CopyCopied

High debt levels relative to income are a challenge confronting the governments of virtually all advanced economies, but nowhere more so than in Japan. The path ahead might be discerned from the path of history. 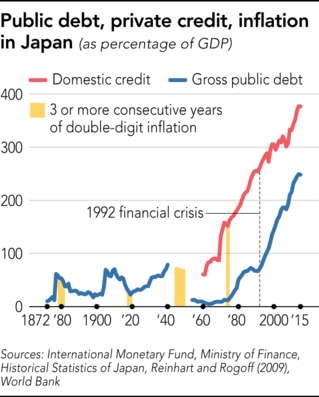 Experience teaches that countries reduce debt relative to their income in five ways: economic growth, substantive fiscal adjustment or austerity plans, explicit default or restructuring of private and/or public debt, a surprise burst in inflation, and a steady dose of financial repression that keeps real interest rates low (usually negative). The last two options -- inflation and financial repression -- are only viable for debts denominated in domestic currency. Since all of Japan's public debt and nearly all of its private debts are denominated in yen, all these debt reduction possibilities are feasible.

The ideal resolution to a debt overhang is, of course, to grow vigorously. But in reality, even in an earlier era when the population was growing rapidly and technology facilitated productivity gains, sustained debt reduction usually also involved a combination of "orthodox" policies (fiscal adjustment) and less orthodox ones (inflation, financial repression and debt restructuring).

Government tax hikes and expenditure cuts are comparatively well understood, unpopular with the public at large, and therefore often politically contentious. Surges in inflation and outright default, usually in the midst of a deep economic crisis or a war, are invariably headline news. By contrast, subtler forms of debt restructuring and financial repression are opaque and don't usually require voter approval.

Rising private leverage fueled the twin equity and real estate bubbles that burst at the end of the 1980s and set the stage for Japan's banking crisis in the 1990s (see chart). The resistance by policymakers and bankers at that time to write off the towering mountain of nonperforming loans meant that the resolution of that crisis was delayed. The socialization of those costs was reflected in an immediate and marked deterioration in public finances and an unremitting buildup of debt that, as shown in the chart, persists to this day.

A variation of Japan's experience was subsequently played out in other advanced economies, ranging from the U.S. and U.K. to Iceland and, most notably, much of the eurozone. Now eight years after the global financial crisis, these economies collectively face, in varying degrees, a debt overhang. Japan is at the top of this list.

Gross public debt in the wealthy economies is near its all-time World War II highs -- about 93% of gross domestic product. But, as the chart highlights for Japan, the public debt figures significantly understate the magnitude of the debt surge in recent years by excluding record private borrowing -- particularly by banks -- which remains a major possible contingent liability of governments. Steadily rising pension liabilities add to the scale of contingent debt.

What is financial repression?

As they have historically in the aftermath of financial crises or wars, central banks have been increasingly resorting to a form of "taxation" that helps liquidate the huge overhang of public and private debt and eases the burden of servicing that debt.

Other features of financial repression vary across countries and time. In the past, measures also included directed lending to the government by captive domestic entities (such as pension funds or banks), explicit or implicit caps on interest rates, regulation of cross-border capital movements, and generally a tighter coordination between governments and banks -- either explicitly through public ownership of some institutions or through heavy "moral suasion" by officials. In connection with keeping interest rates low, regulatory policies with financial repression features aim to create or expand a captive audience for government debt; Basel III rules fit this mold, as they provide for the preferential treatment of government debt in bank balance sheets.

In the early 1880s and again after World War I, stints of double-digit inflation (see the shaded areas in the chart) significantly reduced Japan's earlier public debt buildups. More notoriously, the hyperinflation of 1944 to 1949 -- the cumulative increase in prices was over 10,000% -- nearly liquidated the entire stock of domestic debt.

As I have documented elsewhere, not all debt reduction methods were so draconian. In Japan, the U.S. and other advanced economies, financial repression contributed to the post-World War II steady reduction in debt. Up until 1980, real interest rates in the advanced economies were negative half of the time, despite the fact that the postwar landscape was not plagued by either secular stagnation or a chronic global saving glut. In the 1970s, real interest rates were negative in part because inflation spiked unpredictably after the OPEC-driven surge in oil prices. But more akin to today, real interest rates in the 1950s and 1960s were negative because nominal rates were kept low by central bank policies and financial regulation. In the U.S., Japan and Europe, negative real short-term interest rates have been the norm since 2008. Given that deflation has proved tough to eradicate in the latter two, the Bank of Japan and the European Central Bank have since moved on to adopt negative (nominal) interest rate policies.

But "one size fits all" seldom applies to financial repression. For the U.S., record purchases of Treasurys by central banks around the emerging world have also played a significant role in keeping nominal and real interest rates low in the past decade. Japan, unlike the U.S. and Spain and more like Italy in this regard, has financial institutions (banks, postal saving, pension funds) that are already holding a comparatively high share of government debt in their portfolios. Financial regulation and moral suasion have not attempted to create a new layer of demand for government bonds. On the contrary, the thrust of recent efforts has been to get the private sector to rebalance out of yen assets and, in so doing, foster a depreciation of the yen.

Potentially constrained by running out of bonds to buy, Gov. Haruhiko Kuroda announced that the BOJ would intervene to make sure that the nominal yield on the 10-year JGB does not move into positive territory. The ceiling on the long bond was heralded by many as a novel feature of unconventional monetary policy. In fact, interest-rate caps were a feature or wartime finance in the U.S., with a ceiling on the long bond in place from 1942 through 1951.

By capping the 10-year JGB yield, the BOJ has put in place automatic accommodation should inflation rise. If inflation does pick up, the real yield would become even more negative -- weakening the currency, putting pressure on inflation to rise, eroding the value of existing debt and (ideally) boosting spending in the process. Without some inflation, even a moderate level, financial repression will not deliver debt reduction.

The problem the BOJ faces now is that it has no direct mechanism to push inflation higher. The problem that the BOJ will likely face in the future is that it will also not have a precise mechanism to stop it, once inflationary momentum increases. But, as the saying goes, "We'll cross that bridge when we come to it." In the meantime, some of the world's major central banks will become even bigger players in purchases of government debt, possibly for the indefinite future.