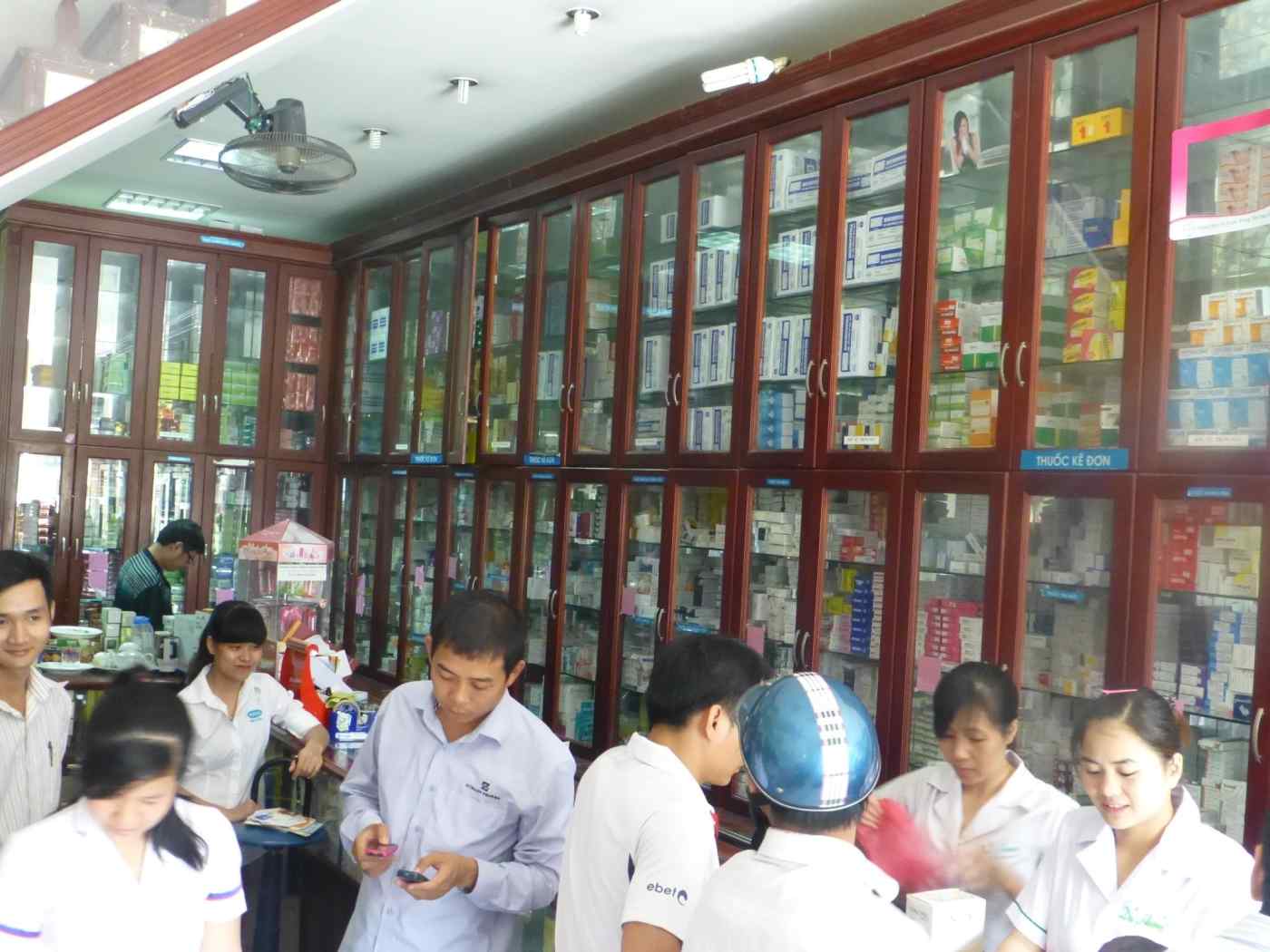 After a month of exhaustive coverage of the vaccine scandal in China, the facts of the story have crystallized as have theories about how nearly $90 million worth of expired or improperly stored doses could have reached consumers. But little attention has been paid to Vietnam where a similar scandal is unfolding, albeit on a smaller scale.

In China, blame has been placed on the country's fragmented vaccine supply chain. In particular, criticism has been leveled at the lack of regulation of cold chain distribution, leading to vaccines routinely being stored below or above the optimal temperature range of 2-8 C. Some commentators add that the Chinese Communist Party leadership deserves criticism for choosing to invest in an increasingly draconian security and censorship infrastructure but neglecting regulatory agencies such as the woefully understaffed China Food and Drug Administration.

In Vietnam, parents have been putting off vaccinations for infants following the deaths of 20 babies over the last four years linked by the media to the 5-in-1 Quinvaaxem vaccine, manufactured in South Korea and distributed in Vietnam by Berna Biotech Korea as part of Vietnam's National Immunization Program. Like other vaccines distributed through the program, Quinvaaxem is free to patients, but parents across the country have either decided to let their children go without it, potentially exposing them to diphtheria, tetanus, pertussis, hepatitis B and Haemophilus influenzae type b, or pay $24 per dose for Pentaxim, an alternative manufactured by France's Sanofi Pasteur.

As in China, a lack of cold chain facilities has been cited as a key reason for spoilage of the Quinvaaxem vaccine. The World Health Organization has tested Quinvaaxem and proclaimed it safe, implying that whatever dangers arise from its use occur between its South Korean production site and the administration of the vaccine.

Moreover, as noted by Vincent Goulard, managing director of IPS Vietnam, a pharmaceutical consultancy, cold chain storage is almost nonexistent except for facilities run by international companies such as DKSH Vietnam and Zuellig Pharma. However, these foreign companies do not handle government vaccines, which are controlled by the Ministry of Health and public hospitals. It is not unusual, in domestic supply chain practice, to see drugs sitting on the pavement, negating the benefits of cold storage in public hospitals and clinics.

As in China, Vietnam's vaccine troubles are taking place against a background of systemic healthcare problems. The country's healthcare system is characterized by overburdened hospitals, a lack of public trust in domestically made drugs and a fragmented pharmaceutical supply chain that shields irresponsible suppliers from supervision.

Some see this neglect of the healthcare system by the Vietnamese Communist Party as a political choice, similar to the one that has held back the development of China's healthcare system; in both countries, economic growth and the protection of party interests have taken precedence over healthcare system development. In this context, the problems will get worse before they get better.

It is easy enough to draw a public health analogy between China and Vietnam. Both have focused policymaking on economic development at the expense of social services and have allowed political cronyism and corruption to dominate the government apparatus, leading to eerily similar results in the healthcare industry.

Both countries' leaders are facing politically damaging vaccine scandals and a further erosion of public trust in domestic drug manufacturers and suppliers. The public cannot be faulted for questioning the safety of vaccines in countries that have 21st century economic ambitions but have neglected to upgrade their mid-20th century healthcare infrastructure.

For foreign pharmaceutical companies, Vietnam's ability to prioritize the strengthening of its healthcare delivery system and its drug and vaccine supply chains will be critical to their long-term success. Vietnam is one of the last places where pharmaceutical market growth is projected to remain in double-digits over the medium term, a prospect that will be solidified once the Trans-Pacific Partnership, the wide-ranging trade agreement between Vietnam, the U.S. and 10 other countries, has been ratified.

With a young population and with operating rights for foreign pharmaceutical companies still newly granted, Vietnam's pharmaceutical market is only beginning to take off. Virtually all its problems mirror those of China 15 years ago, when foreign companies enjoyed preferential treatment in the tendering process, the population was still relatively young and the middle class was quickly expanding.

Foreign pharmaceutical companies went wrong in China by chasing profits rather than pursuing global-standard sales practices. Companies and Chinese hospitals focused on increasing profits from drug sales while the government turned a blind eye to the failing healthcare system. Against this backdrop, all the problems of the healthcare system were projected onto foreign companies, making them easy political targets.

A series of hardline government inquiries into pharmaceutical companies began in the summer of 2013 when several executives of U.K. group GlaxoSmithKline were arrested on charges of bribing doctors to prescribe certain drugs. The move was widely praised by the Chinese public, but condemned by the foreign business community and foreign press. Several GSK executives were convicted in 2014.

By 2015, growth projections for foreign pharmaceutical companies operating in China had been significantly revised amid swelling fines doled out by local regulators and the risk of anti-corruption penalties in jurisdictions such as the U.S. and the U.K.

Whether the future of foreign companies in Vietnam will mirror the fate of those in China may depend not on the two markets' similarities, but on one key difference: Unlike China, Vietnam is heavily dependent on imported raw materials to manufacture drugs and vaccines.

This dependence makes it more accountable to foreign healthcare organizations than China is. Consequently, the international community may be able to put pressure on Vietnam to prioritize its cold chain vaccine practices and to invest in its broken healthcare system. If foreign companies feel unable to do this, the job should be given to diplomats who have access to Vietnam's decision-makers.

The need for healthcare diplomacy must be taken seriously. The international community must use a combination of pressure and aid to assist Vietnam in speeding up the development of cold chain capacity and healthcare system reform. Otherwise, foreign pharmaceutical companies, lumped in with other corrupting influences that have made healthcare inaccessible to most, will acquire an insurmountable reputation as corruptors in the minds of Vietnam's citizens.

In the wake of TPP, there is a real risk that concessions won by foreign pharmaceutical companies -- the elimination of import taxes and a more level playing field in bidding against domestic drug manufacturers for public tenders -- will become politically toxic.

That might make the concessions ineffective in practice, even if they remain in force on paper. Companies from the U.S., U.K. and Japan are providing good, safe products, but rising foreign pharmaceutical profits in the face of ever-worsening drug and vaccine access for Vietnamese citizens would leave a sour taste in the mouths of many.

Such an outcome could potentially derail the sales operations of pharmaceutical companies in Vietnam more quickly than was recently witnessed in China. On the other hand, the government's susceptibility to foreign lobbying creates the potential to save foreign companies from the fate that befell them in China.

Which of these outcomes occurs depends on the willingness of Vietnam's international allies to push for immediate reforms in the healthcare system and the pharmaceutical supply chain.

Damjan DeNoble is a partner at Rubicon Strategy Group, a health care business consultancy that focuses on China and Southeast Asia.