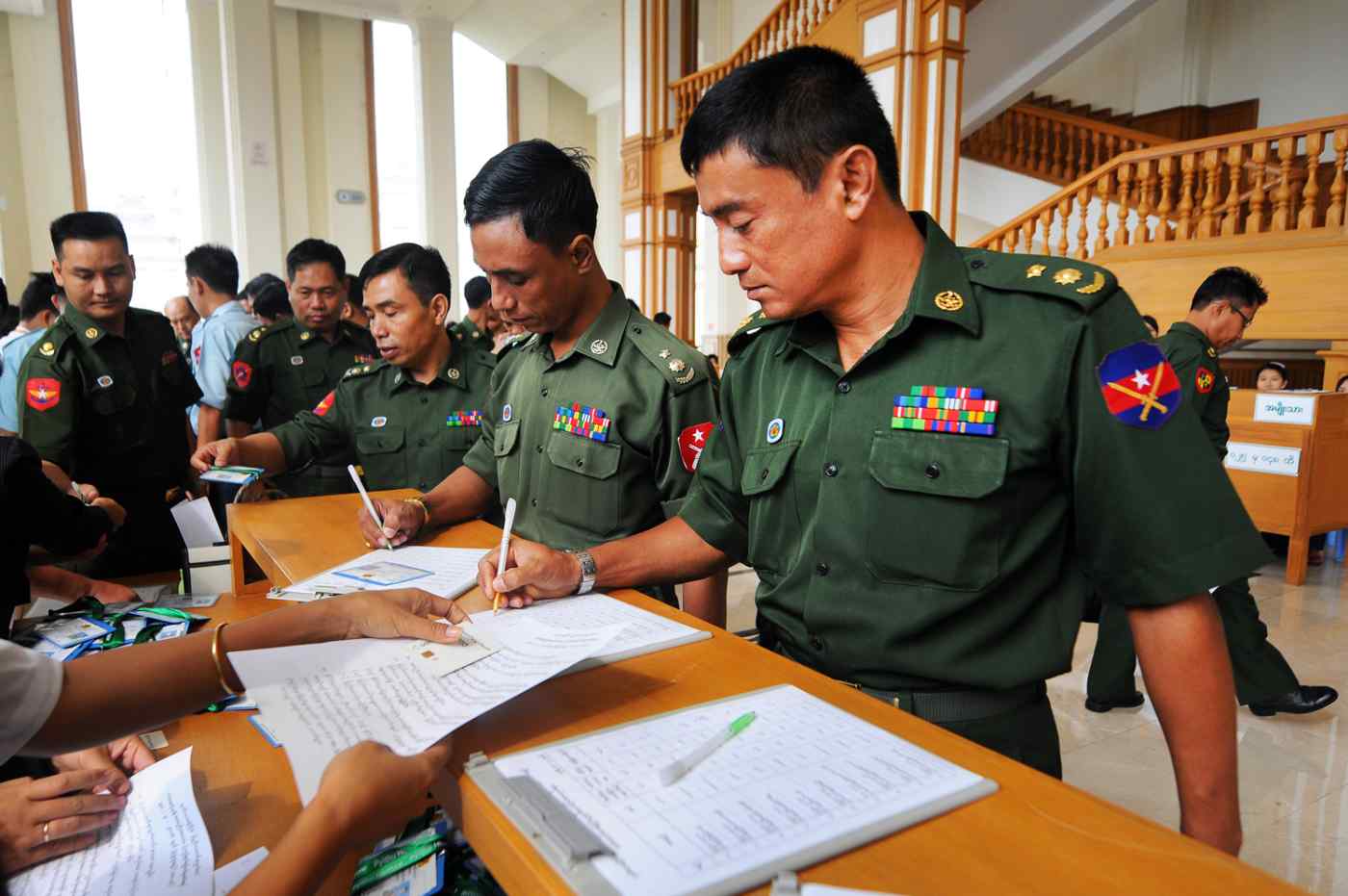 Military officers sign into the upper parliament for the swearing in of the new NLD-led government in Naypyidaw on March 30. (Photo by Steve Tickner)
June 5, 2016 02:00 JST | ASEAN
CopyCopied

When the National League for Democracy took control of Myanmar's national parliament after its electoral triumph last November, a fundamental rebalancing of Myanmar's legislative landscape was expected. Most observers thought that the military representatives, who hold an allocation of 25% of all parliamentary seats, would serve as the main opposition to the NLD, which controls about 58% of the Union parliament, as the bicameral legislature is known.

In a sense, military delegates do indeed form the chief opposition to the new ruling party. But they are also playing another role. Directly appointed by the commander-in-chief, the 166 military lawmakers in the Union parliament represent a solid, cohesive bloc, with significant legislative experience. About two thirds, or 107 serving officers currently sitting in the assembly, are in fact re-appointees who were already members of the previous legislature (2011-16). That includes 17 officers in the lower house, or Pyithu Hluttaw, and 11 in the upper house, or Amyotha Hluttaw, who have been sitting continuously for the past five years since their initial secondment in January 2011. Military appointed officers at the upper parliament for the swearing in of the new NLD-led government in Naypyidaw, on March 30. (Photo by Steve Tickner)

But in a departure from the previous legislature, the military legislators now include a substantial number of high-ranking officers, including three major generals -- two in the lower house, one in the upper house. In mid-May, Commander-in-Chief Min Aung Hlaing further upgraded the level of military lawmakers, in a move announced by the government's Union Election Commission. In addition to the 12 brigadier generals already seconded, three more one-star generals entered the house, replacing three lieutenant colonels.

Notwithstanding the recent consolidation of the military bloc, a series of bold moves by the NLD under its leader, State Counselor Aung San Suu Kyi, have highlighted a reality often overlooked. Despite their automatic seat allocation, military representatives cannot block ordinary legislation. While the military contingent holds a constitutional veto by virtue of the 75% "supermajority" required for any charter amendments, it does not hold a blanket legislative veto. All other bills only require a simple majority vote. In effect, with the majority gained from its resounding victory in the 2015 polls, the NLD can ram through legislation, as long as the new laws do not alter constitutional rule. Likewise, proposals drafted by military members of parliament can only be adopted with the NLD's approval.

So does this mean the military, or Tatmadaw, has been rendered powerless in parliament? The upgrading of the armed forces contingent in parliament with a greater number of senior officers is no coincidence. The Tatmadaw clearly wishes to make the views of the armed forces known in the legislative branch, while blocking any attempts to reform the constitutional order without its consent. Aung San Suu Kyi, for example, has vowed to amend a constitutional provision that blocks her - and any Burmese national whose family members hold foreign citizenship -- from assuming the presidency. The work carried out in parliamentary committees is particularly vital to the legislative process. This is where policy clauses are discussed, budgets pored over and amendments to extant laws debated. Already in the previous legislature, military lawmakers regularly served in the 40-odd committees set up by the two speakers. 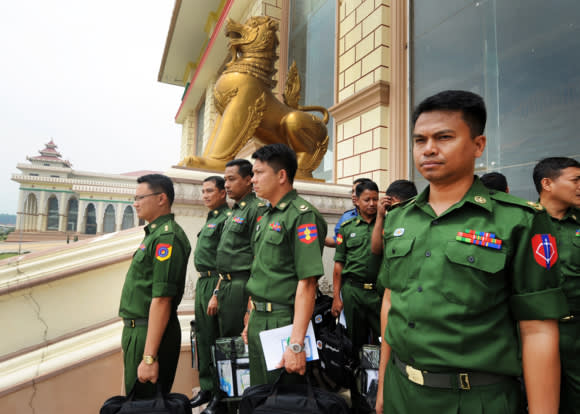 Lawmakers pause during a session of the upper parliament after the swearing in of the new NLD-led government in Naypyidaw on March 30. (Photo by Steve Tickner)

This is perhaps where delegates from the armed forces can have the most influence in the house. In committees, they like to show that they have both expertise and experience, and are committed representatives. Holding considerable authority, high-ranking officers can be imposing. A brigadier general may easily float ideas in closed-door committees and take on elected representatives who have little experience.

But in plenary sessions, military members of parliament generally appear quite constrained. The procedural rules of the Union parliament do not allow them -- or any other backbencher -- to easily get involved or disrupt parliamentary proceedings, as is common practice around the world. Disrupting the routine legislative process is not undemocratic; it is a performance symbolizing protest or opposition within a parliament where minority lawmakers are unable to pass legislation themselves.

Liberal democracies guarantee the opposition the right to delay the lawmaking process and block certain policy decisions. Minority MPs can obstruct debates through walkouts; or disrupt them though "filibustering" -- the deliberate dragging out of speeches to delay, if not cancel, a vote -- and the introduction of endless motions, amendments and questions. However, such parliamentary tactics serve to highlight the weaknesses of a minority group, rather than its strengths.

The Tatmadaw has already started to rely on theatrical maneuvers in parliament to signal disagreement with certain legislative business carried out by the new administration. Earlier this year, an NLD representative openly criticized alleged misconduct by local authorities involved in the Letpadaung copper mine project in the Sagaing region - a project with heavy military involvement. In response, the entire bloc of military appointees in the lower house stood up to protest silently.

The Tatmadaw repeated the stand-up protest later in April, when the state counsellor bill, which created and bestowed significant policy powers on the position - clearly designed for Suu Kyi -- was introduced by the NLD and subsequently passed. In an ironic twist, one brigadier general, a member of the joint bill committee, derided the swift passing of the law as "democratic bullying". This type of theatrical performance has no direct impact, but it bluntly shows that the most powerful institution of the country, the military, is unhappy with the legislative process.

In Myanmar's early post-independence legislatures, MPs from the opposition to prime ministers U Nu (1948-56) and Ba Swe (1956-57) frequently staged walkouts to protest the passing of a bill. Walkouts are another ceremonial performance practiced by minority parliamentary groups. But they are a futile gesture if the number of delegates leaving the chamber does not prevent parliament from achieving a quorum and continuing its deliberations. The procedural laws of Myanmar's parliament require that at least half the representatives be present to be quorate. 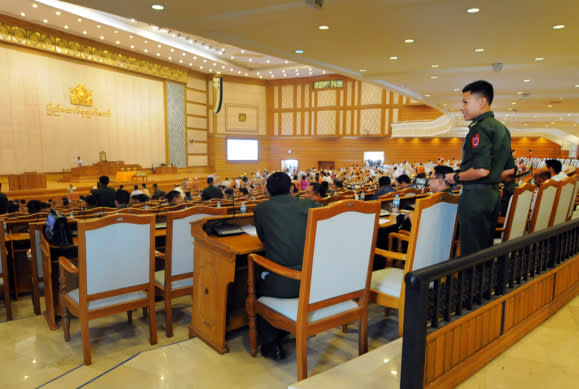 Military appointed officers leave the upper parliament after the swearing in of the new NLD-led government in Naypyidaw on March 30. (Photo by Steve Tickner)

The Tatmadaw may start using this tactic itself. However, as a minority bloc representing just 25% of votes, it would still have no impact on the draft bills it opposes, which can be easily passed by the NLD majority. Moreover, if the Tatmadaw chooses the theatrical path of parliamentary disruption, challenging the authority of the two speakers with more standing protests or even walkouts, the military institution would be seen to be using the same tactics it vehemently opposed among activist parliamentary groups in the past. Unremitting disruption by a quarter of parliamentary members would inevitably descend into political bickering -- a situation routinely observed before the 1962 coup d'etat and which has been lambasted by Tatmadaw ideologues ever since.

Internal regulations governing Myanmar's parliament also prohibit any form of disturbance in parliamentary premises. MPs are not supposed to exit the chambers without the approval of their respective presiding officers. These rules can be interpreted in several ways, leaving the speakers of both chambers with considerable powers. Furthermore, filibustering and other delaying tactics are not practical in Myanmar's current parliamentary arena, as the speakers can interrupt MPs, shorten discussions and order a prompt vote whenever they need to. The institutional mechanisms supporting minority parliamentarians remain therefore weak.

Other parliamentary instruments can be employed by the military delegates to signal their opposition. But they would similarly have little effect on the initial stages of the lawmaking process. Military MPs can voice their disapproval by boycotting votes. They can petition the constitutional tribunal - a process that requires signatures of only 10% of all Union MPs -- to seek the elite panel's interpretation of a law. But a petition would neither delay the vote nor prevent a law from being enacted.

In this context it was revealing that the Tatmadaw chose not to mount a challenge to the State Counsellor Law passed earlier in April. The military MPs did not petition the Constitutional Tribunal and have since accepted the authority, and legality, of the position of state counsellor.

The armed forces therefore seem to be in an awkward position in a parliament now dominated by a political movement that once openly opposed them. While holding enough heft on constitutional matters, military MPs will probably remain weak backbenchers. Moreover, they cannot be expected to engage in a political alliance with other civilian lawmakers, such as those from the formerly powerful Union Solidarity and Development Party. In doing so, they would indeed become involved in the divisive and parochial "party politics" against which the Tatmadaw hierarchy has persistently argued since the early 1990s.

The main challenge the Tatmadaw poses to the political power center, therefore, lies outside of parliament. The military as an institution has fingers in a great many pies across the country. If it is frequently and abruptly checkmated in the legislature, where legislation against its own interests can be passed according to the whims of the NLD, then the armed forces could well prove less cooperative in all other areas where a meaningful dialogue and the restoration of trust is needed to push forward the ongoing transition from military to civilian rule.

Among them is the peace process between government and ethnic armed groups aimed at terminating decades of civil war. Other areas of military influence include reform of the state bureaucracy, which still falls under military control, and the liberalization of an economy that is burdened with opaque, far-flung networks of conglomerates owned by the Tatmadaw. Overall, there are too many arenas where the collaboration of the armed forces is required for the NLD to risk jeopardizing the confidence-building process initiated in 2011.

At the same time, it is only by narrowing the Tatmadaw's sphere of influence and contesting the power it has grabbed over a wide range of issues that democratization will advance in Myanmar. The best public space for this to proceed is in the Union legislature.

Renaud Egreteau is a 2015-2016 fellow at the Woodrow Wilson International Center for Scholars in Washington D.C. These are solely his personal views.