Thai elite must bridge the political divide while it still can 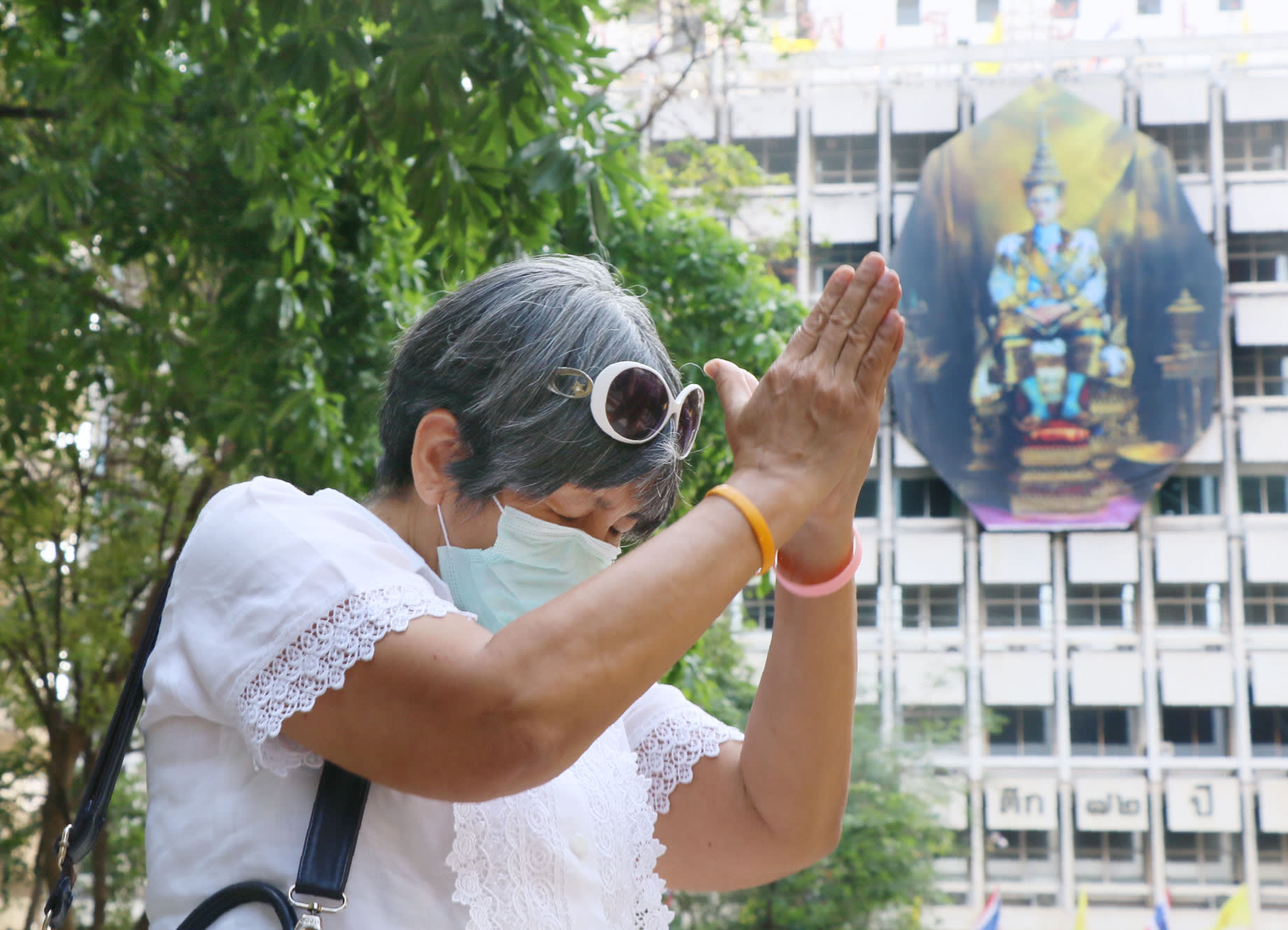 A woman prays for Thailand's monarch, King Bhumibol Adulyadej, who is in a fragile condition in Siriraj Hospital in Bangkok. The building is decorated with his portrait. （Photo by Shinya Sawai）
February 25, 2016 10:30 JST | ASEAN
CopyCopied

As the twilight deepens on the almost 70-year reign of Thailand's King Bhumibol Adulyadej amid reports of his deteriorating health, the contradictions inherent in this modern, middle-class country ruled by a traditionalist elite are becoming increasingly difficult to reconcile.

King Bhumibol, who is 88 and has lived for most of the last seven years in a Bangkok hospital, was reported in mid-February to have an unidentified virus. The media were full of daily reports on his condition as the palace took the unprecedented step of inviting the public into its ceremonial hall to sign a book for well-wishers. One week later, palace statements said the monarch was recovering. But it is clear his health remains in decline.

Despite the political gyrations of the past 80 years -- 19 coup attempts, long periods of martial law, 19 constitutions -- Thailand has been a sheet anchor of stability in an otherwise turbulent region. The disputes were occasionally bloody, but tended to be tightly focused in Bangkok; although the shock waves often spread out across the country, the unrest had little material effect on ordinary people or investors outside the epicenter.

That dispensation has broken down over the past 10 years. The recurrent cycle of demonstrations and coups -- actual and judicial -- against popularly elected governments has created the conditions for the sort of class warfare that could suck the nation and the economy even deeper into the mire.

For years, the king was the bridge that spanned the divisions that emerged. He has not personally intervened in recent disputes beyond giving formal approval to successive governments as they were thrown up by elections or coups, but that has not stopped a variety of players, mostly notably the military, from invoking his name to justify their policies.

The lion's share of the king's power comes from the genuine love and respect that he has earned from Thais of all stripes after a lifetime of service. In the current Thai context, the king and the monarchy are not interchangeable: the man is much more powerful than the institution, and such power is not heritable. Without him, there will be a vacuum at the heart of a deeply unstable social and political system.

The army took power in May 2014, ostensibly to restore law and order after months of protests. But as the self-appointed defenders of the monarchy, they have an over-riding interest in ensuring that the succession is to their liking, if necessary through the use of force. The generals clearly believe that when it comes to power, possession is nine-tenths of the argument. By remaining in office they hope to be able to dictate the pace and direction of change, but they may be disappointed.

The opposition, cowed but not defeated by the draconian emergency powers the generals have granted themselves, knows it cannot take on the palace, the army and the bureaucracy while that triumvirate can invoke the moral and personal authority of King Bhumibol. Without his mystique, the elite's forceful defense of a status quo that has repeatedly disenfranchised large swathes of the population risks appearing as naked self-interest.

King Bhumibol's reign has seen Thailand become a middle-income nation, with all the implied middle class aspirations for progress. The government's attempts to force the country to retreat into a sclerotic theme-park version of Thai tradition looks quixotic and baffles those whom it does not anger.

The king's death will be followed by a substantial period of mourning, but political tensions will continue to seethe under the surface. How the generals and the bureaucracy handle the inevitable challenges to their power will determine whether Thailand's post-Bhumibol social contract will be settled by confrontation or negotiation.

One of the problems the conservative bastions of traditional authority face is that if the spirit of a nation is embodied in a particular person, his or her death almost inevitably triggers a damaging identity crisis. For the Thai military, which is among various institutions to have fetishized the concept of "Thainess," such an identity crisis could easily look like an existential crisis, inviting an overreaction to criticism that risks ripping the fabric of Thai society in ways that would take years to repair.

Even if the domestic political opposition remains silent, other constituencies are expressing their unhappiness. Businessmen are disappointed by the government's dismal economic performance; the Democrat Party, whose name is not intentionally ironic, objected to the shackles that the generals' first attempt at a constitution would have imposed on democracy; the government's trigger-happy use of the lese majeste law, which mandates long sentences for insulting the king or senior members of the royal family, looks like insecurity in the face of challenge. An administration that prosecutes a man for posting unspecified derogatory comments about the king's dog on Facebook invites ridicule rather than respect.

However, although the rank and file is maintaining a low profile, the opposition is starting to make itself felt. Thaksin Shinawatra, the telecoms billionaire and deposed prime minister who lives in exile to avoid corruption charges, recently re-emerged from months of self-imposed silence to compare the Thai government to North Korea; in a recent interview with in the Financial Times he called the latest constitutional draft "crazy."

The Shinawatra family is also finding more inventive ways of getting under the skin of the generals.  Former Prime Minister Yingluck Shinawatra, Thaksin's younger sister who, like him, was forced from office, recently made headlines when she held an open day for the media in her garden. Separately, a recent dispute over whether an abbot who is associated with an order seen as close to Thaksin should become the leader of the Sangha, the ruling council of Buddhism in Thailand,  sparked a rare confrontation between monks and soldiers that led to the publication of pictures of an infuriated monk holding a soldier in a headlock. This was a particularly disturbing image for subscribers to Thailand's unofficial motto, "Nation, Religion and Monarchy."

The passing of King Bhumibol will be deeply upsetting for the millions of ordinary Thais whose hearts he won through decades of hard work and devotion. But they have already outgrown the political and economic paternalism that directed the early stages of Thailand's economic development. It delivered astonishing growth as Thailand reaped the dividends of industrialization, but the economy has now stagnated. For Thailand to continue to grow socially and economically, the elite needs to relinquish its hold on power and trust ordinary Thais to play an equal role in determining their future as a shared enterprise.