Willem Buiter: Toward the brave new world of negative rates and a cashless society

Five central banks have introduced negative policy interest rates since mid-2014 -- the European Central Bank, followed by the central banks of Denmark, Switzerland, Sweden and, on Jan. 29, Japan. The reason for the strong reactions of the public and some politicians to what is really a conventional monetary policy action was our unfamiliarity with negative nominal interest rates.

Historically, anticipated real (inflation-corrected) interest rates have been 2% or higher in most of the world, and inflation rates since World War II have seldom fallen below 2%. Japan was the first country in my lifetime to experience persistent deflation. The financial crisis of 2008-2009 and the global recession that followed it lowered equilibrium real interest rates into negative territory and drove inflation well below the 2% target set by many central banks. To stimulate the economy, central banks cut rates as far as they could. They discovered that policy rates below zero were indeed possible.

How negative can interest rates go? Because of the existence of a safe store of value with a zero nominal interest rate, cash or currency, the cost of storing, insuring and keeping cash safe (referred to as the "carry cost" of currency) sets a limit on how negative the interest rate on deposits can be. This carry cost has a fixed cost dimension (buying a safe). It will also be lower the longer one expects the negative interest rate episode to last. It seems likely that, in Japan and the eurozone, there will be many more years of negative interest rates. For banks, the carry cost of currency is unlikely to be much higher than 0.5%. A deposit rate at the central bank lower than minus 0.50% would therefore cause the bank to substitute out of excess deposits (or reserves) with the central bank and into cash. The fact that Denmark, Sweden and Switzerland have had policy rates of minus 0.75% or lower is probably due to "moral suasion." The supervisors of the banks discretely twist the arms of the CEOs of the banks to induce them not to switch out of reserves into cash. For retail deposits (held by households and SMEs) the carry cost of cash is likely to a bit higher, perhaps 1.0%.

It may well be desirable in the future to remove the lower bound on interest rates completely. By achieving complete symmetry in the central banks' ability to set the policy rate at a positive or negative level, the central bank would be more likely to be able to achieve its macroeconomic objectives of high employment and low, stable inflation. The easiest way to eliminate the lower bound is to abolish cash and to move to electronic or digital money completely. This could be achieved gradually by first eliminating the largest-denomination notes, like the 1,000 Swiss Franc note and the 500 euro note. The largest remaining note denomination could be brought down gradually until only $1 and $5 notes are left, to allow those who cannot adjust to digital money (like debit cards, cash-on-a-chip cards or Apple Pay) to continue to make small retail transactions using cash. A bonus from the de facto abolition of cash (and the anonymity cash provides) is that this would severely inconvenience those engaged in criminal activity, like tax evasion, money laundering, terrorism financing and the drugs trade.

To compensate people and companies for the loss of cash, every legal resident age 12 or older and every legal entity could be given a free bank account with the central bank. Deposits in these accounts -- eCash -- would be legal tender and would pay the official policy rate, positive or negative. Each account would come with a debit card and a cash-on-a chip card. There would be no overdraft facility. These accounts could be operated on behalf of the central bank by existing banks and other financial institutions, post offices, etc. Unrestricted free wire transfers between accounts, or transfers using some new technology like the Blockchain to transfer ownership of eCash, could be part of the package.

Welcome to the brave new world of negative interest rates and the cashless society. 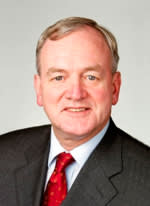 Willem Buiter is Chief Economist at Citigroup and former member of the Bank of England's Monetary Policy Committee.