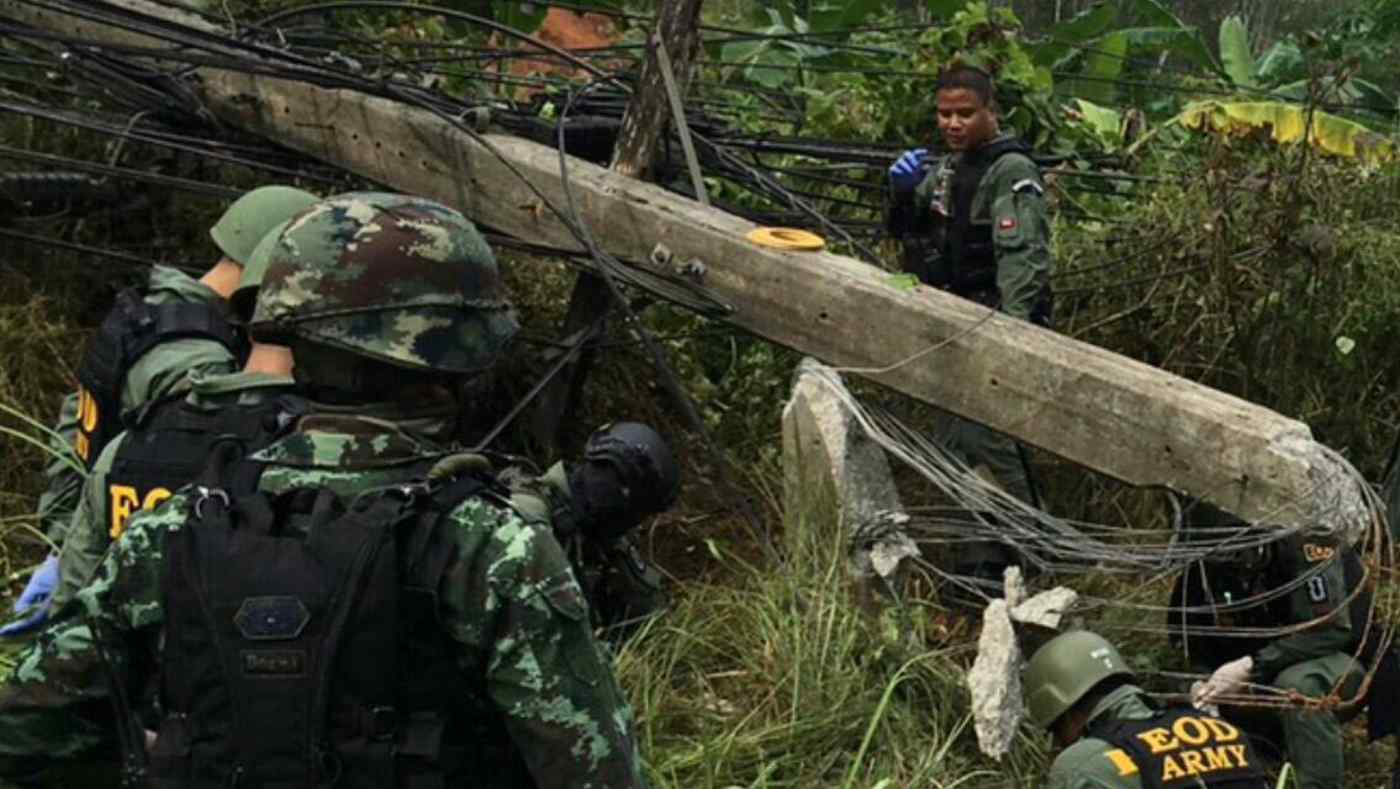 Thai security forces deal with the aftermath of an attack on electricity poles in Thepa district, Songkhla, that formed part of a wave of coordinated blasts across 19 districts in all four of Thailand's insurgency-affected southern provinces on the night of April 6-7 2017. (Courtesy of Anthony Davis)
CopyCopied

Fresh waves of insurgent mayhem have been roiling the border provinces of southern Thailand in recent weeks, refocusing national attention on the chronically troubled region and embarrassing the country's military-led government. But amid the explosions and gunfire of a bitter Malay-Muslim separatist revolt lies a paradox: The latest violence marks an important step on the road to peace.

Under the best of circumstances any settlement still remains a long way off. Fired by local anger over Bangkok's decades-long efforts to assimilate a once-independent Muslim sultanate into the national mainstream, the latest and most virulent campaign of resistance to central rule has cost nearly 7,000 lives since it began in early 2004. In retrospect, however, April 2017 may well be seen as marking a critical watershed.

With the military government focused on political stability in Bangkok in the potentially volatile run-up to elections promised next year, pressure for change in the south has been driven by the rebels. After 13 years of relentless violence, the region's dominant insurgent faction, the Barisan Revolusi Nasional or BRN, finally appears to be learning what for most such "revolutionary" movements is Strategy 101: how to use its military capabilities in a manner that advertises and promotes its political objectives.

In this case the political objective is talks with the Thai state, and since late March the display of military capabilities across the contested provinces of Pattani, Narathiwat, Yala and parts of Songkhla has been unusually pointed. Following a long lull imposed by months of torrential rains and flooding, violence re-erupted in late March and surged into mid-April. None of the tactics used was new, but the rapid-fire combination of different methods of rendering the region ungovernable was telling.

On March 30 the rebels staged a brazen drive-by assault on a police station in Narathiwat that left one officer dead and five wounded. That was followed on April 3 by a large-scale assault on a security force post in Yala. Estimated to have involved some 50 insurgents, it left 12 police wounded. Then on the night of April 6-7 came a blitz across 19 districts in all four insurgency-affected provinces which caused no casualties but targeted the electricity grid, using improvised explosive devices to bring down and damage over 50 high-voltage pylons.

Between April 8 and 17, ahead of and during the Thai New Year Songkran holiday -- a period when insurgent attack teams are usually busy -- a sudden silence descended on the border provinces. But on April 10, in an unspecified European capital, officials from BRN's "information department" led by spokesman Abdulkarim Khalid issued a rare communique backed by an equally rare media interview with the BBC. In its first public statement since October 2015, BRN laid out its terms for peace talks, including the need for an "impartial" mediator and international observers.

Predictably in the light of Bangkok's long-standing insistence that the southern conflict is a purely domestic issue, these conditions were promptly dismissed by Thailand's irascible Prime Minister Prayuth Chan-ocha. The junta chief added that Thailand intended to push ahead with talks with an umbrella group of several exiled separatist factions called MARA Patani. Brought together by Malaysia, the "facilitator" in the current process, MARA Patani is keen to talk and promote the establishment of violence-free "safety zones," but is not known to control any forces in southern Thailand.

On April 19 BRN's military wing swung back on the offensive with another coordinated region-wide operation involving grenade attacks on security force posts across three provinces, Songkhla, Pattani and Narathiwat. Coordinated operations across multiple districts and occasionally provinces have been regular fare for BRN's military network since 2005 when the insurgency escalated sharply. Requiring long-term planning and the simultaneous mobilization of numerous attack teams and support personnel, such waves of attacks have normally been separated by many months. The gap of less than two weeks between the region-wide operations on April 7 and 19 marked a first in 13 years of conflict.

Senior Thai military and government officials offered various public explanations for the upsurge in violence, ranging from the credible to the ludicrous. At the former end of the spectrum Defense Minister General (rtd.) Prawit Wongsuwan suggested that after reported changes in BRN's secretive top leadership, a new man in charge was eager to establish his hard-line credentials.

Middle ground was occupied by southern region commander Lt. General Piyawat Narkwanit, who argued that the rebels were rattled by several recent surrenders that he had personally arranged, and needed to stage displays of strength to prevent their ranks unraveling. This explanation sat awkwardly with repeated official assertions that the attack waves were conducted by newly inducted younger fighters, implying that rebel recruitment is actually in full swing.

More outlandish were comments from General (rtd.) Aksara Kerdphol, head of Thailand's negotiation team in talks with the MARA Patani, who recently cautioned in a media interview against concluding that the attacks involved insurgents at all, as the region was prone to violent local political infighting -- an optimistic rationalization of events once popular in official circles but which arguably passed its use-by date around a decade ago.

Official bewilderment aside, any dispassionate analysis of recent events can hardly overlook two factors. First, the attacks were evidently well-planned and coordinated and closely bracketed in what for BRN was an important political initiative.

Second, they underscored bluntly the answer to a question debated since the conflict began in 2004. Does anyone exercise control over insurgent groups scattered across 37 districts in four provinces? And if so, who?

By flicking its military switch on, then off and then back on again within less than two weeks, even as it issued its call for negotiations, BRN appeared to be providing a pointed and convincing demonstration of command-and-control over insurgent forces dispersed over a wide area. The small print in the message was that MARA Patani -- which was not even mentioned in the BRN communique -- does not exercise such control and certainly does not speak for BRN.

None of this will have come as any surprise to the upper echelons of Thailand's military or intelligence agencies. For Bangkok, penetrating the inner workings of BRN's intensely secretive leadership has always been a frustrating guessing game. But to a greater or lesser extent security professionals focused on the south have been aware for years that the insurgency is planned and driven by the men in BRN's Dewan Pimpinan Parti, or executive council. At the same time they have been quite happy to exploit the ambiguity that BRN's own fixation with secrecy and anonymity has created and so avoid the need for substantive talks.

The gradual emerging of BRN from a cocoon of clandestinity and a palpable shift toward exploring political options is fundamentally changing the old calculus, however. The issuing of a political statement from Europe coupled with a simultaneous display of military command-and-control in Thailand suggests the conflict may be entering clearer terrain marked by two salient, though daunting, features.

First, unless it intends to allow the conflict to drag on indefinitely, the Thai government will sooner or later have to recognize the need to talk with BRN, almost certainly with foreigners in the room. It will also need to assure BRN that the process is on a "national agenda" basis and not hostage to revolving-door administrations, military or civilian, in Bangkok. For its part BRN will need to acknowledge that the war-cry of "Patani merdeka" or "Free Patani" must mean a freedom that respects Thailand's sovereignty and the voices of other stakeholders in the region. More immediately, a faceless insurgent movement which has prided itself on a cult of secrecy will need to confront the very different demands of a negotiating process.

Against this backdrop, the troubled current peace process to which Bangkok has just reaffirmed its commitment can play an important if unintended role. At one level, the glacially slow pace of the process provides time needed by both Bangkok and BRN to adjust to new and difficult realities. At another, the MARA process also provides a face-saving screen behind which the two central belligerents could open a separate track of secret talks, mediated by international third parties trusted by both and entirely insulated from the pressures of media publicity.

Any such meetings would not mark the end of the conflict. But in providing an opportunity for the government and BRN to establish a modicum of trust and explore each other's willingness to compromise, they might just mark the beginning of the end.

Anthony Davis is a Thailand-based security analyst and writer for the defense publisher, Jane's.