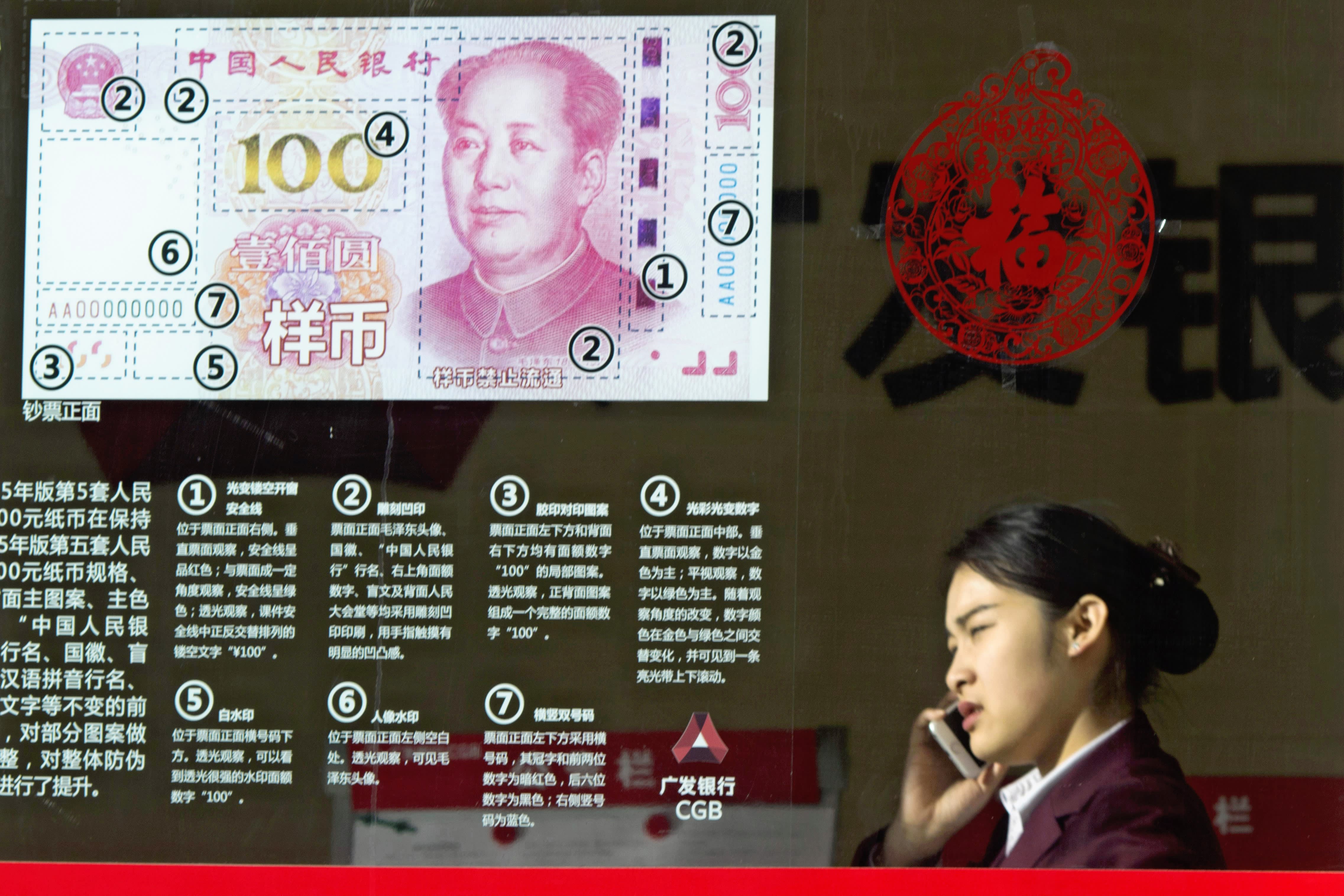 A woman speaks on her phone near a display highlighting the new Chinese bank notes at a bank in Beijing.
April 27, 2016 19:00 JST | China
CopyCopied

The Bank of Japan's interest rate setting meeting on April 28 is the focus of attention this week for many central bank watchers. For the rest of us, it is of fleeting significance: There is as much likelihood of monetary policy sparking a revival of Japanese demand and inflation as there is of it influencing the weather.

Structural reforms, including those aimed at corporate governance and the extraordinary cash pile sitting on company balance sheets, were, and remain, the only credible way in which these matters can be addressed. Such reforms would, moreover, afford Japan the opportunity to start bringing down the outsized ratio of government debt to gross domestic product.

Unfortunately, as time moves on, debt is becoming increasingly an Asian phenomenon, notably in China, but elsewhere too. For non-Japan Asia, though, the problem is not so much sovereign or government debt as private debt, especially on the balance sheets of nonfinancial companies.

In some Asian countries, such as India, the Philippines and Indonesia, private nonfinancial debt has risen in the last five years, but the orders of magnitude are still quite contained at around 50% to 60% of GDP. In more indebted economies ratios have also been rising since the financial crisis in 2007-08 and now stand at now stand 100% to 170%. This group include Vietnam, Japan, Thailand, Taiwan, Malaysia and Singapore. Thailand and Malaysia have been here before, and at significantly higher levels, prior to the Asian crisis in the late 1990s, but the trend in recent years has been marked by persistent increases. Above the group are South Korea and China, with ratios of between 200% and 220%.

We rightly draw distinctions between development levels and economic sophistication in relation to the problems of managing high or rising levels of debt. South Korea, Taiwan and Singapore, for example, cannot be compared simply with Vietnam or Thailand. But it is worth noting the regional trend. In fact, the International Monetary Fund's 2015 Asia-Pacific regional report did so, remarking on the rising credit intensity of GDP in Asia (the growing use of credit to sustain GDP growth); the rising ratio of debt to equity among Asian companies; and the rising burden of debt servicing. Up to that point in late 2014 or early 2015, the IMF was able to take some comfort from sustained income growth and supportive financial conditions.

In the last year, though, slowing economic growth, periodic crises over capital outflows and a stronger dollar have undermined both debt sustainability and overall financial conditions. Even though the early 2016 intensity of capital outflows and dollar appreciation has waned in the wake of the U.S. Federal Reserve's latest shift towards 'softness,' we should not be complacent that this will be permanent.

True, no change in U.S. monetary policy was expected at the Federal Open market Committee's meeting on April 26 and 27, and none is forecast at the next meeting in June. Yet if the U.S. economy starts to look a little stronger after a very weak first quarter (and a start to the second quarter that looks barely better), financial market expectations about U.S. interest rates and the dollar may turn again: Employment gains look likely to remain robust; the labor force participation rate has been rising for six months; and important measures of prices are inching up slowly.

China worse than it looks?

The time may be fortuitous for interest rates to come down in Asia -- a phenomenon that seems more likely as economic growth slows. In South Korea, for example, growth in the first quarter fell to just 0.4% over the prior quarter, with private domestic demand especially lackluster. But lower interest rates will not resolve debt sustainability problems caused by credit that is growing too fast relative to GDP.

Sooner or later, public policy has to embrace measures that curb credit expansion and substitute more durable and less harmful ways of sustaining stronger economic growth, including the use of some of the fiscal space that many governments have, and the application of institutional and redistributional reforms. These include policies designed to boost educational attainment, raise labor force participation -- especially for women -- improve infrastructure, and reform the governance regime that holds sway over labor, product and credit markets.

Nowhere is this truer, important or pressing than in China. The regular diet of research and commentary has highlighted China's relentless increase in nonfinancial corporate and local government debt. By most benchmarks, this is now considerably over 200% of GDP, or double what it was at the start of the Western financial crisis.

Less well known is that the surge in credit creation has taken on a new lease of life since the spring of 2015, in the wake of new instruments and loan structures that are not included in the familiar monthly release of what China calls "total social financing." These are predominantly loans raised by local governments in the form of bond issues and by nonbank financial institutions such as asset and security companies. The former were introduced to enable local governments to swap expensive bank debt for bonds, but as things have turned out those bank loans remain on the balance sheets of the lending banks.

The effect of considering a broader and more representative measure of credit growth in China is to raise the debt to GDP ratio, excluding the central government, to around 270%, with every prospect that it will pass 300% in the next two to three years. It also sheds light on the growth in credit, which is currently running nearer four times the rate of increase in nominal GDP than the two times suggested by the total social financing indicator.

Economically, this has had the effect of stabilizing the Chinese real estate sector and economy for the time being -- and probably for a few months yet -- but it is patently a short cut to economic stabilization that will lead to a much bigger economic headache in due course.

Politically, the authorities are paying passive attention to debt creation, at best, and while Beijing ought soon to put the debt canary back in its cage, this does not seem likely -- at least until after the 19th Communist Party congress in 2017, when President Xi Jinping will want his people to fill vacancies that will arise in the Politburo Standing Committee and the Politburo.

The acid test as to whether, or how, China's mounting debt problems are resolved -- with implications for China and the rest of Asia -- will then occur, if not before.