Donald Trump last week became the first U.S. president since the Vietnam War to have visited Vietnam during his first year of office, spending three days in the country during his inaugural Asian tour.

His much-anticipated visit followed a trip to Washington in May by Vietnamese Premier Nguyen Xuan Phuc -- the first Southeast Asian leader to call on the new U.S. president in the White House.

The friendly exchanges made it clear that when it comes to the crunch, even Trump's radical approach to trade will not undermine the two countries growing efforts to cooperate in the face of China's seemingly relentless rise. Nor will "America First" be allowed to eclipse the hard efforts made in recent years to overcome the painful legacy of the Vietnam War and deepen defense and security cooperation. While Trump has broken with his predecessor on many issues, he looks set to stick to Barack Obama's earlier approach on strategic ties with Hanoi.

But, the Vietnamese leadership will not allow the special relationship with Washington to destabilize the country's delicate ties with Beijing. While it remains wary of Chinese military expansionism, especially in the South China Sea, Hanoi wants to preserve a balanced relationship with China. Shortly after Trump's departure, Vietnamese leaders welcomed Chinese President Xi Jinping with a 21-gun salute on his first official visit to Vietnam after his success at the Chinese Communist Party's recent 19th Congress. 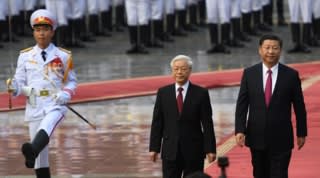 On a mission to mend strained ties, Xi met with Vietnamese Communist Party leaders and signed 19 cooperation agreements. A symbol of mutual goodwill was the opening of a Vietnam-China Friendship Center.

Building the U.S.-Vietnamese relationship four decades after the end of the war has taken hard efforts -- and the spur of China's increasing assertiveness. Defense and security cooperation has emerged only in the last few years, helped by Obama's "pivot" toward Asia that paid special attention to Southeast Asia. Vietnam was one of only three Southeast Asian countries that has seen an increase in U.S. defense assistance, albeit from low levels.

The improvement in relations has led to increased bilateral trade, which has grown 100-fold from $451 million in 1995 after the U.S. trade embargo was lifted to $45 billion in 2016.

But both sides have been treading carefully. Hanoi has been constantly wary of the Chinese reaction to the easing of ties between the former enemies, while legacy issues stemming from the Vietnam War and political differences reflecting U.S. insistence on democratic values and human rights also influenced relations.

Trump's presidency, however, has created a new challenge by focusing attention on the trade imbalance. As his officials have pointed out, the mushrooming of bilateral trade has been unequal: as Vietnam's exports to the U.S. have grown to $32 billion in 2016 so has its trade surplus, which is now America's sixth on the list of countries with largest trade deficit.

Trump's decision to withdraw from the Trans-Pacific Partnership agreement has fueled at least as much anxiety in Vietnam as in other Asian exporting countries.

The U.S president's speeches on his Asia visit have proved to be completely consistent with his campaign promise of putting American interests first. He repeated this message at every stop of his tour and made the point again in Danang, Vietnam, in the multilateral setting of the Asia Pacific Economic Cooperation summit.

For the Vietnamese, addressing complaints about the trade imbalance can be easier to achieve than long-standing American concerns regarding its human rights record. The Vietnamese prime minister made some early economic concessions in his Washington visit in May, announcing $8 billion in orders for U.S. products to reduce the trade deficit. During Trump's visit to Hanoi, following his stop-off in Danang, new orders totaling $12 billion were placed for additional products and services, including airplane engines. Hanoi hopes that these multibillion-dollar deals will put Vietnam in Trump's good books and lay the ground for a new stage in relations.

Aside from trade, Vietnam heard a reassuring message from Trump, who called for respect for the rule of law, freedom of navigation, open shipping lanes and over flights. It all appeared to add up to a firm message to Beijing to respect the rights of its neighbors, not least in the South China Sea. Trump put icing on the strategic cake by appealed to the patriotic sentiments of Vietnamese by mentioning the legendary resistance of the Trung sisters who rebelled against Imperial China in around 40 A.D. For Hanoi this was more than a historic note -- Vietnam and China fought a (brief) border war as recently as 1979.

During his Asian travels, Trump has urged every country to put its own interests first, and emphasized that each state should be "its own bright star, satellites to none" -- another clear reference to many Southeast Asian states' concerns about China. The U.S. president also called Vietnam "the heart of Indo-Pacific" in a phrase which could have been seen as a courtesy, but also hinted at his recognition of the strategic importance of Vietnam.

Trump's hosts responded warmly. "Nothing is beyond the reach for our two nations" said Vietnamese President Tran Dai Quang at the state dinner on Nov. 11 in welcoming Trump in Hanoi.

While Trump focused on trade in his joint press conference in Hanoi, defense cooperation was detailed in the joint statement, in which the leaders affirmed a 2018-2020 Plan of Action for U.S.-Vietnam Defense Cooperation that implements earlier accords from 2011 and 2015. Plans were announced for the visit of a U.S. aircraft carrier to Vietnam in 2018, the first such call since the war. The momentum of U.S.-Vietnam security cooperation is likely to remain uninterrupted.

With Hanoi balancing this visit with the welcome given to Xi, Vietnam can be satisfied with the results. It has attracted positive attention from Trump's America while securing friendly gestures from China. Meanwhile, regional cooperation in Association of Southeast Asian Nations continues to grow, as do successful Vietnamese partnerships with Australia, Canada and New Zealand. While many challenges lie ahead, these developments should reduce Hanoi's fears of strategic isolation.