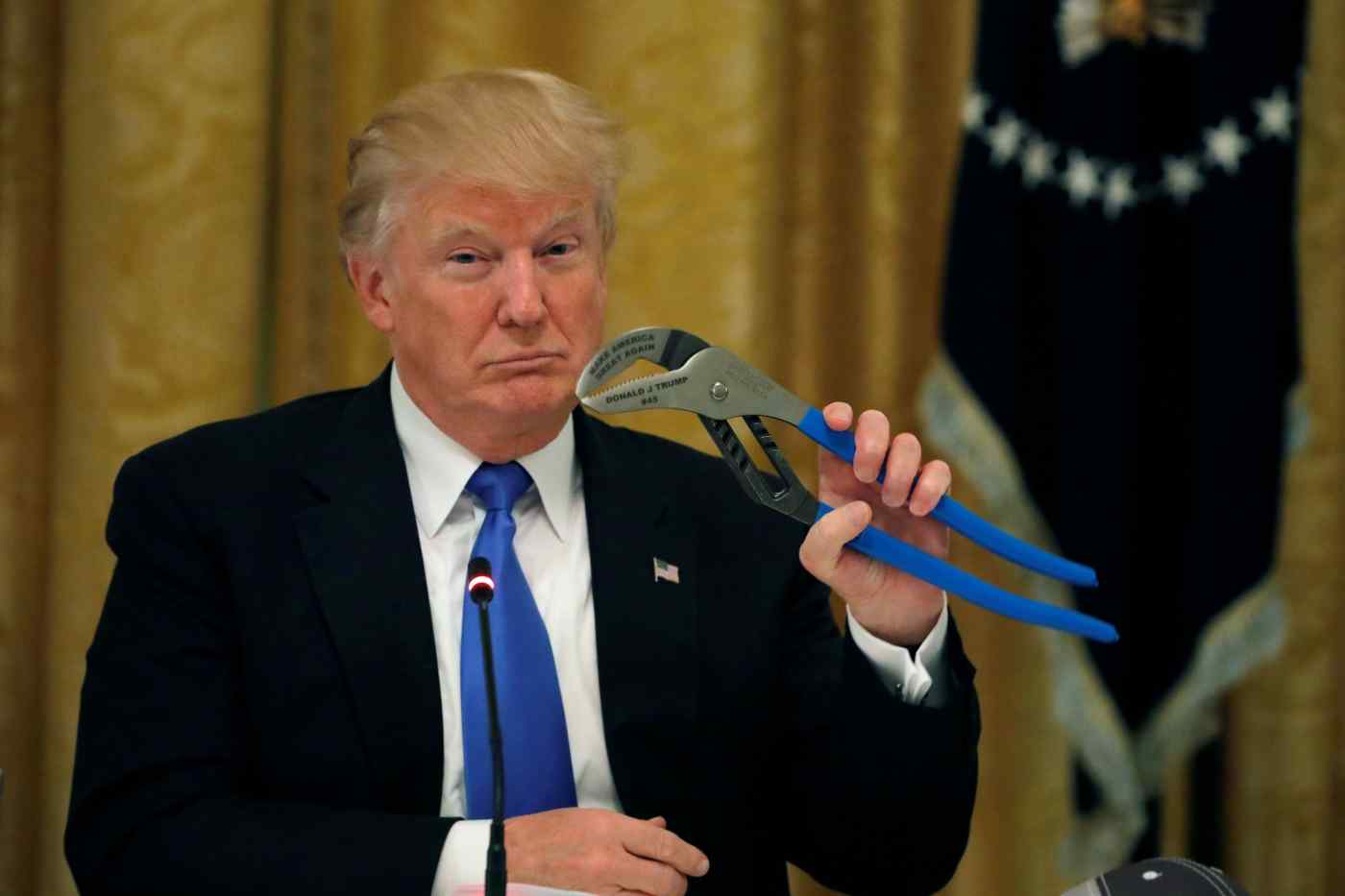 U.S. President Donald Trump holds a mechanical tool at a Made in America roundtable at the White House in July.   © Reuters
CopyCopied

When the administration of U.S. President Donald Trump issued its National Security Strategy in December, the word "trade" was mentioned 45 times and "competition/competitors" 58 times -- making both themes among the top five issues raised in this declaration of U.S. foreign policy intentions. It reflected Trump's commitment to trade policy activism that was a signature theme of his presidential campaign and has been central to his professed political agenda since the 1980s.

Trump's repudiation of the Trans-Pacific Partnership trade pact days after he took office in early 2017 was a powerful rejection of traditional U.S. leadership on trade liberalization and a rules-based order. It left a void in the Asia-Pacific region which Japan, Australia, New Zealand and others are now seeking to fill with the so-called TPP-11, the original signatories minus the U.S. As important as U.S. non-participation in TPP is to regional trade policy, the Trump approach to both global and other regional initiatives -- and its menu of unilateral options -- may be equally consequential.

What is the likely "next big thing" on the calendar of trade policy risks?

The North American Free Trade Agreement between the U.S., Canada and Mexico, three of Asia's largest trading partners, and the World Trade Organization are foundational to the global trade system. Any U.S. attempt to alter them constitutes an important systemic risk that markets may be underpricing. NAFTA repudiation would be bad for all three markets. A U.S. departure from WTO would seriously undermine the global trading system.

The Jan. 23 round of NAFTA talks in Montreal will not reach consensus on U.S. demands. This is likely to prompt Washington to trigger a six-month process to withdraw from the deal. Trump's opposition to NAFTA competed with his distaste for TPP during the campaign. US, Canadian, and Mexican negotiators have met five times, making progress on minor points rather than core issues.

If the U.S. triggers NAFTA withdrawal in January, U.S. Trade Representative Robert Lighthizer may believe that Canada and Mexico will finally get serious about accepting U.S. demands. Such action is likely to backfire. Not only are Canada and Mexico -- both facing elections in 2018 -- unlikely to capitulate, but initiating the withdrawal process would trigger a fight between the Trump administration and Congress over the legal authority to change NAFTA's implementing legislation, This may provide the first evidence to markets that Trump's "de-globalization" strategy is underway.

The possibility of a U.S. effort to "renegotiate" features of the WTO is more remote but potentially more damaging than NAFTA withdrawal. Trump previewed this theme with trade ministers from the Association of Southeast Asian Nations during his Asia trip. In Lighthizer's confirmation hearing, he urged discarding the WTO dispute resolution process, a key political safety valve that allows international adjudication to function. Watch for major U.S. WTO cases against China as possible opportunities for the U.S. to challenge the WTO process

Another early warning sign came with the collapse on Jan. 2 of the proposed $1.2 billion takeover of MoneyGram International, a payments provider, by China's Ant Financial, which is controlled by Chinese tycoon Jack Ma, suggests that national security concerns will also be increasingly used to assess Chinese participation in the U.S. economy through acquisitions of U.S. companies.

At the heart of this is the Committee on Foreign Investment in the United States, or CFIUS. Sweeping new authorities for the body to either impose or redefine investment restrictions are under consideration in pending legislation that is likely to be voted on in 2018.

Changes in CFIUS and greater scrutiny of Chinese access to the U.S. market is only half the picture. A related issue is a non-trade remedy statute that the administration could deploy to limit imports or take other punitive measures. The International Emergency Economic Powers Act (IEEPA) has been called a "nuclear option" on trade and economic policy. It has been used sparingly since its enactment in 1977, mostly as the basis for renewing lapses in critical laws. As no one knows the extent of presidential freedom of action under IEEPA, any resort to it creates undefined policy risks.

Beyond CFIUS and IEEPA, the Trump trade agenda has other weapons in its arsenal that can - and are likely to -- change market expectations and trade flows. These include:

'Section 301': Last August, the USTR launched an investigation using Section 301 of the Trade Act to probe Chinese intellectual property and industrial policy. The law enables the U.S. to apply sanctions to enforce trade agreements, resolve trade disputes, and open foreign markets to U.S. goods and services. An announcement about this particular case could come as early as January. Beijing may respond proportionately to any U.S. Section 301 actions, ignoring Trump's rhetoric. That reaction could include increased scrutiny and harassment of major U.S. companies in China.

Antidumping cases: Dumping cases require proof of underselling and injury to U.S. producers. The U.S. government initiated an anti-dumping case involving aluminum, the first such case in more than 30 years not brought by the private sector. With over $600 million in aluminum exports to the U.S., China is the main offender. If a Jan. 16 review is affirmative, it would allow the case to move to the Commerce Department for findings slated for February (on countervailing duties) and April (on antidumping). A final injury determination by the U.S. International Trade Comission would likely come 45 days after the final Commerce decision.

Other measures: There is also a case against China under Section 201 of the Trade Act on solar import restrictions. This provision, known as the "safeguard" statute, gives the president authority to grant temporary import relief, such as imposing nontariff measures or imposing duties on goods entering the U.S. that harm equivalent, domestically made goods. This case does not require a determination of unfair trade, but a higher level of injury to U.S. industry and presidential approval by mid-February.

Finally, there is Section 232, which is not a "normal" trade remedy statute, and focuses on the effects of imports on national security. A current case involving steel, aluminum and possibly high-tech products from China has a 270-day deadline from its April 20 inception, although actions could come sooner

No one in the U.S. questions the need for a more adaptive and interest-based approach to Chinese state capitalism. The risk in Trump's trade agenda is that it overreaches on punitive measures without the context of a confident American vision of trade growth and opportunity. Markets do not just react to trade contraction risks; they overreact. If U.S. trade policy goes into a defensive crouch without clarity about desired end-state goals, that failure of imagination could create fundamental political and economic headwinds in a year crowned by crucial American mid-term elections.