Why China has opened the way for more inbound M&A

Last year's record level of Chinese merger and acquisition activity will be tough to match in 2017. While conditions globally still look favorable for continued dealmaking, the so-called "Trump effect" is looming large for economies, corporations and private equity investors.

U.S. President Donald Trump's election campaign rhetoric threatened an aggressive protectionist strategy that could jeopardize trade with China, with the prospect of new tariffs on imports and the overt use of monetary policy to directly intervene in international currency markets. However, such threats may have been designed mostly to enhance Washington's negotiation position with respect to future trade deals.

The latest data shows a marked drop in Chinese outbound deals so far in 2017, with total transactions counted by Thomson Reuters running 40% below the same period last year. Much of this decline is down to Beijing's recent curbs on capital outflows. But while the brakes are being applied on outbound activity, inbound M&A has kicked off at a furious pace. Inbound transactions have almost doubled compared to the same period in 2016 and are projected to easily beat the 2016 total of $46 billion tallied by Thomson Reuters.

The pervasive feeling is that while Trump's every word is debated and dissected by all sides, businesses and markets have set off the year on an upward trend. With the global landscape of low inflation, sluggish but generally positive global gross domestic product growth and low interest rates, 2017 is set to see continued strong M&A activity while capital is still plentiful and asset prices remain attractive.

Inbound flows to China have been accelerated by Beijing's loosening of regulations to ease transactions and the continued reform of the domestic initial public offering process, giving companies greater access to mainland capital markets. Approval processes for inbound investment have been simplified and previously off-limit sectors are being opened up.

Key drivers fueling these reforms include the need to balance China's capital account following record overseas direct investment in 2016 and an attempt to soften the attitude of policymakers in overseas jurisdictions toward welcoming Chinese capital by showing more reciprocity.

On a macroeconomic level, the surge in inbound investment into China can be attributed to the continuing weakening of the yuan, the release of demand from the U.S. pent up in the run-up to the presidential election, more attractive valuations as long-term GDP growth adjusts to the "new normal" and the maturing of the Chinese economy to allow greater outside participation in control and buyout transactions.

Whatever the motivation behind these policy shifts, the result is clearly a move to level the playing field in accordance with World Trade Organization stipulations. This can only be good for foreign investors looking for deals in the year ahead. Certain sectors which were deemed off-limits in the past, such as health care, may well see further measures to provide for more favorable ownership structures for foreign investors.

As far as projected M&A activity is concerned, retail remains significant and consumer services will also be a target for foreign investors as the government continues to drive up domestic consumption. The technology, media and telecommunications sector is set for a major surge as upscaling and upgrading occur with the boom in online and mobile commerce. Added to this is the prospect of 5G infrastructure rollouts around smart cities and the internet of things.

Ongoing growth in high-tech manufacturing as the government pursues a transformation toward high-quality and high-value goods could be another driver of deals. Health care is a good bet as the challenge of an aging population hits modern Chinese families that now have the income but lack the time to care for the elderly. Expect to see the growth and upgrade of elderly care facilities as well as other services that aim to ease the burden on the strained hospital system.

The government clampdown on dubious outbound deals that lack a genuine business case is already having a clear effect. In the medium to long-term, the government measures will ensure a healthier M&A landscape in China, providing for quality transactions, greater transparency and the elimination of noncommercial arms-length deals that can distort real asset valuations. As such, the recent policy measures can be seen as a welcome development for Chinese investors who are looking to engage in genuine outbound transactions. 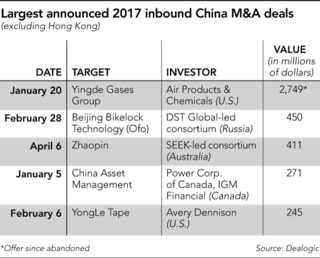 The Trump administration is expected to broaden the scope of scrutiny of the Committee on Foreign Investment in the United States, the interagency committee that provides recommendations to the president on foreign acquisitions and investment into U.S. companies. Investors can expect deals in sectors beyond the traditionally sensitive telecom, tech and defense areas to be reviewed for national security concerns.

Uncertainty regarding the U.S. is putting other regions into focus, with the U.K. and Germany seeing a recent spurt in interest from Chinese buyers. As the U.K. increasingly looks beyond the eurozone amid Brexit, Chinese investments have targeted consumer services such as travel and leisure, as well as the real estate and infrastructure sectors. Germany is witnessing a renewed level of interest in high-tech manufacturing as Chinese enterprises seek to acquire world-class intellectual property. Other parts of Europe are in active focus too, with luxury brands continuing to be popular.

In Asia, the bigger deals typically come into Singapore or Hong Kong around real estate and financial services, but a shift to other countries is likely with China's Belt and Road Initiative development framework. Countries along the Belt and Road corridor in South Asia, the Middle East and Eastern Europe are likely to become more prominent in Chinese investment plans.

Without question, there is uncertainty in the air with the shifting global political landscape, but for China any negative sentiment around Trump is more than tempered by the positive signals bounding from Beijing.

China is pushing very hard on two fronts: its Made in China 2025 industrial development strategy and its policy of "going out" into the world. The government mission to shift China from an export-driven, low-value goods economy to a high-value, high-tech, consumption-driven model will ensure that cross-border investment continues at pace and in both directions.

It is inconceivable that any major global economy, never mind one of China's size, could embark on such a transformation through internal investment alone. Chinese companies will seek to bring in technological expertise to upgrade their capabilities while also aggressively expanding overseas to build the country's brand. Foreign governments will continue to welcome Chinese capital as a means to stimulate growth in their domestic economies, although the current geopolitical climate may temporarily slow down inbound investments from China.

In light of this, Asian and Chinese private equity funds have a role to play beyond being aggregators of capital and a stand-alone asset class. Specifically, Chinese companies should leverage private equity's vast network and well-developed investment evaluation techniques by partnering with such firms in overseas acquisitions.

The stability of China's policy direction, its current five-year plan and its traditionally smooth leadership transition, set for later this year, should ensure that markets can operate with confidence. Trump may have introduced a few question marks and given some cause to pause, but so far roadblocks have yet to emerge. Until then, capital will continue to maintain a healthy flow in and out of China.

Paul Aversano is global practice leader of the transaction advisory group of Alvarez & Marsal. Xuong Liu is managing director with the group in Shanghai.