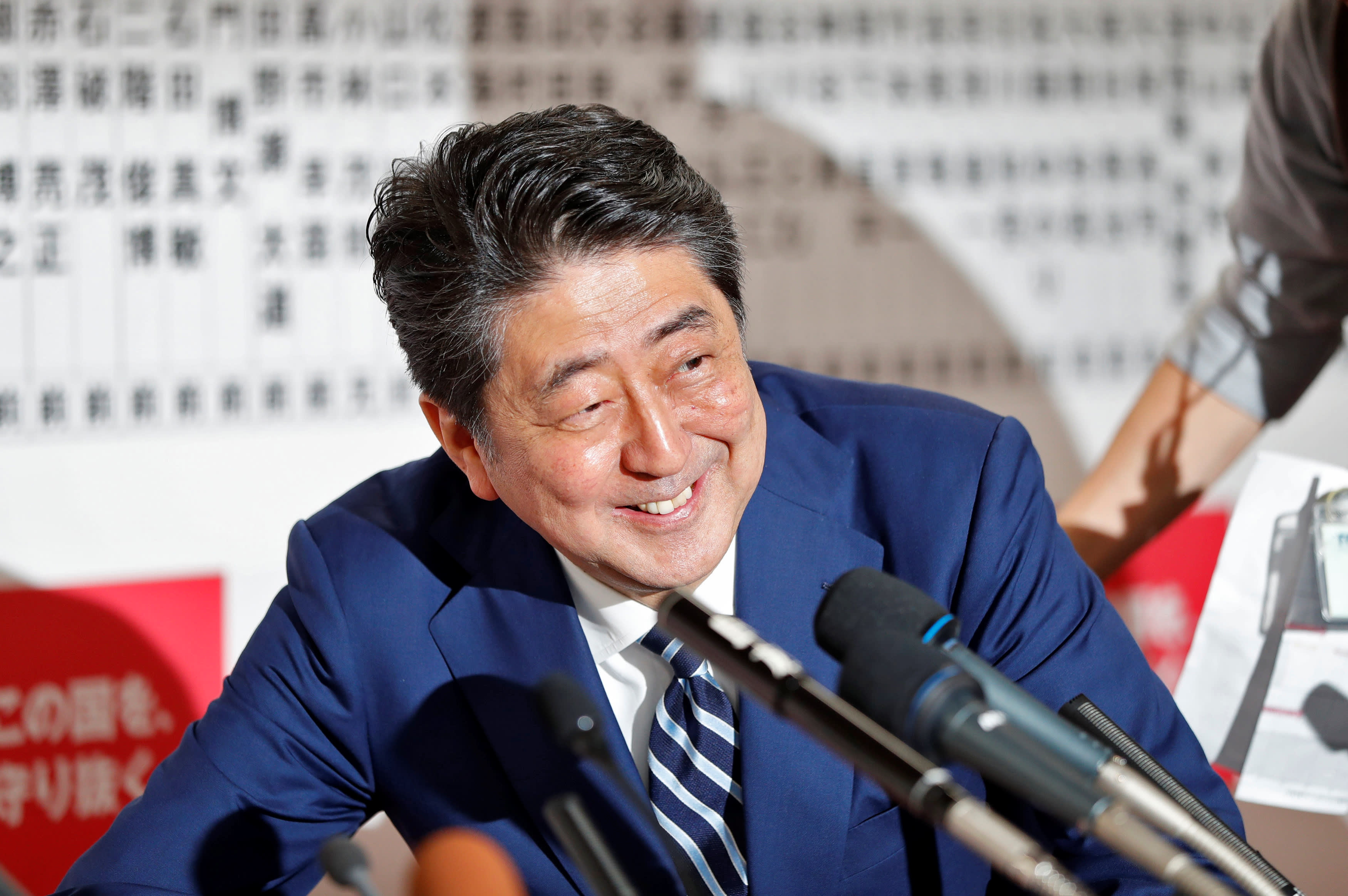 So it is five big wins in a row for Japanese Prime Minister Shinzo Abe. His impressive victory in Sunday's Lower House election follows two earlier lower house successes and two in votes to the parliamentary Upper House.

All this puts 63-year-old Abe in a strong position to secure another term as head of the ruling Liberal Democratic Party next autumn. If he continues in the job until 2021, as now seems probable, he will become Japan's longest serving prime minister since the dawn of the parliamentary system in the 1880s.

Crucially for investors, this means an extended lease of life for the "Abenomics" reflationary policy regime under which the Nikkei Stock Average has soared from an extraordinarily depressed level to a 22-year high.

It is not yet known whether Bank of Japan Gov. Haruhiko Kuroda, who has overseen an easy money program, is willing to serve another five year term himself. If not, it is highly probable that his successor will be a reflationist in the Kuroda mold. The nightmare scenario of a premature tightening of monetary and fiscal policy, bringing with it a resurgent yen and a return to deflation, is now far less likely than if Abe's decision to call an early election had backfired.

Next on the Abe agenda is the necessary but politically contentious reform of the pacifist constitution the U.S.-imposed on Japan after World War Two, which has been treated as holy writ for seven decades.

With the ruling coalition having retained its two thirds majority in the Lower House, the prime minister has the necessary parliamentary strength to push through a bill for constitutional reform. But winning a simple majority in a national referendum -- as is also required -- is a trickier proposition for a leader with limited personal charisma. To maximize his chances, he will need the kind of public support that comes with a powerful "feel good" factor at street level.

That has yet to happen. The Tokyo stock market is in maximum bullish mode and the central bank's tankan survey of business sentiment shows confidence at its highest level since the last hurrah of the bubble economy in 1992.

Yet consumers remain cautious. Indeed, the Economy Watchers Survey -- which incorporates the views of hair-dressers, taxi-drivers and pachinko parlor operators, amongst others -- peaked out just before the government hiked the consumption tax in 2014 and has gone nowhere since.

Fortunately for Abe there is every chance that, barring sudden squalls in the global economy, the next phase of his Abenomics project will deliver progressively better news to the household sector. The driver will be Japan's structural labor shortage which is likely to intensify over the next few years, leading to higher wages and, ultimately, rising inflation. The combination of strong nominal GDP growth and super-low interest rates should prove increasingly stimulatory. If Abe lets the economy run hot -- and that means keeping fiscal policy loose too -- there should be a mini-boom in 2020, just in time for the Olympics and the referendum on the constitution.

At first sight, such an outcome seems unlikely. After all, Japan is far from being alone in experiencing a long period of solid economic growth with quiescent inflation and little improvement in wages. Most of the developed world is in the same condition. Janet Yellen has described it as a conundrum and some economists have proclaimed the death of the Phillips Curve (which purports to establish a clear relationship between unemployment and inflation).

Yet just as 10 years ago few would have predicted the current configuration of forces, so observers may be underestimating the potential for new factors to come to bear. First, the deflationary pressures of globalization are easing -- Chinese unit labor costs in manufacturing are now practically on a par with Japan's. Second, low-paid workers and others who believe they have suffered from globalization are putting pressure on politicians in the US and western Europe for more active fiscal policies and, in some countries, income redistribution. Thirdly, with populations aging in the developed world, the pool of potential new entrants to labor markets is not infinite, especially if mass immigration is checked.

In Japan's case, that last point is vitally important. Job growth has been strong under Abe, but most of it has been in the overwhelmingly female part-time sector, with some contribution from retirees going back to work on lower pay. However, the "part-time ratio" (the percentage of part-timers in the workforce) appears to have peaked already. The job-offer-to-applicant ratio for full-time employees (a standard measure of labor market tightness) has exceeded one for the first time ever -- there are now more offers than applicants. Japan is running out of non-working women and keen-to-contribute senior citizens. If business conditions remain buoyant, wages must rise.

Conventionally, labor shortages and rising wages are a threat to corporate margins and, eventually, economic health. In the case of Japan, however, the opposite may be true. As labor becomes scarcer and more expensive, managements will need to use it more efficiently. Ultimately, this will mean more investment in automation and more corporate restructuring and mergers and acquisitions.

In other words some of the structural reforms -- such as a labor market overhaul -- that were supposed to be part of the "third arrow" of the Abenomics package will be put in place not by government fiat, but by organic economic processes. A quick glance at the structure of the Japanese banking system -- and indeed at the inside of any bank branch, with its ranks of paper-shufflers -- will demonstrate how much room for improvement exists. The performance of the construction sector, the first to suffer from severe labor shortages, demonstrates that, counter-intuitively, higher wages and higher margins can co-exist. Managements introduced innovative working methods and  information technology to what had previously been a highly traditional industry and the result has been impressive productivity gains.

A mandate for growth

What about fiscal policy? Abe fought the election on a platform that included a proposal to hike the consumption tax. Never a fiscal hawk himself, he may have felt pressured by his dip in popularity over the summer into offering something to the more hawkish factions in the LDP. Now that his political position is secure, he can row back as much as he likes. The anti-tax hike Party of Hope, founded by Tokyo Gov. Yuriko Koike, could provide the excuse. Abe needs Koike's support on constitutional reform and scrapping the tax hike would be a useful quid pro quo.

In Japan's pragmatism-driven political culture, doing the opposite of what you once advocated is rarely blameworthy and often seen as sensible. The conservative Abe is also proposing to offer free higher education, and even wants to make it a constitutional right. Fiscal largesse is a time-honored element of mainstream LDP strategy and nobody would be surprised were Abe to revive it. Indeed, he has already made the case for the issue of "education bonds" that would be self-financing by bringing forth higher future growth and thus tax revenues. Interestingly, the newly enfranchised 18- and 19-year old voters are the most pro-Abe age group of all, according to a Nikkei survey.

Some may worry about the risk of another bubble, but with the Nikkei Index no higher than it was in 1987 and real estate prices subdued in all except prime Tokyo areas that seems a premature concern A more pressing issue -- and one that worked to his benefit in the election -- is how to deal with the North Korean threat. In the short-term, liaising closely with the U.S. is the only solution. Over time, Japan will have to build up its own anti-missile capability, which will further challenge the post-war legacy of pacifism.

Does Abe have the stomach, quite literally, for another full-term in office? His first stint in power, in 2007, lasted just one year as health problems took their toll. A nine year term in office is a grueling prospect, especially given Abe's globe-trotting diplomatic schedule. Yet over the past five years, he has seemed to thrive on the challenges, making sure, for example, that he was the first foreign leader to meet with the victorious Donald Trump last November. Electoral success may be the elixir he needs.

In a world in which mainstream political parties are under the cosh -- with even the previously invulnerable Angela Merkel damaged by the success of the populist right wing Alternative for Germany -- Japan's political stability stands out like a beacon in a sea of fog. Abe's electoral success is the product of his generally effective pro-growth policies. Four more years of the same should confirm Japan's exit from deflation and return to the global stage as a major player.