Japanese Prime Minister Shinzo Abe began a campaign called "womenomics" in 2013 in a bid to empower women and boost the economy by increasing female participation in the labor force. Womenomics has been an integral part of Abe's policy package, dubbed Abenomics, and one of its three main goals is to push up the birthrate to 1.8 by providing 500,000 additional child care slots from 2016 to 2018.

Policymakers and experts believe a lack of subsidized child care is the main obstacle to getting more women into the labor market. The female labor force participation rate for those aged 15-64 was 66% in 2016, which is slightly higher than that in the U.S. However, the figure for women with children aged 0-2 was only 37% in 2010. This is much lower than the average among the countries in Organization for Economic Cooperation and Development, which is 54%.

Are more Japanese mothers working, as Abe hopes? In recent research done with Yukiko Asai at the University of Tokyo and Ryo Kambayashi at Hitotsubashi University, we examined evidence of the effects of child care reform in 2000-2010. 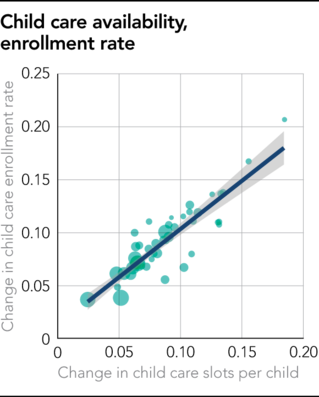 Our first step was to investigate if reform increased the rate of children enrolled in formal child care. Figure 1 shows the relationship between the growth of child care slots per child and that of the enrollment rate for children aged 0-5.

Each circle represents a prefecture, and its radius reflects the child population. The scatter plot shows a positive association between the two variables, which implies that an increase in child care slots per child led to an increase in the child care enrollment rate. Our calculation shows that one additional slot led to about one more child in formal child care, which implies that the demand for child care is so high that a new slot is immediately filled. Figure 2 shows the relationship between the growth of child care slots per child and that of the employment rate of mothers. If reform increases the mother's employment rate, the scatter plot would show a positive association between the two. However, that is not evident.

Indeed, the mean line is almost flat, and our calculation shows that one additional spot led to only 0.1 more working mothers. Despite policymakers' intentions, the evidence shows that reform increased the employment of mothers only modestly, even though demand for child care was very high.

We further examined additional data on mother's employment and her choice of childcare mode and determined that child care reform increased new users, but many of them simply substituted formal care for informal care, such as that provided by grandparents. This substitution is known as crowding out, and it is found in other countries including France, Norway and the U.S.

Does the evidence imply that further reform will fail to increase women's employment even if additional slots are provided?

In my view, child care has the potential to boost the participation rate of Japanese women in the labor market, but the current system does not deliver the full potential. I suggest two possible directions for improving the current system.

First, reallocating subsidies from expensive infant care to less expensive care for older children is worth consideration. The monthly cost of infant care in Tokyo is over 400,000 yen ($3,500), and parents pay only 5% of the cost.

Because the cost for a one-year-old child is about a half the cost for an infant, encouraging mothers to use paid parental leave for a year makes sense. Although paid leave legislation has already been enacted, the government and employers need to ensure that mothers who take leave receive fair treatment in their workplace in practice.

Second, policymakers should consider giving more preferential treatment to low-income families than they currently do. Under the current system, household income has little influence on whether a family receives a slot or not. While single-parent families and those receiving welfare are given a high priority, most two-parent families with low household income receive little preferential treatment in allocation.

Our analysis suggests that providing a subsidized slot for low-income families is likely to enable more mothers to enter the workforce without causing crowding out. This is because they cannot find or afford to use alternative informal care arrangements.

Moreover, assisting low-income families is likely to bring other benefits as well. Recent research, most notably by James Heckman at the University of Chicago, shows that a child care program targeted at economically disadvantaged children improves participants' outcomes when they are adults, including in education, employment, earnings, marriage and health as well as a reduction in them committing crimes.

Heckman estimates that the economic return on the Perry Preschool project in the U.S. is high, at 7-10% per annum. The preliminary results of our studies in Japan also indicate that child care enrollment reduces aggression and symptoms of attention deficit hyperactivity disorder among the children from low socioeconomic status families.

Child care reform implemented thus far is not a silver bullet for boosting the employment rate of women in Japan. However, this does not imply that the government should stop spending tax money to improve the situation. Although the current system has flaws, calibrating the system can not only boost women's participation in the labor market, but also improve the welfare of children and benefit the entire society.

Shintaro Yamaguchi is an associate professor of economics at McMaster University in Canada. He is also an associate editor at Japanese Economic Review and Economic Inquiry.