To survive another 50 years, ASEAN must learn from its past

Internal divisions and big power interventions are likely to persist Personnel prepare flags before a press briefing for the first meeting of the opening session of the ASEAN Foreign Ministers meeting at the Diaoyutai State Guesthouse in Beijing on August 29, 2013. (Getty Images)
CopyCopied

As it celebrates its golden jubilee, the Association of Southeast Asian Nations has come full circle. The daunting challenges it faced half a century ago are as durable as Southeast Asia's regional organization has been resilient.

Notwithstanding occasional intramural border flare-ups and diplomatic bickering, ASEAN's paramount but frequently overlooked achievement has been its ability to avoid war among member states that were once bitter rivals.

To double its lifetime, though, ASEAN will have to hang together even as it is being pulled apart by intensifying global power shifts. Doing so will require it to keep the major powers at bay while persisting as a broker of regional architecture for peace and prosperity, and upholding the organization's unity and regional centrality. This is a tall order, but it is not beyond reach.

ASEAN's ripe middle age belies its early challenges. After previous failed attempts to establish a regional organization, ASEAN came to life as Thailand played a peacemaking role to extinguish a shooting war between Indonesia and Malaysia. Predominantly Buddhist Thailand and the mainly Christian Philippines provided regional balance in religion, language and ethnicity, avoiding potential domination by Muslim-majority Indonesia and Malaysia, which also share a language. Singapore was included because it had recently split from Malaysia.

These four post-colonial states, with perennially-independent Thailand as facilitator, needed a collective regional autonomy to keep the major powers from undermining them, and to cultivate nation-building efforts. Along the way, the youthful ASEAN weathered the Cold War confrontation between the United States and the Soviet Union, together with attendant local communist insurgencies.

For more than half of its erstwhile existence, ASEAN harbored a divided Southeast Asia. Myanmar became reclusive after 1962, while Indochina succumbed to communist takeovers. Although tiny Brunei joined in 1984, it was not until the 1990s, after the Cold War, that ASEAN embraced all 10 Southeast Asian countries.

Building on the establishment of the Asia-Pacific Economic Cooperation grouping in 1989, and the ASEAN Free Trade Area in 1992, the wider membership provided the weight and geographical comprehensiveness needed for ASEAN to become Asia's hub for broader cooperation.

At 50, however, ASEAN finds itself with a new set of challenges that hark back to its formative years. Rivalries among the major powers once again threaten to dominate the region, pitting China against the U.S. in the South China Sea and, to a lesser extent, China against Japan in mainland Southeast Asia.

In the 21st century, history and geography are the drivers, rather than the old ideological battles between totalitarianism and democracy and communism and capitalism. After its "century of humiliation," an inexorably rising China appears intent on reclaiming its past glory as Asia's center and source of power and action.

China's version of "manifest destiny," the concept that drove U.S. expansion across North America, is focused on its Belt and Road Initiative, inspired by ancient "Silk Road" commerce and diplomacy, together with seafaring feats that traversed maritime Asia and Africa in the 15th century. The China-based Asian Infrastructure Investment Bank works in tandem with the BRI, providing development finance to much of developing Asia and beyond.

China's perceived entitlements from history also include land reclamations and the construction of artificial islands in the South China Sea, not far from ASEAN's maritime members -- particularly the Philippines and Vietnam. In mainland Southeast Asia, China has built upstream dams on the Mekong River with reckless abandon, to the detriment of downstream communities in Cambodia and Vietnam.

As with the South China Sea, China offers its own rules for the Mekong, via the Lancang-Mekong Cooperation mechanism, which has marginalized the long-established Mekong River Commission. And while U.S. President Donald Trump has pulled out of the Trans-Pacific Partnership trade agreement, China is keen to move ahead with the ASEAN-centered RCEP, a regional free-trade platform that happens to exclude the U.S.

Geography aids China's superpower ambitions. As in the Cold War, Southeast Asia appears divided between two sides. Its mainland economies are more economically integrated than the ASEAN Economic Community as a whole. Intra-ASEAN trade has hovered around 25% for the past two decades, with overall trade more reliant on partners outside the region. But in the mainland economies, labor market integration underpins several million migrants from Cambodia and Myanmar, who are working in Thailand.

Since 1995 Vietnam has become Thailand's second largest trade partner in the region, supplanting Singapore. Thai foreign direct investment in Cambodia, Laos, Myanmar and Vietnam has increased on an unprecedented scale. Infrastructure connectivity enables road travel between Myanmar and central Vietnam, across Thailand and Laos. Such is the promise of mainland economic integration, even while the AEC moves at a slower pace. 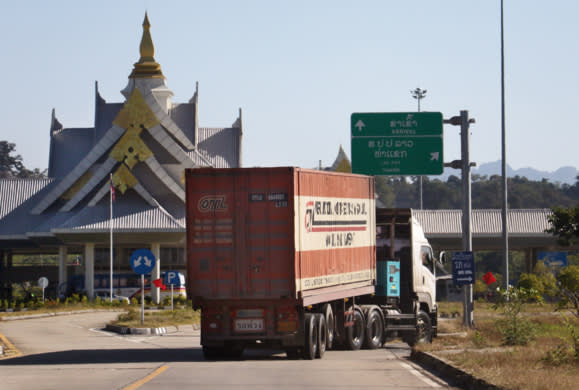 A truck heads toward customs clearance office in Laos at the Thai-Lao border. (Photo by Keiichiro Asahara)

However, Cambodia, Laos, Myanmar and Thailand are about as perturbed by Chinese weapons installation on artificial islands in the South China Sea as the Philippines and Indonesia are about Chinese dam building on the Mekong. ASEAN's mainland-maritime divergence of interests has allowed China to drive a wedge right through the region at will.

The Philippines won an overwhelming legal victory over China on South China Sea issues in an international tribunal in July 2016, but all attempts to include any such wording in ASEAN statements have been effectively scuttled by China-friendly Cambodia. Coup-prone Thailand has also moved closer to China for recognition and support, while Beijing's acquiescence is indispensable for Myanmar's peace process.

To continue its central organizing role, ASEAN must find a way to put a stop to China's blatant divide-and-rule tactics. Doing so requires playing off the major powers against each other, much as ASEAN did in its earlier years. Moving closer to the Trump Administration and to Tokyo would yield more leverage vis-a-vis Beijing in both maritime and mainland domains.

The U.S. and Japan, too, should do more to reinforce ASEAN. Trump's recent White House reception of Vietnamese Prime Minister Nguyen Xuan Phuc and invitations for similar visits by Philippine, Singaporean and Thai counterparts are steps in the right direction to reshape ASEAN's geopolitical equation.

Unless it regains its unity vis-a-vis China, ASEAN's role as broker and creator of institutions that make up Asia's regional architecture cannot be taken for granted. The absence of ASEAN unity and centrality is damaging not only to Southeast Asian countries but also to the major powers, which would lack a buffer and an acceptable regional broker if an effective ASEAN did not exist.

The challenges of ASEAN's past, from regional divisions to interventions by major powers, will remain problematic in the future. To resolve them, ASEAN must dig deep and persevere, warts and all.