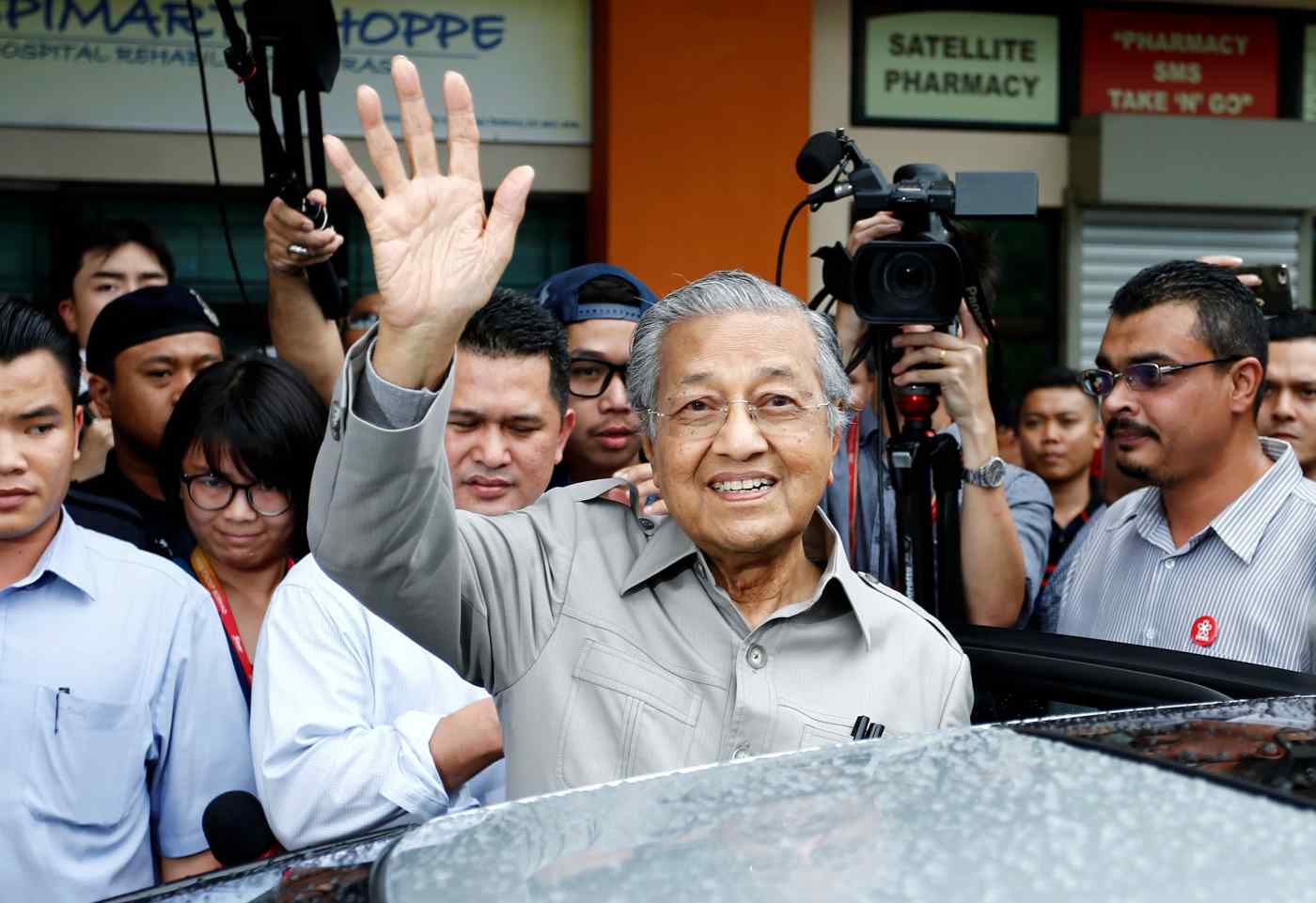 Malaysians might have hoped for a young new challenger to contest the coming parliamentary election and take on the 64-year-old scandal-plagued Prime Minister Najib Razak, who has held office for eight years.

Instead, the main challenger in the polls, due by August, is a 92-year-old former prime minister who retired more than a decade ago, the combative Mahathir Mohamad.

While both men will almost certainly put on a dramatic no-holds-barred political show, neither the contest, nor the result, is likely to reverse the once-promising economy's steady slip-slide off the world's center stage.

In the opening acts of his performance, Mahathir is taking time-heals-all-wounds to a whole new level. First, he has made up with financier George Soros, whom he once blamed for crashing his country's economy in 1997. Now, the 92-year-old firebrand is joining forces with Anwar Ibrahim, a one-time deputy he fired and jailed.

Goading these three to join forces after two decades is a shared revulsion for Najib. The prime minister, for his part, is fighting back with all the means his office puts at his disposal, which is quite a lot. Many Malaysians -- median age around 28 -- can only look on in amazement and, most likely, disappointment.

When populist Mahathir took office in 1981, Malaysia was literally a tropical backwater. He morphed it into a tiger economy, and Kuala Lumpur into a financial hub with one of Asia's most impressive skylines. In 1998, the Petronas Twin Towers opened as the tallest buildings in the world, and resource-rich Malaysia seemed a standard-bearer for development and investment potential.

Then, Malaysia spit the bit. The 1997 Asian financial crisis proved its miracle economy was more facade than reality. Rampant cronyism within the United Malays National Organisation, which has held power for six decades, left the economy top-heavy with debt and financial markets vulnerable to capital flight.

As currency speculators pounced, Mahathir fought back. He pegged the currency, clamped down on the media, imposed capital controls and denounced traders. Mahathir singled out Soros, whom he called a "moron," as the face of a cabal of Jewish financiers taking down a Muslim-majority economy. When Deputy Premier Anwar criticized those policies, he was arrested on vague bribery and sodomy charges.

Malaysia is still dealing with the fallout from that period. Thailand, Indonesia and South Korea strengthened banking systems, liberalized capital accounts and leveled playing fields for foreign investors. Mahathir went the other way, walling off the economy from outside forces in ways that undermined competitiveness. Rather than dismantle affirmative-action policies that, since 1971, give the ethnic Malay majority first crack at public jobs, business contracts and education, Malaysia went further with race-based quotas.

Mahathir left the prime minister's office in 2003, but his post-crisis policy mix and years of drift cement Malaysia's trajectory toward today's middle-income-trap status.

In March 2009, Najib took the premiership talking big about raising Malaysia's game. It seemed an ideal political bookmark: The son of the 1970s-era prime minister -- Abdul Razak Hussein -- who devised Malaysia's productivity-killing race quotas would scrap them. Instead, Najib doubled down on economic apartheid.

Najib created a new state fund, 1Malaysia Development Bhd, that turned the nation into something of a joke in financial circles. It sparked money-laundering investigations from Singapore to Zurich to Washington, after money was allegedly used for purposes as remote from Malaysia as financing the Leonardo DiCaprio film "The Wolf of Wall Street." Since the tale went global in 2015, Malaysia's ranking in the World Economic Forum's competitiveness index fell five places to 23rd from 18th.

The scope of the scandal brought Mahathir back into the fray. On Jan. 7, the opposition Pakatan Harapan coalition named Mahathir its standard-bearer and Wan Azizah Wan Ismail, wife of Mahathir's former rival Anwar Ibrahim, as deputy. Seventy-year-old Anwar Ibrahim himself is in jail, but angling for a royal pardon that would enable him to succeed Mahathir in due course.

But why do Malaysians think a nonagenarian who helped create such an inward-looking model might turn things around? Or as Malaysia Today put it in a recent headline: "Why is Kleptocrat Mahathir Screaming About Kleptocracy?" It is worrisome, too, that the election discourse is generating no concrete ideas to tame inflation, boost wages, increase opportunities for Chinese and Indian minorities or address the problems of an aging population.

Optimists say the end justifies the means. Malaysia has effectively been a one-party state for decades, empowering UMNO to gerrymander voting districts, close ranks around a stable of corporate champions and perfect a massive patronage machine. That hold on power explains why an educated and sophisticated nation of 31 million people ended up with two contenders battling over who is less corrupt.

Mahathir could be the only politician with the clout and tenacity to oust Najib. It is a long shot. Aside from the machine behind Teflon Najib, Malaysia is awash in clannish loyalties among regions and creeds. One of the attack lines against Mahathir, for example, is that he is not a sufficiently devout Muslim. Mahathir retorts that Najib's 2018 budget shamelessly doles out "sweets" in districts facing the closest election contests.

The good news: Even if Mahathir fails to wrest the premiership from Najib's hands, his blistering attacks are shining a spotlight on UMNO's complacency and dysfunction. It is a much-needed wake-up call as Indonesia, the Philippines and Vietnam vie for the share of foreign direct investment not racing to China.

The bad news: Mahathir is hardly an ideal change agent to drag closed, risk-averse Malaysia Inc. into an increasingly dynamic global economy. Malaysia must reduce the stifling role of government, shift toward high-value-added production, increase innovation and halt a brain drain caused by Chinese and Indian talent fleeing to Singapore and Hong Kong. And yet this election is more about two political titans brawling over who is less shady than finding a new way forward.

Time is not on Malaysia's side. Entertaining for sure, Mahathir vs. Najib probably will not end a 20-year drama and will exact a high cost on the economic future. Reversing course requires fresh thinking and an abrupt change in policy priorities -- both in short supply this election season.