Experts call for measures to narrow psychological distance during the games TOKYO -- The COVID-19 pandemic has dominated discussions around the Tokyo Olympics, but the mental well-being of athletes is also a health concern for visiting teams.

In addition to the pressure of competition this summer, measures aimed at reducing the spread of the virus mean that athletes will have little opportunity to blow off steam. Human interaction will be discouraged, and competitors will be requested not to visit places other than venues, training centers, and their accommodation.

The Olympic Village, where many events usually take place, will be a lot quieter. Athletes will be asked to eat meals in the main dining areas as quickly as possible, and alcohol may be banned. Their families will not be able to come to Japan to watch them compete.

Such restrictions could affect athletes' mental health, experts say. "Many athletes may feel isolated. They need empathy, understanding, and support to ease the sense of loneliness," said Hisashi Tanegashima, sports psychologist and professor at Nihon University.

A clinic with services that include psychiatric counselling will be set up in the Olympic and Paralympic Village. But some countries are taking extra steps to keep athletes in a healthy state of mind. For example, the British Olympic Association will be sending a mental health expert team to support athletes and staff.

"From a GB perspective, the mental health and well-being of the athletes and staff is a primary objective for the British Olympic Association," a BOA spokesperson said. "Mental health is an important facet of making sure everyone can perform at the Olympics."

While doctors trained in mental health have accompanied the team before, "this is the first time there is a dedicated mental health team. It is a really important element of our support for the delegation," the spokesperson added.

The mental health team will be led by a clinical psychologist and supported by a specialist in mental health, as well as a team of around 10 mental health champions, who have training and knowledge in this area. Overall, the BOA expects to take around 370 athletes and more than 500 support staff to the games.

The Australian softball team was the first foreign sports organization to come to Japan, arriving on June 1. They are staying in Gunma, a prefecture northwest of the capital.

Deidre Anderson, athlete well-being manager for Softball Australia, said that the team monitored athletes' well-being on an app. By having them rate their sleep -- the first thing impacted when one's well-being is diminished -- the team would get an update if an athlete's sleep quality was below a certain level, Anderson said.

China in January published a manual called "Psychological Guide For Active Athletes," as part of the country's preparation for the Tokyo Olympics. "When you fail, tell yourself it's because you haven't tried hard enough, not because of your capability," it said. The manual is downloadable to smartphones. 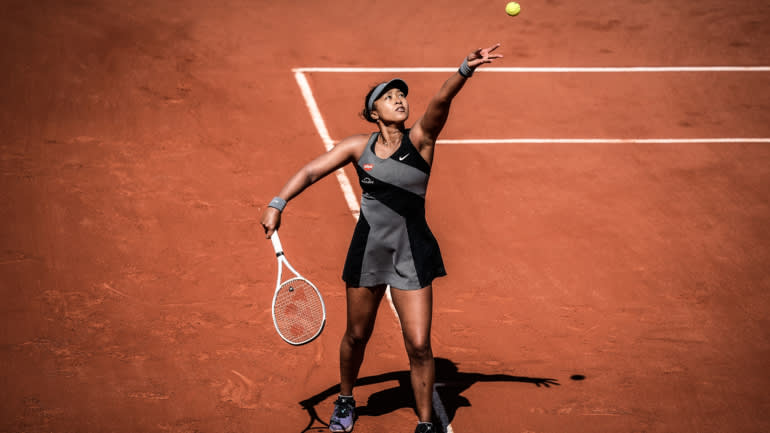 Naomi Osaka in action during a match at Roland Garros Stadium in Paris on May 30. She pulled out of the tournament after talking about her battle with depression.   © Reuters

"Her remarks gave society an opportunity to look at the fact that even top athletes suffer from mental health issues. More people including coaches should be aware of this," said Hiroaki Yamamoto, a psychiatrist who is also a board member of the Japanese Associationof Sports Psychiatry.

Osaka is not alone in her suffering.

A survey conducted last year by Stanford University and Strava found that one in five U.S. professional athletes reported difficulty exercising due to mental health issues, a lack of motivation, or COVID-19.

A 2020 survey conducted by Japan's National Center of Neurology and Psychiatry found that 32.3% of Japan Rugby Top League players had experienced symptoms of mild anxiety and depression in the previous 30 days. Some 7.6% of respondents said that they had suicidal thoughts in the previous two weeks.

Yamamoto at the Japanese Association of Sports Psychiatry warned that athletes could be exposed to online attacks.

Some are already experiencing this. On May 7, 20-year-old Japanese swimmer Rikako Ikee said that she had been receiving messages on social media that called on her to skip the games. "To be honest, there were some messages that really hurt my feelings," she said in a Twitter post.

Yamamoto added, "Social distancing is important in Tokyo Olympics, but an effort should be made to narrow the psychological distance with the athletes through online tools."

The Chinese Taipei Olympic Committee said while it has mental health therapists in Taiwan's national sports training centers, it does not have a plan to send any of these experts to Tokyo due to limits on the number of participants.

Tokyo organizers have cut the number of officials and other personnel coming to Japan from 180,000 to under 78,000, as part of infection prevention measures.

"We continue to host simulation competitions to create a positive atmosphere and help athletes build positive goals to ensure both their mental and physical statuses are ready for competitions," said a spokesperson for the committee.

"Except for qualifying athletes, we can't add any new names to the list now, and as far as I know it doesn't have any mental health expert," said Rajeev Mehta, secretary-general of the Indian Olympic Association.

"It's not possible right now [for us to add a mental health expert] but it's a very good idea" to be considered for large events, especially given rules around the current COVID situation that could leave many feeling isolated, he added.

Thana Chaiprasit, who oversees the Thai team, said there were no plans to bring any mental health specialists to Tokyo due to COVID limitations. This in large part has to do with the small team of 40 to 50 athletes the country is sending, which means their quota for other officials is just three. As such, the team is only taking two doctors and a medical assistant.

But Thana said athletes can be supported using online tools.

"If there is some mental stress or any mental problems in the Thailand team during the Olympics, we could use a video call to allow our athletes to consult psychiatrists here in Bangkok," Thana said.