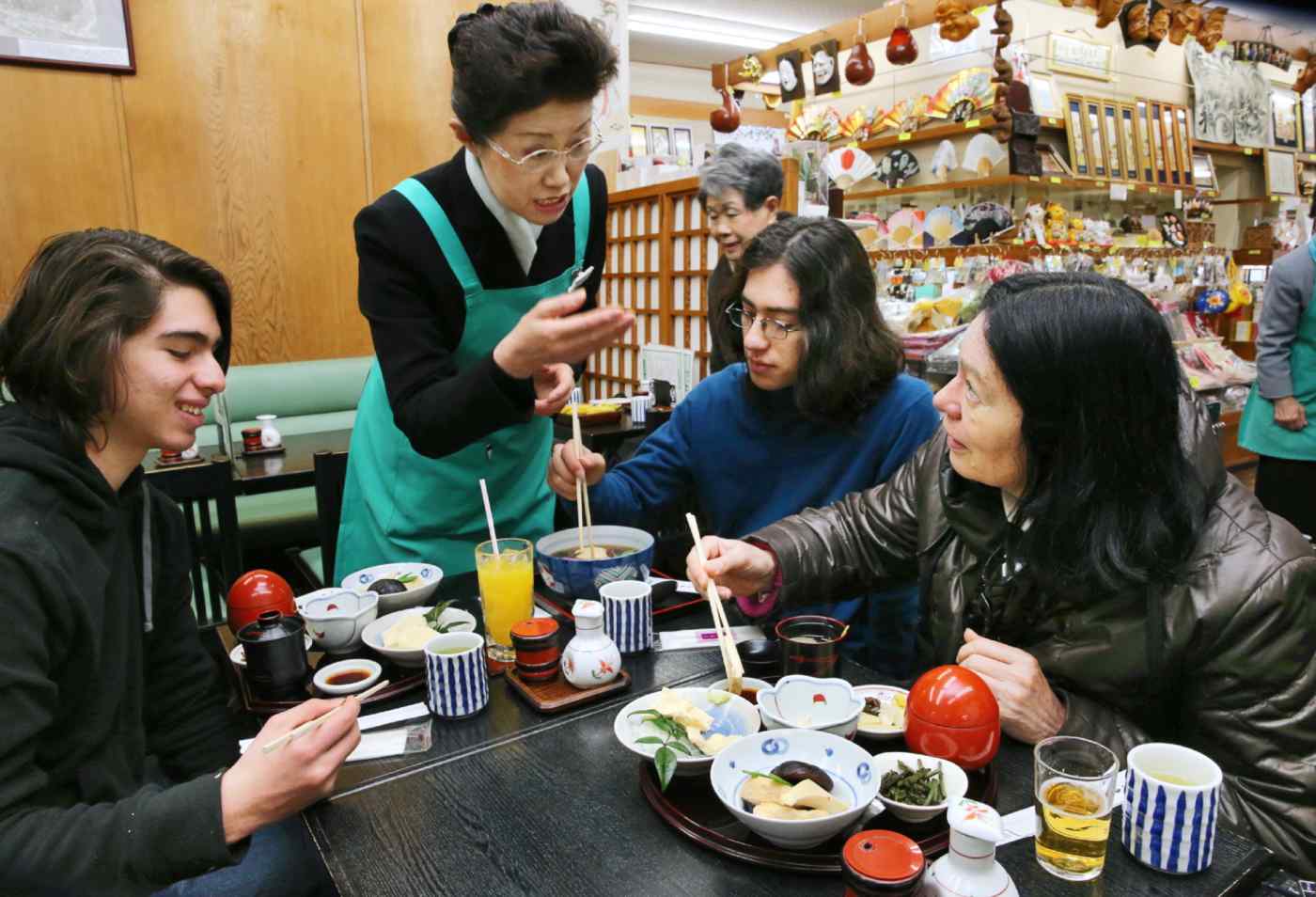 TOKYO -- Top-notch Japanese service is a source of pride for the population. It is also, in many ways, a myth.

Foreign tourists that come to Japan often expect to arrive in a high-tech utopia populated by the world's most courteous people. They are often disappointed.

Japan last year achieved its goal of increasing foreign tourists to more than 10 million. Tokyo will host the 2020 Olympic Games. That means more yen-packing tourists for restaurants, stores and other businesses in the service sector. Or does it?

The Nikkei Marketing Journal asked 100 foreign visitors to Japan about problems with the country's services. The results point to a simple problem: barriers to communication in terms of language, culture and design. The "Galapagos Syndrome" commonly associated with Japanese manufacturing appears to have reached the service sector.

Japan's generally monolingual services dominate the list of complaints. Foreign visitors are unhappy with explanations about services and the poor English language skills of those that provide them.

"The subway network is too complex," said a 41-year-old German woman lost in the labyrinth of Tokyo's Otemachi Station. "I asked station staff for help, but they didn't understand English at all." The same kind of story is told again and again.

"My children were upset to find no English channels on the hotel TV," said a 48-year-old Australian man.

Rage against the machines

The third most common complaint about Japan was its complicated machine interfaces. "The ticketing systems at restaurants are incomprehensible," according to 19 respondents. That's just the start. Once the washoku Japanese cuisine is secured, tourists said restaurants don't explain how to eat the food.

Things that Japanese take for granted are often unfamiliar to tourists. "Store staff don't seem to care," said a 24-year-old Thai woman. "They just mind their own business, like robots." Many visitors long to see those with poor English at least show a desire to communicate.

"I was looking forward to Japanese cuisine. It wasn't so good." President Shigekazu Saito of the Leisure Service Institute, which offers inbound consulting for corporations, often hears such comments.

Perhaps people would feel differently if they were not daubing ketchup on their raw horse. Saito recounts tales of tourists "dipping sukiyaki into raw egg white," and "eating sashimi (raw fish) with Western condiments" rather than soy sauce.

Japanese services may miss important business opportunities unless they address this sort of misunderstanding.

Call that a steak?

The small portions served in Japanese restaurants was sixth on the list of foreign complaints.

More companies are trying to accommodate foreign tourists, by hiring foreign nationals, for example. Many cannot afford to do so.

Japan's cash-strapped service companies are going to have to use a little imagination to overcome language barriers.

Many Japanese service companies consider only domestic customers. The Nikkei survey shows that foreign visitors often feel a degree of discomfort but not enough to complain.

"I'm not saying I'm dissatisfied, and I do understand their situation," said a Chinese woman in her 30s. "But isn't breakfast at Japanese inns too early? On vacations, many visitors would rather stay in bed till around noon and have brunch."

In Tokyo apparel stores, for example, staff recommend single items for Japanese customers. An employee at an apparel chain for young women operating in the Shibuya 109 fashion complex said this is a mistake when dealing with foreigners. "If we recommend various items to foreign tourists, they sometimes buy as many as 10," she said.

Survey subjects expressed dissatisfaction with Japan's tourism infrastructure. Many visitors are disappointed at the limited availability of free Wi-Fi access and credit-card options compared to other developed countries.

"The failure to provide free Wi-Fi" ranked second on the list of complaints. Around 30% of respondents saw this as a problem.

There are more free Wi-Fi signs in cities recently, but "far fewer than in other nations, and the systems are harder to use," said a 59-year-old Australian woman.

Free in-store Wi-Fi often requires registration in Japan. Some stores demand customers have a contract with a Wi-Fi provider to get online.

Tourists have been known to make reservations based on hotels' advertised free Wi-Fi. Once there, they often find, to their chagrin, that it is only available in the lobby.

"Can't I even check my email in Japan?" a disgruntled 21-year-old woman from New Zealand asked.

Many complained about payment options. "Many stores are cash-only" ranked fifth on the list, and "difficulty withdrawing yen or getting foreign currency exchanged" ranked ninth.

Many foreigners come to believe that Japan is a cash-only society.

A Visa Worldwide (Japan) survey of 300 foreign visitors last year found 60% believed credit cards are not accepted in places where such services are not advertised.

"Stickers on the door can boost customer traffic and per-capita purchases," said an official at a retail association covering Tokyo's Harajuku-Omotesando area.

"I can't withdraw cash using my bank card anywhere," complained a 49-year-old Australian woman. This problem will be resolved. Leading bank ATM systems, installed by NTT Data, are expected to begin accepting bank cards from the Asia-Oceania region as soon as fiscal 2015.

The 10th most common complaint was a surprise: "Few souvenir stores." It seems difficult to buy standard souvenirs, such as keyrings and magnets, in central Tokyo.

Many tourist complaints seem easy to resolve. Over to you, service workers.

100 foreign visitors, mainly on foreign-language tours by Hato Bus in late January, were asked to select multiple answers from among 18 common complaints listed about Japanese service companies. The items were ranked based on total votes.