TOKYO -- Japanese pharmaceutical companies are racing to claim a piece of the promising market for iPS regenerative medicine treatments. 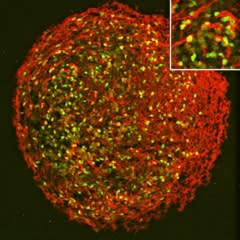 A cluster of neuron cells developed from iPS cells   © Courtesy of Daisuke Doi, the Center for iPS Cell Research and Application, Kyoto University

Pioneered by Kyoto University professor Shinya Yamanaka, induced pluripotent stem cells can develop into any type of body cell, giving them the potential to repair damaged tissue and treat a variety of diseases.

A team of researchers led by Kyoto University's Jun Takahashi announced March 6 that they had devised a technique to create neurons from iPS cells in high volume and in a manner that can secure their safety. The team expects to be able to conduct clinical testing to treat Parkinson's disease as early as 2016.

The technique developed by Takahashi's team at the Center for iPS Cell Research and Application involves using blood from patients with Parkinson's to create iPS cells. Those cells are then used to create neurons that are inserted into patients' brains.

The goal is to raise levels of the neurotransmitter dopamine. The subjects will be closely monitored for more than a year to see whether the disease's progress has slowed or if brain function has improved, reducing the need for caregivers.

The Kyoto University team has devised a technique for creating neurons from iPS cells that is over 20 times more effective than previous methods, as well as a way of selecting cells suitable for implantation.

The team has already verified the therapeutic effects of implanted neurons derived from iPS cells in tests on mice and primates. They aim to submit a proposal for human trials, which will include six participants, to a Kyoto University board early next year. It can begin human trials after receiving approval from the Ministry of Health, Labor and Welfare.

Once the Parkinson's trial is underway, researchers expect it to take about nine months to check the safety of implanting the artificially created neurons. Takahashi says there is little risk they would cause cancer.

The huge growth potential of the market for regenerative medicine treatments and related equipment has attracted the attention of pharmaceutical companies.

The same day, Dainippon Sumitomo Pharma set up a joint venture named SighRegen with Healios, a startup based in Kobe. The new venture will develop iPS cell-derived retinal pigment epithelial cells for the treatment of age-related macular degeneration and other eye diseases.

"Although this is not an area we are familiar with, we hope to make regenerative medicine a new core business," said President Masayo Tada of Dainippon.

The joint venture aims to develop, manufacture and market Japan's first regenerative medicine treatment, which may be approved as early as 2018. Dainippon will invest 5.2 billion yen ($51.2 million) in the development of the therapy. Healios will be responsible for obtaining the health ministry's approval for production and sales.

The pharmaceutical business has traditionally mass-produced drugs through chemical synthesis. Companies in the sector generally do not have expertise on cell culturing and other technologies for developing and manufacturing cell-based treatments.

"We have little, if any, expertise in these areas," admitted Dainippon's Tada. The need to acquire cell biology technologies was also behind the company's move to work with SanBio, a biotechnology startup focused on the discovery and development of regenerative cell therapy products. The two companies have agreed to co-develop a new cell therapy in the U.S.

Dainippon Sumitomo's alliances with startups are a vital part of the company's strategy for the new business.

The iPS research boom in Japan was triggered by Yamanaka. He won a Nobel Prize in 2012 for developing a way to turn cells from anywhere in the body into stem cells, avoiding the need to destroy embryos.

Many other Japanese researchers are involved in cutting-edge clinical research projects. A married couple who graduated from Kyoto University's Faculty of Medicine are on the leading edge of research in iPS-based therapies.

"We are finally ready to start actual clinical research," said Kyoto University's Takahashi. His achievement was published March 7 in the electronic version of Stem Cell Reports, a U.S. journal.

"We will try to confirm the effectiveness of our technique with experiments on monkeys this year," he said. "We believe we will be able to apply for permission for clinical research next year."

The two Takahashis will be key to the further facilitation of the iPS revolution.