Since the U.S. company set up its Japanese unit in 2001, a number of employees have gone on to establish startups. Many of these fledgling companies offer multilingual online services and look nimble enough to expand quickly if demand explodes. 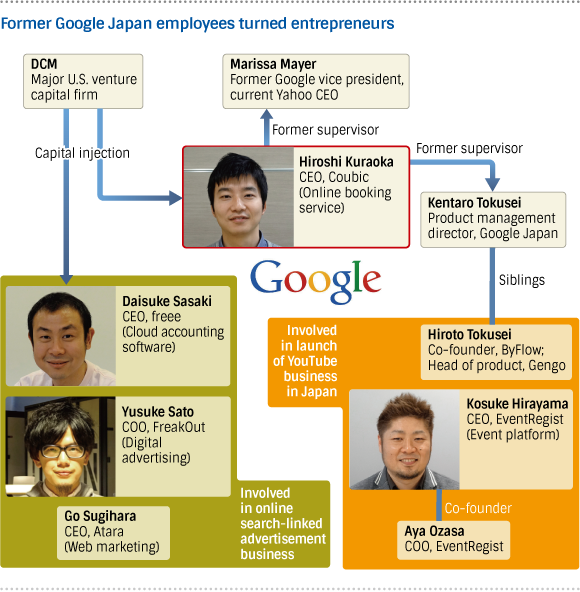 Hiroshi Kuraoka joined Google's Japanese arm after graduating from university; he was one of the first on board. His responsibilities included developing search-related services. He reported to Marissa Mayer, the former Google U.S. executive and current Yahoo CEO.

Yusuke Sato, another former Googler -- a term sometimes used to refer to Google employees -- has established a digital advertising company called FreakOut. The chief operating officer has landed major customers including Amazon.com. The still-unlisted business is estimated to be worth more than 10 billion yen ($97.8 million).

Daisuke Sasaki, a former product marketing manager at Google, is now the man behind freee, a cloud-based accounting service provider. The business has about 70,000 clients.

So what explains Googlers' propensity to strike out on their own? Kosuke Hirayama, CEO of event management and online ticketing company EventRegist, said the Silicon Valley-based giant has an atmosphere that encourages entrepreneurship. Many Google employees are even willing to help former colleagues launch businesses. Plus, Google is known to spend considerable money and time on keeping engineers happy and motivated -- and keeping the creative juices flowing.

Employees of Google Japan also feel they are part of a global organization, not just a Japanese subsidiary, according to Norio Murakami, who served as head of the unit for six years from 2003. At Google, workers are organized according to their roles and they often report to superiors in other countries.

It's tough out there

Whether one hails from Google or not, entrepreneurship is always a risky business.

Hiroto Tokusei helped put the Japanese YouTube business on track. He decided to launch a new company, believing he would be able to make the most of his skills and knowledge. The result of that ambition was ByFlow, a social media operator that connects people through common interests and possessions.

Less than a year after its launch, ByFlow's business was handed off to an external operator. Tokusei and other co-founders pulled out. Tokusei, who says he learned a lot from the experience, is now serving as head of product development at Gengo, a translation service provider.

Japan's government hopes to encourage more individuals to take the entrepreneurial plunge. Currently, slightly less than 5% of Japanese enterprises are considered startups. The goal is to double that figure by 2020.

If this part of Prime Minister Shinzo Abe's growth strategy is to succeed, ex-Googlers' endeavors and other technology-oriented ventures are likely to play a key role.