Manufacturers turning away from OLED TVs

TOKYO -- OLED televisions, which once held promise as the mainstream successor to LCD TVs, are losing favor among manufacturers as high costs take their toll and models using liquid crystal displays decline in price and improve in quality. Panasonic plans to postpone mass production of the displays, which form a picture on a thin, bendable layer of organic light-emitting diodes. Sony will suspend development of OLED TVs. Even Samsung Electronics has decided to halt investment in the field. 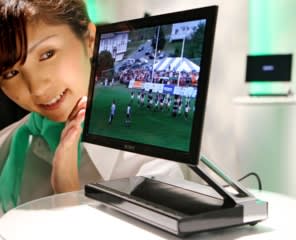 Panasonic, which uses printing technology to make OLED displays, began joint development with Sony in 2012. It dissolved the partnership at the end of last year and has since pursued the business on its own for medical and other applications. It originally planned to kick off mass production in fiscal 2015 but will postpone it to fiscal 2016 or later.

The difficulty of lowering production costs has proved a major setback for Panasonic. Prices for 55-inch OLED TVs would exceed 1 million yen ($9,856) by current estimates, while 4K LCD TVs sell for 300,000 yen to 400,000 yen at big-box electronics stores.

Sony also does not see real demand for OLED TVs taking off anytime soon. The company will freeze OLED TV development for now, shifting focus to medical and broadcasting applications.

Sony intends to expand its lineup of 4K TVs using LCD technology. In this area the company currently enjoys an industry-leading share of the global market and could help its TV business return to the black for the first time in 11 years in the year to March 2015. Sony's 4K TVs accounted for more than 20% of the value of all shipments in 2013 and sees an opportunity to leverage its brand appeal to expand in this market. It will release eight 4K models this summer, which is more than double the number of last year, and aims to quadruple sales this fiscal year. The 4K models will constitute around 40-50% of Sony's total lineup of large flat-panel TVs, compared with the 10-20% ratio of last business year.

Meanwhile Sony will reassign the people now working to develop OLED TVs at the Atsugi Technology Center and elsewhere to other tasks, including development of 4K-related products.

At the same time, the company will take steps to cut costs in order to turn its TV business around. That includes plans to spin off the TV unit in July, and also to slash labor expenses for consumer electronics products by more than 20%.

Samsung has scrapped plans to build production lines for TV-use OLED panels as early as this year. It will not release any new OLED sets.

"With the improved picture quality of LCD TVs and drops in their prices, OLED TVs no longer have any advantage," said Hisakazu Torii, a Japan-based vice president at the U.S. market research company.