KUALA LUMPUR -- Malaysia Airlines, hit with the loss of one of its flights in March, is also under pressure from shareholders to sort out its finances.

At a shareholders meeting June 25, the national carrier admitted that it needs to drastically change the way it does business but offered scant details on what it has in mind. When the floor was opened for questions, management faced quite a barrage.

According to attendees, most of the queries focused on why the company has performed so badly, posting huge losses for three consecutive years. This despite a number of business plans crafted with the goal of escaping the doldrums.

Another key topic was the financial impact of flight MH370, which went missing en route from Kuala Lumpur to Beijing with 239 people aboard, more than half of whom were Chinese nationals. And shareholders demanded to know how management intends to get the business back on track.

Executives assured the stockholders that the ill-fated flight was insured, barring the damage to the carrier's reputation. Malaysia Airlines has seen a 60% drop in business from China since the plane was lost March 8.

As for a turnaround, management would only say it is looking at all options.

"Malaysia Airlines should revamp everything," shareholder Chang Tek Huat, 65, told reporters. He added that the board should take responsibility for the weak results that have plagued the company for 15 years. 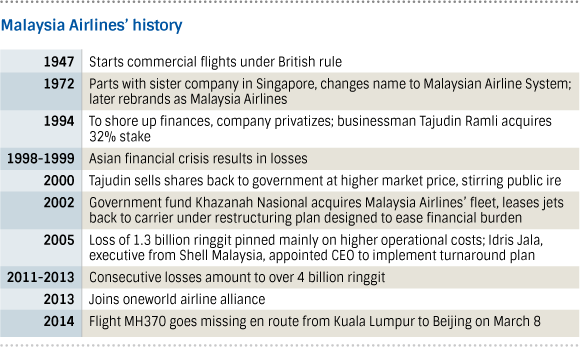 During the meeting, minority shareholders voted down one of eight resolutions, covering payment of directors' fees amounting to 396,000 ringgit ($123,000). The resolution was subsequently passed through the polls by the majority shareholders who have control over 70% stake, but the directors ultimately decided to decline the remuneration.

With business dwindling and cash running low, analysts have drawn up a few possibilities for recovery, including bankruptcy. Malaysia Airlines is extremely reluctant to go that route.

"We will consider bankruptcy if we are insolvent, but we are not," Chairman Mohamad Nor Yusof said after the meeting. The airline, he said, is still able to pay its debts, with cash reserves of about 3 billion ringgit.

Khazanah Nasional, the majority shareholder, said last month it will unveil a rescue plan in about a year. The national investment fund owns 69% of the airline.

The carrier says fuel accounts for more than 40% of its operation costs, followed by salaries paid to its nearly 20,000 employees. A Malaysian brokerage has suggested that the airline slim down by reducing flights and manpower.

RHB Research Institute, in a recent note, projected that the airline would be able to cut its losses to 349 million ringgit in fiscal 2015 "at the expense of a one-off mutual separation scheme." This downsizing, RHB said, would entail an upfront cost of 750 million ringgit.

In its 42 years of incorporation, Malaysia Airlines has gone through a series of ownership changes. It went from being a wholly owned state company to private hands, and then in 2000 it reverted to majority government ownership. Excessive reliance on the government is considered part of the company's problem.

Whatever happened, there was always "a grandfather to fall back on," said an analyst at the Institute for Democracy and Economic Affairs, a local think tank.