Japan's robots keep evolving, but can they outrun rivals? OSAKA -- Robots are changing, evolving from insectlike creatures of the factory floor to bipeds that can interact and are much more versatile and easier to work with. Easier programming is making them more human-friendly than ever.

Kawada Industries has developed a humanoid model that someone with no special expertise can operate on an assembly line. Mitsubishi Electric recently introduced a new robot with a state-of-the-art touch sensor. And the Japanese are not the only players in robotics. Competitors from China, South Korea and the U.S. are all racing to develop the next generation of mechanical helpers.

A Kawada Industries subsidiary, Kawada Robotics, is especially proud of its Nextage robot. With a few mouse clicks, the humanlike device moves its arms, neck and hips. Using four cameras built into its head and hands, it assists workers building machines on an assembly line.

Kawada has sold over 150 Nextage robots since their 2009 launch. In the beginning, every move had to be meticulously preprogrammed. Smaller manufacturers that make many different products showed interest, but most hesitated to buy because of the complex programming required.

Kawada improved the robot's built-in cameras so that it can now pick up parts from a workbench on its own, for example, without a special program for the task. "The robot can pick up soft sheets and transparent objects as well," said Kawada Robotics Director Naohito Shiroma. Advanced sensor technology makes this possible.

The company also developed an intuitive, video gamelike interface that workers can use to teach the robot to do specific tasks. "Anyone can use the robot by taking a two-day course to learn how to operate it by computer," said Shiroma. Once a work sequence is entered, the robot follows it automatically. Nextage robots are already working in factories -- processing food, assembling servers and the like.

At Mitsubishi Electric's Kani plant in Gifu Prefecture, robotic arms put connectors into electronic products. Using two fingers, the machine deftly picks up a 1-by-2cm connector. Its state-of-the-art touch sensor allows it to apply just the right amount of force. The plant is equipped with eight robots, each of which performs a series of complex tasks that once took several industrial robots to accomplish. The new machines are easier to use and work well in cellular production systems, where line workers put things together in small clusters.

The robots are the latest iteration of a device introduced in 2011. Mitsubishi Electric has sold about 10,000 of them for machine assembly and food processing. "They really show their stuff in home appliance production, for instance, where (product) models change frequently," said Norio Kodaira, president of the Robotics Society of Japan (RSJ) and head of Mitsubishi Electric's robotics technology division. Easy-to-use robots that can work side by side with people could help Japan maintain its manufacturing edge.

Many specialists agree that until recently Japan led the world in robotics. A survey by the Japan Patent Office placed Japan in pole position in 2007, with 1,719 robotics-related patent applications, compared with 1,094 for Europe, 533 for the U.S., 499 for China and 416 for South Korea.

Newcomers are also applying for many robotics patents. In 2011, about 1,320 applications came from China, nearly three times as many as in 2007 and almost as many as Japan's 1,583. The number of applications from South Korea doubled over the same period to 857. To stay in the lead, Japanese manufacturers will need to focus on making robots easier to use.

Factories are not the only place one sees mechanical helpmates these days. Panasonic recently introduced the RoboticBed, which shape-shifts into a powered wheelchair, giving elderly or disabled users greater mobility and independence. It does not look much like a robot, but a Panasonic spokesman boasted that "it's crammed with robotic technology, including a laser positioning sensor." 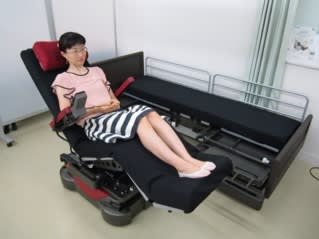 This bed made by Panasonic morphs, Transformer-like, into a powered wheelchair to help patients get around.

Japan's robots continue to evolve, but developers and other industry insiders are looking nervously over their shoulders at U.S. companies, which are particularly strong in software and and computing.

Companies such as Google have been pouring money into machine technology, traditionally Japan's turf. Last year Google bought Schaft, a humanoid robot development venture that began at the University of Tokyo. Coupled with Google's advanced software, it could become a threat to Japanese competitors. Meanwhile, IBM has developed chip technology that mimics the human brain for data processing.

"Japan was the world leader in robotic technology up to around 2000, but it may have given up that position (to the U.S. and Europe)," said Tokyo Institute of Technology professor emeritus Shigeo Hirose, a leading expert on robotics. "In Japan, there is a valley of death between academic research and commercial application."

Companies with a bottom line to watch tend to be cautious and will not jump into the robotics business unless they can clearly see profits down the road. U.S. high-tech companies, many of which receive funding from the military, often find it easier to develop robots with commercial applications. Europe is actively developing technology for space exploration and nuclear power, helping sustain its robotics work across the board.

Despite these competitive threats, Japan still has certain advantages. "Japan produces the parts for high-performance sensors and motors," said Sadao Kawamura, a professor at Ritsumeikan University and former president of the RSJ. To make the most of Japan's strengths, universities and the private sector must work to create new markets, rather than responding to challenges, well, robotically.