SYDNEY -- On two recent occasions, a pair of Sukhoi Su-30 fighters have taken off from their base near the old Indonesian trading port of Makassar and flown far across the Indonesian archipelago to intercept unidentified aircraft.

One of the mystery planes, a light aircraft being ferried from Darwin in northern Australia to its new owners in the Philippines, was chased a long distance before being forced to land in Manado, a city on the Indonesian island of Sulawesi. The other, an executive jet flying Saudi officials to Brisbane ahead of the Group-20 meeting, was ordered to land in the Indonesian city of Kupang on the island of Timor. 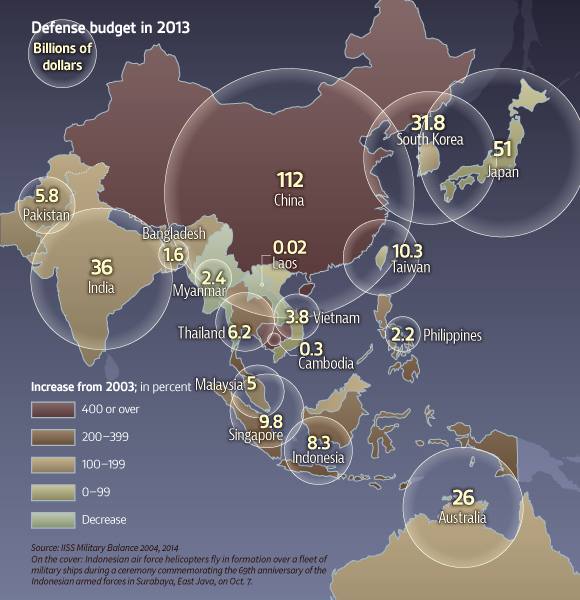 In both cases, fines were imposed and the planes were allowed to continue to their destinations. It is unclear whether the Indonesian pilots could have taken any hostile action, since missiles have not yet been delivered for the Russian-made jets.

But the confrontations underline a shift in military capability among the nations of Southeast Asia. A decade ago, the Indonesian air force had little advanced combat capability, as its fighters were largely grounded by a lack of spare parts due to economic stringency and arms embargoes related to human rights abuses.

Now it is flexing its muscles. Indonesia's official defense budget has increased fourfold over the past decade to $8 billion. Meanwhile, spare parts have been found for the air force's grounded Lockheed Martin F-16 fighters; some newer versions have been ordered; eight Boeing Apache attack helicopters have been bought; and a big naval expansion has taken place as part of a $13.2 billion, five-year modernization program announced in August 2013. The Su-30s were bought using a $1 billion credit line opened by Moscow in 2007.

The expansion appears far from over. Recently elected President Joko Widodo is making self-sufficiency and exploitation of the archipelago's marine resources a theme of his government, and he is already talking of a further doubling of defense spending.

This stance reflects a sea change in Southeast Asian military thinking. For decades, the region's militaries focused on domestic insurgencies, border security and, in some cases, maintaining political control. Large land armies were the principal requirement.

These days, governments in the region are more concerned about securing air and sea space so they can exercise sovereignty over marine and seabed resources, contest overlapping claims, prevent the plundering of forests and minerals, and monitor the movement of people. This requires more investment in naval and air power.

With their economies moving into the so-called middle-income bracket -- higher in the case of fully developed Singapore -- governments have more to spend on advanced military platforms and weapons. Southeast Asia's defense spending grew by 5% on the year to nearly $36 billion in 2013, according to the Stockholm International Peace Research Institute, just ahead of the 4.7% increase for East Asia to $282 billion.

Meanwhile, established defense manufacturers in Europe, Russia and North America are eager to sell, with lavish export credits being made available to sweeten deals. Closer to the region, Japan and South Korea, the industrial giants of East Asia, are also entering the arms bazaar.

China's growing assertiveness in claiming the South China Sea as sovereign territory -- against counterclaims from five Southeast Asian countries -- has brought encouragement from the U.S., Japan, India and Australia, and help in enhancing the capabilities of regional armed forces and coast guards.

Consequently, the region is seeing large-scale acquisitions of equipment aimed at establishing the ability to contest control and make potential rivals think twice about intruding.

Navies are acquiring or expanding fleets of quiet conventional submarines to lurk in sea approaches. Indonesia, Singapore and Vietnam are buying new-generation submarines, with Malaysia and Thailand considering following suit.

South Korea is building the first of 12 German-designed Type-214 submarines for Indonesia, with follow-on boats to be built in Surabaya, Indonesia. Vietnam has acquired the first of six Kilo-class submarines from Russia to help keep China out of contested waters, with low-profile financing from Japan and training from India.

To the south, Australia is considering buying advanced Soryu-class submarines built by Mitsubishi Heavy Industries and Kawasaki Heavy Industries, following a decision by the Japanese government to lift the country's self-imposed restrictions on military exports.

"Submarines are powerful offensive weapons which can bring a dramatic jump in capability against [other countries'] submarines and ships," said Tim Huxley, director in Singapore for the International Institute of Strategic Studies, a British think tank that runs the annual Shangri-la Dialogue forum in the city-state. "They also can be used as land-attack platforms. The sort of big new subs that Singapore is going to buy could be equipped with vertical launch tubes for that kind of missile."

Some navies are building large "flat-top" ships that can carry swarms of anti-submarine helicopters or quickly land troops on outlying islands or oil platforms. Japan set the trend with two Hyuga-class helicopter carriers, built by IHI. And the country is adding two even bigger vessels -- Izumo-class carriers. South Korea is building a second Dokto-class helicopter carrier.

Australia has just commissioned the first of two helicopter carrier and landing ships, while Singapore has shown off a redesign of its existing half-deck Endurance-class landing ship as a more capable marine aviation platform.

All four of these countries are helping develop or are planning to buy U.S. company Lockheed Martin's F-35 Lightning II strike fighter -- a so-called fifth-generation plane with flight- and weapons-control characteristics far in advance of any military aircraft in service. Though the governments are looking initially at the conventional takeoff version for their air forces, the short and vertical takeoff capability of the F-35B variant would give them the option of converting naval helicopter platforms into carriers for fixed-wing aircraft.

While they wait for the F-35, the Australian and Singaporean air forces are acquiring upgraded versions of their existing aircraft, respectively the F-18 Super Hornet and the F-15SG Eagle, both made by Boeing. The power of these latest fourth-generation fighters and strike aircraft is enhanced by "force multipliers," such as other aircraft dedicated to airborne surveillance and control, and in-flight refueling tankers that extend range and flying time.

Armies have generally been reluctant to shrink their troop numbers (except in Taiwan, where the end of conscription in 2016 will see a significant reduction) and many still insist on prestige capabilities, such as medium-heavy tanks that are more suited to European or Middle-Eastern battlefields.

But where there is not already separate marine corps, some armies are designating units for the role. One of Australia's commando battalions, based in Townsville, Queensland, will train for deployment aboard the new helicopter landing ships, and the Malaysian army is also assigning units to a marine-type role.

"They're coming into the same sort of league as Western countries," said Huxley. "The most extreme case is Singapore. There's going to be no difference in the sort of front-line capabilities that Singapore and Australia have. Both of them are going to have F-35 strike fighters; both are going to have ships that can operate aviation, possibly including F-35s; both have got in-flight refueling tankers, long-range surveillance platforms and so on."

It would be wrong to say that all this force expansion and upgrading in Southeast Asia and Australia is related to the perceived threat from China. The China factor is clearly the prime motivator for Vietnam and the Philippines, which is acquiring 10 large coast-guard cutters from Japan.

Other countries, such as Australia, Thailand and Singapore, are aligned with the U.S. but trying to balance defensive precautions against Chinese power by stepping up interaction with the People's Liberation Army.

In late 2014, Singapore sent a large contingent from its army to China for joint exercises, while Australia hosted a small PLA unit for training near Darwin, where U.S. Marines are rotated for six months every year as part of the "pivot" to Asia announced by U.S. President Barack Obama.

The 10-member Association of Southeast Asian Nations includes all the countries in the region that have territorial disputes with Beijing in the South China Sea. But the countries in the bloc have struggled to find a common line on the issue or develop a coherent strategic posture. One member, Cambodia, has sometimes acted as a proxy for China in regional forums.

In part, the growing defense spending is about prestige. Few analysts see much rationale for Thailand to acquire the three submarines its naval planners say it needs. The Indonesian army's recent purchase of Leopard-2 tanks, manufactured in Germany by Krauss-Maffei Wegmann, baffled most observers. Many saw it merely as an attempt to maintain parity of status with Singapore and Malaysia, which also boast tank forces.

In some countries, politicians see defense spending as a way to buy off the military men with equipment and keep them out of politics, though this did not work for Thailand's recently deposed civilian Prime Minister Yingluck Shinawatra.

There is also an element of gearing up for neighborhood squabbles. Thai and Cambodian forces have clashed over territory around an ancient temple on their border. Indonesian and Malaysian patrol boats have faced off at a contested oil field off Kalimantan, not far from where Malaysian forces quelled a bizarre private invasion from the Philippines into Sabah State in 2013. Singapore is worried about the security of its water supply from neighboring Malaysia.

Southeast Asia has never been short of seething threats and rivalries to engage its military planners. The difference now is that its governments increasingly have the funds and suppliers to meet their demands.