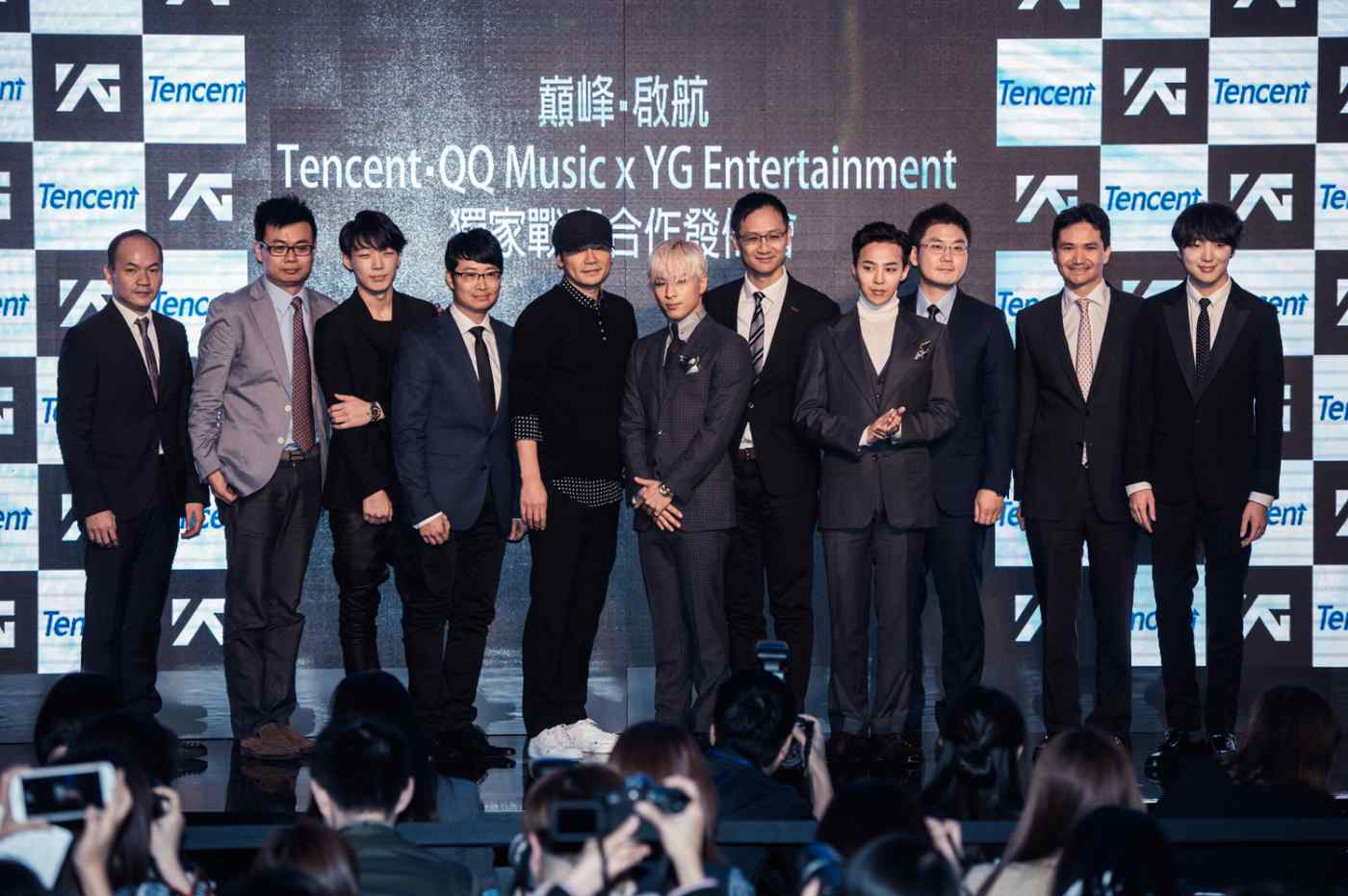 SEOUL/DALIAN, China -- South Korean entertainment continues to take Asia by storm, with the country's television shows, movies and music finding fans everywhere from China and Japan to Indonesia and Singapore.

This success has sown the seeds of competition: Countries and companies looking to grab a share of the pop culture spoils are taking a page from South Korea and launching their own creative blitzes.

The "Korean wave" began in the late 1990s, when South Korean TV dramas became smash hits in China and Taiwan. In Japan, the boom was kicked off by the "Winter Sonata" TV series.

The wave is still rising, winning the hearts and minds of a wide range of Asian consumers in a way reminiscent of Hollywood's global ascendance in the postwar era.

A recent survey by Japanese ad agency Hakuhodo shows the popularity of South Korean entertainment is soaring in major Asian cities such as Hong Kong, Taipei, Singapore, Manila and Jakarta. In Shanghai, South Korean music and TV shows have become more popular than rival offerings from the West, which has long been the leader in the global entertainment sector. 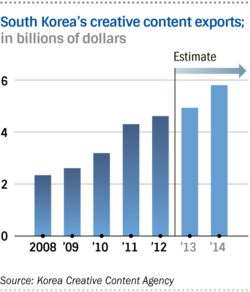 When it comes to entertainment, South Korea seems to know what audiences want. Many of its dramas feature intriguing, glamorous stories based on familiar themes, such as love triangles, romance between people of different backgrounds or family relationships. Musicians and pop stars put on dazzling performances that combine passionate singing, complex and flamboyant dance moves, and even amusing chitchat in foreign languages.

The country's public-private initiative to promote exports, launched in the aftermath of the 1997 Asian financial crisis, helped enhance the international competitiveness of the South Korean entertainment industry. Now, the Korean Wave is entering a new era of evolution driven by business innovations.

On the afternoon of Dec. 2, a press conference at a Hong Kong hotel signaled a new trend in Asia's entertainment landscape.

A handful of top and up-and-coming South Korean pop stars were present, including G-Dragon and Taeyang of the boy band Big Bang and the members of iKON, a new male group set to make its debut in 2015.

But reporters were more focused on an announcement by their talent agency, YG Entertainment.

The agency said it is partnering with Tencent Holdings, a leading Chinese media and Internet services company, on content distribution and production.

Under the agreement, music and videos by YG Entertainment's artists will be distributed through Tencent's QQ Music online content distribution platform. In 2015, the two companies will start working together to create and manage content for video websites and Internet broadcasters.

At the press conference, YG Entertainment CEO Yang Min-suk stressed the potential of the alliance to generate synergy, as it combines the content production power of YG, which entered the Chinese market two years ago, with Tencent's influential platforms.

Through the tie-up, YG -- whose roster of musicians also includes rapper Psy, known for his phenomenal hit "Gangnam Style," and four-member girl group 2NE1 -- will have access to powerful platforms to promote its offerings in a market of 1.3 billion consumers.

Tencent, for its part, will have the exclusive right to distribute YG's content in China. The two companies have also agreed to cooperate on protecting the copyrights of digital music in the country, which has earned a reputation for rampant counterfeiting and piracy.

YG plans to use the large variety of platforms operated by Tencent to promote its artists.

YG is not the only South Korean entertainment company to team up with an Internet giant in China. SM Entertainment joined forces with various Chinese partners, including video-sharing site Youku, through its subsidiary SM C&C to produce a show featuring pop group Super Junior traveling through South Korea with their Chinese fans. SM posted the program on Youku and aired it via a South Korean broadcaster. SM says it plans to produce more such programs in the coming years.

Hong Jeong-pyo, an analyst at Kiwoom Securities, says in China new media platforms like the Internet are growing as rapidly as TV broadcasting. SM's marketing strategy of focusing on program production is thus a wise move, according to Hong.

Both SM and YG, the two most successful entertainment houses in South Korea, make half of their group sales in overseas markets, the bulk of which comes from concerts in Japan.

While they currently depend on Japan and South Korea for most of their earnings, the popularity of South Korean entertainment is growing fast in other Asian markets, mainly through the Internet. The recent moves of the two companies indicate a shift in their strategic focus away from Japan, where the Korean Wave has lost some of its momentum and the country's performers have lost some of the limelight. 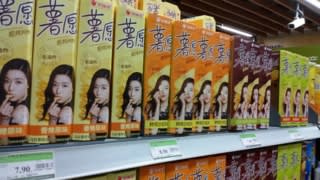 The figures say it all. The most popular TV Korean drama of 2014, "My Love From the Star," was watched a total of 2.8 billion times on Chinese streaming site iQIYI.com. The silver-sparkled Jimmy Choo high heels worn by lead actress Jun Ji-hyun, also known as Gianna Jun, in the second to fourth episodes disappeared from stores, not only in China and South Korea, but also in places like Dubai and London, where Chinese travelers sought them out. In April 2014, when Jimmy Choo opened its first store in Shenyang, northeast China, all 50 pairs of the $800 pumps sold out in almost no time.

It was a similar story for the Mondo backpack by Samsonite that lead actor Kim Soo-hyun carried over his shoulder as the show's handsome alien. Samsonite did not pay for a product placement. Kim reportedly decided to use the bag because he liked it. The backpack went on sale two days after the episode aired in January and sold out within a week.

Because Samsonite hadn't received any notice that Kim would be using the Mondo, they didn't have enough of the backpacks to keep up with demand, resulting in missed sales opportunities. "After seeing the tremendous demand for the product, we stepped up our production to speed up restocking," said Leo Suh, Samsonite's president for Asia-Pacific and the Middle East. "By having our marketing and merchandising teams work closely with our suppliers, we managed to reduce our lead time for the product from 60 days to 45 days," he told the Nikkei Asian Review.

When the Korea Trade-Investment Promotion Agency, or KOTRA, held a seminar for Korean restaurant chains in Dalian last fall, four of the nine companies that attended offered fried chicken. In "My Love From the Star," main character Song-yi, played by Jun, celebrated the first snowfall of the year with a meal of fried chicken and beer.

In Dalian, posters of a smiling Jun can be seen promoting Kentucky Fried Chicken, Paris Baguette bakeries, bags of potato chips and a local department store. She will soon be the face of Gucci.

The success of South Korean entertainment has opened doors for some of the country's other industries.

Many South Korean fashion and cosmetics retailers have been ramping up their earnings in Asia through sales promotions using South Korean actors and musicians who have become household names in the region, either through TV appearances or stage performances. These companies are now trying to refine and enhance this strategy by incorporating images of South Korean stars into all stages of their operations, from development to sales. A shopper at Moonshot's flagship store in central Seoul tries out some of the brand's cosmetics.

One example of YG's new fashion business strategy is its Moonshot cosmetics brand. The brand's flagship store, which opened on Oct. 22, is located in Samcheong-dong, central Seoul. On Dec. 16, the store was thronged with twentysomethings checking out rows of colorfully packaged lipsticks and eye shadows.

After they picked out products to try, a handsome young male makeup artist applied them to their faces so they could see the effect. Many looked happy with the results.

Moonshot-brand cosmetics are manufactured for the talent agency by a South Korean maker and sell at affordable prices of around 10,000 to 50,000 won ($9.06 to $45.31). The company also sells Moonshot products online.

Chinese shoppers account for 40-50% of the Samcheong-dong store's customers, according to Paik Ho-jin, an employee of the brand.

YG plans to open Moonshot stores in Singapore, Thailand, Malaysia and other Southeast Asian nations from spring to autumn this year.

The brand primarily offers edgy street fashions targeting shoppers in their teens and early 20s. Natural Nine doesn't have its own permanent stores and instead sells its products through other retailers.

Nonagon clothes quickly sold out at the brand's pop-up stores in Italy's 10 Corso Como shops in Milan, Seoul and Shanghai, as well as at the Galleria Department Store in the South Korean capital. Currently, Nonagon clothes are sold through online shop Beakerstore. Natural Nine also plans to open a new pop-up store at JayCo in Taiwan.

Cheil is considering expanding the brand into countries and regions where South Korean entertainment is popular, such as Southeast Asia and Latin America, through online sales.

Promotional videos for the brand are already on YouTube, featuring YG artists such as Big Bang's Taeyang and iKON's Bobby. Foreigners account for more than 30% of the shoppers who have bought Nonagon clothes in South Korea, a sign of the brand's potential in overseas markets. Natural Nine is aiming for annual sales of 100 billion won by 2017.

The growth potential of YG's brand business has grabbed the attention of French fashion conglomerate LVMH Moet Hennessy. An investment fund affiliated with LVMH has poured $80 million into the company, becoming the second-largest shareholder following the founder, Yang Hyun-suk.

Choi Seok-won, an analyst at Shinhan Investment Corp., said the investment will allow YG to take advantage of the variety of sales channels owned by the LVMH Group across the globe.