BEIJING -- China says it will establish three more pilot economic zones that will enjoy freer trade and investment controls to go along with the existing zone launched in Shanghai in September 2013. The move could affect foreign businesses' decisions over where to locate in the country.

Under plans drafted by the State Council and approved by the National People's Congress on Dec. 28, the three new zones will be created in the southeastern provinces of Fujian and Guangdong and in the northern port city of Tianjin. 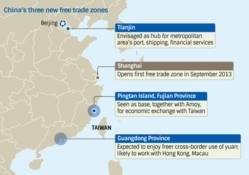 While the government did not specify exact locations, the Fujian zone is widely expected to be centered on Pingtan Island, China's closest point to Taiwan and a pioneer in promoting closer cross-strait business ties.

"The mainland market is big enough to take in more of Taiwan's goods and entrepreneurs," Chinese President Xi Jinping was quoted as saying when he met with Taiwanese business leaders on Pingtan Island in November.

Xi's visit to the island came just days after he announced plans to promptly establish more free trade zones modeled after the one set up in Shanghai a year earlier.

Xi spent about 17 years in Fujian, beginning in 1985, serving as head of the province and in other capacities. He frequently visited Pingtan during that time.

Pingtan is only 126km from Hsinchu, a city known as Taiwan's Silicon Valley for its cluster of IT-related companies and factories, and the region had been designated for joint development by the mainland and Taiwan. Cross Strait Ferry, a regular high-speed ferry service jointly run by the two sides, connects Pingtan and Taiwanese cities.

Chipmakers and food-processing companies are among the Taiwanese businesses making inroads to Pingtan.

Gateway to the seas

One much-discussed idea is to combine Pingtan with such places as Amoy, on the mainland side of Fujian Province, into a single pilot zone. In addition to serving as an economic conduit to Taiwan, it would also become a gateway for the "Maritime Silk Road." 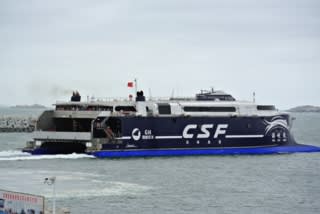 This road is a strategic concept designed to boost trade and secure energy by building a chain of China-friendly transport bases along the coasts of Southeast Asia and the Indian Ocean. Xi has pushed the idea in a series of summits with such island nations as Indonesia, Sri Lanka, the Maldives and, most recently, New Zealand.

The designation of Fujian Province as the site of a new free trade zone is thus expected to open the door for considerable infrastructure development in Pingtan.

Tianjin has one of the best ports in China and a long history of being a hotbed of private finance, including pawnbrokers. Chinese officials have suggested a free trade zone there would serve as center for coordinating economic development in the greater metropolitan area of Beijing, Tianjin and Hebei Province.

Guangdong Province, meanwhile, is expected to work with Hong Kong and Macao as part of the government's efforts to deepen their economic integration with the mainland.

Among foreign investors, expectations are high that regulations related to cross-border yuan transactions will be relaxed.

China places rigid controls on yuan trading by nonresidents outside the mainland. For example, foreign businesses sending yuan to Shanghai or Beijing for investment purposes must move the funds through specific clearinghouses approved by the People's Bank of China, the country's central bank. As a result, the bulk of international yuan transactions have passed through Hong Kong.

The Xi leadership remains hesitant to fully liberalize the Chinese currency to a level on par with the U.S. dollar or the Japanese yen due to concerns over the economic impact of a rapid outflow of speculative money. China will thus likely continue to relax regulations only in small steps as it seeks to raise the yuan's status in international finance.

In each pilot zone, the Chinese government intends to ease regulations "according to the area's local characteristics and needs." If, after a test period, certain measures are deemed applicable across the country, it is expected they will be implemented in other regions as well.

At the same time, it was also decided that the physical size of the free trade zone in Shanghai will be expanded.

In the existing zone there, rules have gradually been eased on such activities as international yuan trading and foreign companies setting up shop there. Taking advantage of the deregulation, Japanese trading house Itochu has decided to work with Thai conglomerate Charoen Pokphand Group to launch an Internet shopping business based there.

Even so, many foreign companies have expressed disappointment about strong resistance from central government bureaucrats who have vested interests. "The pace of deregulation [in the Shanghai zone] has been much slower than expected," a senior executive at a Japanese bank said.

Xi faces the challenge of not just creating more special trade zones, but carrying out bold deregulation that will actually make it easier to do business in China.