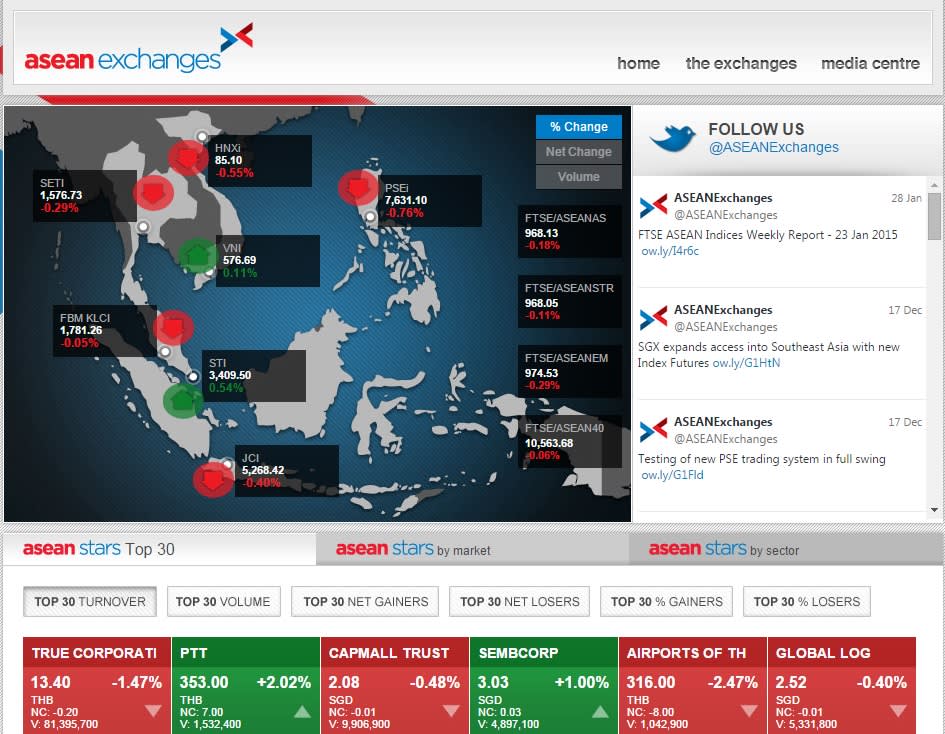 The Association of Southeast Asian Nations has set the goal of launching the ASEAN Economic Community (AEC) by the end of 2015, and is now pressing forward with moves toward market integration. Recently the adoption of a common time zone was discussed among foreign ministers at Kota Kinabalu, Malaysia, but integration of capital markets is more advanced. Seven securities exchanges in six of 10 ASEAN member nations launched the ASEAN Exchanges in April 2011 with the aim of enhancing collaboration among them. The seven exchanges are Bursa Malaysia, Hanoi Stock Exchange, Hochiminh Stock Exchange, Indonesia Stock Exchange, Philippine Stock Exchange, the Stock Exchange of Thailand and Singapore Exchange.

Looking to get a wide spectrum of domestic and foreign investors to recognize ASEAN as a new investable asset class, ASEAN Exchanges has been taking a variety of approaches, including the selection of 180 "ASEAN Stars" blue-chip stocks -- 30 each from the six nations.

At the center of ASEAN's initiative is ASEAN Trading Link, a business-to-business arrangement in which participating exchanges are interconnected through an electronic network for cross-border trading and order routing while each exchange maintains its independence. The scheme is attracting attention as the first step toward the integration of ASEAN capital markets. The link enables stockbrokers to directly deal in the shares of a country in which they do not have a trading license, as long as the country's exchange is a member.

When the link went into operation in September 2012, only Singapore Exchange and Bursa Malaysia were participants; the Stock Exchange of Thailand joined the following month. In 2014, Philippine Stock Exchange expressed its intention to participate but has not yet put the plan into action. As of January 2015, only three exchanges were interconnected via the link.

Although more than two years have passed since the start of ASEAN Trading Link, no statistics on the link have been released, so it is unknown how much it has boosted the share trading values of the member exchanges. Brokers in the three major ASEAN countries participating in the trading link had already handled transactions of stocks listed in other ASEAN countries, even before the link was launched, so investors cannot clearly identify what difference the link has made, if any.

For ASEAN Trading Link to enter the next phase toward realizing a single ASEAN capital market, it requires two things -- more countries participating and further improvement of the trading environment.

Behind ASEAN countries' poor participation in the link lies latitude given to the nations on the process and timeline toward the integration. The leeway has been provided in the light of a difference among the countries in their development stage and size of capital market, but it obstructs the progress of integration. More specifically, a country whose capital market is less mature prioritizes developing its own market and securing a competitive edge, tending to become cautious about joining the link.

Furthermore, if all exchanges of ASEAN members participate in the link, stocks of companies listed on one exchange will be allowed to be traded on any other. Therefore, there is concern that listings could be concentrated in a few highly liquid and reliable exchanges, such as Singapore Exchange, and as a result, some bourses could suffer sluggish growth in the number of listed companies.

Another concern is that some ASEAN countries are not members of ASEAN Exchanges. Cambodia and Laos, for example, have exchanges but only a limited number of listings (as of Jan. 27, there were two in Cambodia and four in Laos). Myanmar is still preparing to set up an exchange. These countries will be late in participating in the trading link.

Some progress has been made in improving the trading environment.

First, with the FTSE ASEAN Stars Index, a new asset class has been launched. Consisting of ASEAN Stars stocks (30 companies from each ASEAN exchange, except for Vietnam, where 15 companies will come from two exchanges), it will lay the groundwork for encouraging investors at home and abroad to invest in ASEAN as a single market. Four other FTSE ASEAN indexes -- All-Share Index, Sector Indices, 40 Index and All-Share ex Developed Index -- have also been introduced.

Second, moves are underway to streamline and standardize clearance and settlement of cross-border trading. Currently, this process is carried out in the country where the stock is listed. As a result, the use of the trading link does not reduce costs in the post-trading process. But at a meeting in April 2014, ASEAN Exchanges member CEOs decided to appoint Deutsche Bank to provide depository and clearing services, with a common depository and clearing house to be created in the future.

Third, related laws and regulations, which vary among countries, must be brought into line. The ASEAN Capital Markets Forum, which consists of ASEAN members' securities regulators, is making efforts in this area. For example, for the prospectus that a company has to draw up when it offers shares or other securities in multiple ASEAN countries, a scheme allowing the use of common standards -- ASEAN Disclosure Standards -- has been adopted; the three nations participating in the trading link having already introduced it. Previously, under the ASEAN and Plus Standards Scheme, a company was required to prepare two kinds of prospectuses -- one based on common disclosure standards and the other on additional standards reflecting individual countries' regulations. Accordingly, the ASEAN Disclosure Standards are a big step forward.

As a range of actions are being taken toward revamping the trading environment to promote the ASEAN Trading Link, a close eye should be kept on whether the effective integration of ASEAN capital markets will advance through the standardization of institutions and in other ways.