TOKYO -- In Southeast Asia, the image of the wealthy expat earning paychecks far fatter than those of local employees is deeply ingrained. It is also increasingly inaccurate. Today, many multinational companies are reserving their biggest salaries for locally hired managers and executives whose business fluency transcends borders.

Managers who are savvy about local business practices and also capable of seamlessly interacting with headquarters are a rare commodity. Competition among multinationals to retain such talent is hot. The salaries of these hires have risen 70% over the past five years at some Indonesian subsidiaries of Japanese companies, pushing up costs for those businesses. 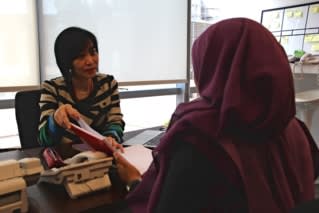 Leila Djawas, left, vice president of Pasona HR Indonesia, speaks with an employee in her office in Jakarta.

After graduating from a Japanese university, Djawas -- who is of Japanese and Indonesian heritage -- built up an impressive resume, working at a trading company, the Indonesian Embassy in Tokyo and the Indonesian Ministry of Trade in Jakarta. Pasona HR Indonesia, a subsidiary of major Japanese staffing company Pasona Group, hired Djawas as a vice president in March last year, impressed with her extensive contacts with Indonesian public officials.

According to Mercer Japan, the Japanese unit of the U.S. personnel consultancy, average annual executive compensation in Indonesia is about 30 million yen ($250,000), including fringe benefits. That is more than in Japan, where the figure is slightly above 20 million yen. Pasona would not disclose Djawas' salary, but Hiroshige Sadamatsu, president of Pasona HR Indonesia, said, "Considering the importance of her job, her compensation is naturally high."

The company has high hopes for Djawas. Her tasks include helping Japanese companies set up local units and finding the staff to run them. This requires expertise on business and legal regulations. It is here, said Sadamatsu, where Djawas' strong connections with government officials are so valuable. "The information Japanese obtain tends to be outdated," he said.

Last year, a chain of high-profile defections shook the Indonesian banking sector. A leading Japanese bank with operations in Indonesia hired a local executive away from a Singaporean bank. The Singaporean bank then snatched a local senior official from a U.K. bank, where he headed marketing, along with some of his subordinates.

When executives move to another bank, they typically bring subordinates and customers with them, inflicting serious damage on their former employers. To avoid being stung this way, banks in Indonesia generally offer pay increases of 50-100% to executives that are approached by another bank, said an official at the Indonesian branch of a Japanese bank.

The president of a Japanese energy-related company operating in Thailand complained that, "Our local employees often leave us to work for Western companies." To retain its local hires, the company provides chauffeur services for both its Thai and Japanese executives. It pays one of its local executives, a man in his 40s, about 280,000 baht ($8,350) a month, more than his Japanese counterparts make.

For foreign companies, setting up shop in Southeast Asia is no longer a guaranteed way to save money. A corporate survey by the Japan External Trade Organization on annual compensation burdens, including basic salaries and fringe benefits, shows that a section chief at a nonmanufacturing company in Jakarta earned $21,282 in 2014, up 70% from five years earlier.

The scheduled creation later this year of the ASEAN Economic Community is expected to liberalize the movement of highly skilled people within the trade bloc. Should that happen, cross-border competition for capable executives and engineers will only intensify. Wages are also likely to keep climbing.

Nikkei staff writers Tamaki Kyozuka in Bangkok and Tetsuya Abe in Beijing contributed to this article.