A year ago, the price per bitcoin was in free fall and the People's Bank of China warned financial institutions and payment companies against using the cryptocurrency. The future looked murky. 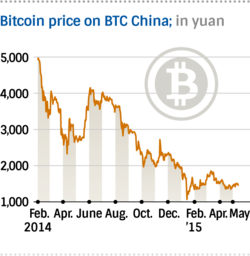 Traders in March, however, bought and sold roughly 700 million yuan ($112 million) worth of bitcoin a day, according to website Bitcoinity. The record-level trading is more than double the volumes logged around a year ago.

China's central bank in late 2013 said financial and payment institutions were not allowed to conduct any sort of business using bitcoin. The bank's statement also said bitcoin did not have the same legal status as a currency. The central bank's moves essentially separated bitcoin from the mainstream financial industry. The PBOC, however, did not ban individuals from using and trading in bitcoin.

Bitcoin is a cryptocurrency -- digital and decentralized, it relies on distributed computing power to clear and authenticate transactions. These transactions can be completed cheaply, immediately and without the need for escrow from a trusted third party such as a government, legal office or banking federation.

So far, however, payment transactions have represented a tiny part of bitcoin trading volumes. Activity is dominated by speculators. "We've had tractions and are getting more merchants to sign up, but even if payments grow 10,000% it will still be a drop in the bucket compared to exchange-traded products," said Lee.

Since 2014, local and international bitcoin exchanges have been luring Chinese investors with new ways for trading the cryptocurrency.

"Bitcoin came along and it just seemed like something completely new and fresh," said Matthew Ventura, a bitcoin speculator who operates five bitcoin ATMs in Macau. "I decided to give it a try and it's been very fun. It's exciting."

A gradual erosion of trading fees started in 2013 when BTC China scrapped its 0.3% commission. At the time, most exchanges were charging anywhere from 0.6% to 0.2% to swap bitcoin and yuan. Other exchanges followed BTC China's lead.

OKCoin, one of the most popular futures platforms, offers margin loans of up to twice a trader's account size and futures contracts with leverage of 10 or 20 times for a fee of 0.03%. Others offer near-identical terms.

All this has worked. China's interest in bitcoin has surged. That is despite the digital currency sinking from a peak of more than $1,100 in November 2013 to $230 today. Yuan values for bitcoin roughly correspond to those for dollars.

Worries about the future of bitcoin have subsided. "Trading volumes have risen over the past year, mostly due to the confidence that bitcoin is here to stay," said Lee. 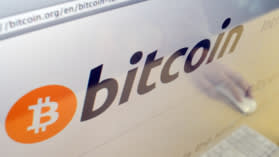 "Bitcoin is not a hot topic within the Chinese government right now," said Roland Sun, a partner at Shanghai law firm Broad & Bright who specializes in cryptocurrencies. "They acted in 2013 because there was a lot of volatility and it was high profile, but there are no indications that the government is going to take any further action on bitcoin. Government officials aren't very familiar with cryptocurrencies and would rather wait to see what the U.S. does."

The New York Department of Financial Services last July proposed a framework known as BitLicense that focuses on consumer protection, money laundering and cybersecurity rules for cryptocurrency businesses. It could form the basis of a bitcoin regulatory framework in the future.

Wall Street appears to think so. Goldman Sachs has published two lengthy reports on bitcoin, focusing on its usefulness as a payment protocol. The investment bank and IDG Capital Partners also in April led a $50 million investment in a U.S. bitcoin startup, Circle Internet Financial.

That, however, does not mean cryptocurrencies are about to go mainstream. The bitcoin market is tiny in comparison to conventional asset classes. The net buying quota available through Stock Connect, a trading link between the Shanghai and Hong Kong stock exchanges, is 10.5 billion yuan a day, much higher than the amount traded in bitcoin.

The small size of the bitcoin market and the potential of cryptocurrencies as legitimate financial tools appear to have pacified Chinese regulators for now.