TOKYO -- Private-sector foreign exchange traders caught their collective breath in shock as they heard the words, "The yen could weaken to 130 by the end of the year," at an unofficial meeting with Japanese government officials in Tokyo in mid-May. 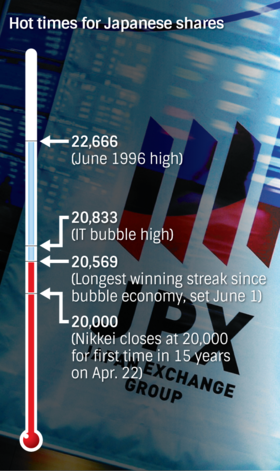 The remark contrasted starkly with what authorities often repeated before nationwide local elections in April -- that excessive depreciation of the yen works against the Japanese economy. Hiroshi Sudo, director and general manager at Central Tanshi FX, said he felt a shift in the government stance toward tolerating a weak yen. This would push up share and commodity prices if the decrease is moderate.

The yen's decline was given a push by U.S. Federal Reserve Chair Janet Yellen's May 22 comment: "I think it will be appropriate at some point this year to take the initial step to raise the federal funds rate target." Masahiro Ichikawa of Sumitomo Mitsui Asset Management said the market understood Yellen's remark to mean it is a near certainty that the U.S. will raise key rates by the end of the year.

The yen-dollar market, which had stalled until then, saw the yen plummet on expectations of widening interest rate differences between Japan and the U.S. The yen easily broke through pre-Lehman Shock levels, briefly hitting a 12.5-year low of just above 125 on June 2. Meanwhile, the Nikkei Stock Average climbed for 12 consecutive days through June 1, the longest winning streak since the bubble economy of the late 1980s. The 20,833 mark, a high recorded during the information technology bubble in 2000, now seems in sight.

Speculation is rife that the yen could fall to 128 or 130. On the futures market, call options -- the right to buy the dollar at a certain yen exchange rate for a certain period -- have been heavily bought. The yen's weakening and the stock market rise have entered a new stage, according to analysts.

Overseas investors are seeing a new horizon. "Western value funds handling long-term investment are moving to buy Japanese cash stocks, a phenomenon unseen for years," observed Yukio Ikehata of Daiwa Securities.  Net buying of Japanese shares by foreign investors exceeded 2 trillion yen ($16.1 billion) in about five months from the beginning of the year to late May.

If the Nikkei average surpasses the level seen in 2000, the next psychologically important milestone would be 22,666, reached in 1996. Some market professionals predict the index will reach the next level toward the end of the year.

The appetite for Japanese shares has spread to individual investors outside of Japan, including other Asian countries and Europe. In Bangkok, people lined up in front of a financial institution to buy into a trigger fund, which invests in Japanese small- and mid-cap shares.

All shares in the 500 million baht ($14.8 million) trigger fund sold out in seven minutes. An executive at the company managing the fund said, "The perception is widespread that Japanese shares will rise."

Leading Italian bank Fineco recently held a seminar in Tokyo with more than 100 of its financial advisers. They listened to an official from FIL Investments (Japan) answer questions about Abenomics to determine whether to recommend Japanese stock funds to investors. "An increasing number of European pension funds are expanding the proportion of Japanese stocks in their portfolios," Fidelity's Hisae Toews said.

With a new focus on equity returns, expectations are that companies in Japan achieve more profit growth than their U.S. counterparts. With Japanese shares traded at 16-17 times underlying earnings per share, they are undervalued compared with U.S. shares, which have price-earning ratios around 20. The market is paying more attention to Japanese shares, but are there blind spots?

Will the yen's weakening, which has helped the stock market rise, begin to exert a negative impact, such as increased import costs, on broader areas? Does the stock market surge reflect the true strength of Japan's shares? In fact, individuals have already begun selling shareholdings to lock in profits. Is the Japanese stock market overheating? Investors need to think carefully about the record-breaking weakness of the yen and rising shares.