The rise of LDP's 'Joan of Arc'

TOKYO -- Tomomi Inada, an up-and-coming lawmaker in Japan's ruling Liberal Democratic Party, is quickly emerging as a formidable political figure in what remains one of the world's most male-dominated democracies.

The rise of Inada, currently the LDP's policy chief, is being propelled by the steadfast backing of Abe, who has said that her conservative political credo matches his own. He pushed Inada as an LDP candidate for Fukui Prefecture for the 2005 national election. Since then, she has been elected to the Diet four times.

But it was not just her right-leaning outlook that attracted Abe. A former lawyer, Inada is remarkable for her power to out-debate political foes with lucid logic and a sharp tongue.

During a discussion aired live June 21 by national broadcaster NHK, she had a stormy argument over the controversial national security legislation currently being debated in parliament with Goshi Hosono, policy chief of the opposition Democratic Party of Japan.

Hosono, a seasoned polemicist, urged the ruling bloc to respect criticism of the security bills by legal experts. Days earlier, Yasuo Hasebe, a professor at Waseda University, upset LDP lawmakers by telling the Diet that the proposed law, which would allow Japan's military to defend allies, is unconstitutional -- despite Hasebe being one of the witnesses picked by the party.

"The LDP should heed the opinion of one of Japan's foremost constitutional experts," Hosono said.

Inada countered: "One of Japan's foremost constitutional experts, Nobuyoshi Ashibe, wrote that the Self-Defense Forces are unconstitutional in 'Constitution,' widely seen as the best textbook on the nation's supreme law." Hasebe is known to ascribe to Ashibe's views.

"So you think the SDF is unconstitutional?" she asked.

When Abe formed his second government in 2012, he hand-picked Inada to serve as administrative reform minister. She quickly made her mark after a series of heated debates with bureaucrats at the government's Council for Regulatory Reform, often staunchly defending old rules and regulations.

"Her political caliber had not be tested yet," a private-sector member of the council said. "I was very impressed by her performance."

Inada, 56, is as inventive in promoting her constituency as she is her image. She wears a variety of eyeglasses despite having good eyesight, and walks the corridors of the Diet building in eye-catching stockings. Fukui Prefecture is known for its production of glasses and stockings.

The minister says she wears them in public to increase global exposure of Japan's manufacturing prowess. But it is also a chance to plug her home prefecture's local industries.

Another trait that stands out is Inada's openness to new ideas despite her conservative political views. She values tradition and visits the war-linked Yasukuni Shrine in Tokyo every year. But she has made a point of trying to grasp the circumstances of young people through her exchanges with young intellectuals.

Until recently, Inada was widely regarded as just another follower of Abe. The prime minister has been making decisions on key economic policies -- notably, raising the consumption tax to 8% and delaying an additional increase to 10% -- without consulting the LDP's Policy Research Council, which she heads. So when Abe appointed Inada as head of the council in September 2014, many thought her role would be limited to a liaison between the prime minister and the party.

But she has shown a willingness to make her voice heard. Inada recently grabbed the spotlight by clashing with Minister for Economic and Fiscal Policy Akira Amari over one of the most important economic policy issues facing Japan: how to put its fiscal house in order.

When Abe announced in November the postponement of the planned second tax hike, he sought to dispel market concerns about a future fiscal crisis by pledging that he would present a credible blueprint on how to reduce Japan's mountain of public debt by this summer.

In February, Inada set up a special panel on fiscal reconstruction in the LDP's Policy Research Council.

After Abe ruled out the possibility -- for now -- of raising the sales tax beyond 10%, the Council on Economic and Fiscal Policy, a policymaking body essentially led by Amari, began promoting an idea that bets on high economic growth and thus a major increase in tax revenues. The implication was that deep spending cuts would not be necessary to achieve Japan's stated goal of bringing its primary budget -- excluding new bond sales and debt servicing -- to a surplus by fiscal 2020.

Inada staunchly opposed this. "We should not write a fairy tale where we count on economic growth that may or may not come, and pray to God, 'Deliver us a budget surplus," she argued. "We should not make social security a sacred cow exempt from spending reform." 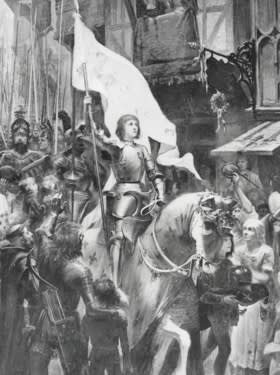 Abe has compared Inada to Joan of Arc, the patriotic 15th-century French girl who believed that God had chosen her to lead the country to victory in its Hundred Years' War with England.

Joan of Arc wore men's clothing in battle and boosted the morale of her fellow soldiers. Abe appears to hope that Inada will provide a similar boost for the LDP and the country.

In making the comparison, however, Abe may also be suggesting that he sees a trace of vulnerability in Inada. The French heroine almost saved France from the brink of defeat, only to be captured and executed by the English. Perhaps Abe fears Inada will, in the political sense, suffer the same fate as Joan of Arc -- a woman so brave she is willing to go deep into enemy territory and give her life for the cause she believes in.

But she may be more savvy than Abe realizes. In her push to curb spending, Inada did not carry the banner. She appointed Taro Kono, head of the LDP's Administrative Reform Promotion Headquarters, as the front man for making spending reform plans.

Kono is a strong proponent of phasing out nuclear power, setting him apart in the largely pro-nuclear LDP. But he has maintained close ties with senior party officials, including Finance Minister Taro Aso and Chief Cabinet Secretary Yoshihide Suga.

Kono spearheaded the drafting of the outline for the expenditure review plans. It calls for limiting increases in social security-related expenses to around 500 billion yen ($4.1 billion) per year and keeping the growth of other spending items almost level.

Inada has also demonstrated a knack for winning opponents over, rather than talking them down, when such a strategy appears more likely to work.

She welcomed even people wary of quickly improving fiscal health into the special panel. They include Shoji Nishida, a proponent of big government, and Kozo Yamamoto, a supporter of reflationary policy through further monetary easing. Inada made a calculated judgment that, once on board, these opponents would not dare scrap the hard-earned consensus at the 11th hour.

Inada's panel managed to persuade LDP lawmakers with vested interests in the medical and welfare sectors to back the program to curb spending. It was a rare moment in which the pork barrel-prone LDP was calling for a slimmer budget.

At a news conference on June 18, Inada questioned the legal basis of the Tokyo tribunal that convicted Japanese military and political leaders of war crimes.

"I have no intention of saying the tribunal was invalid," she said. "But I do believe [the judges'] understanding of history, cited in the ruling, was so sloppy that we need to properly examine" the facts laid out in their ruling.

"We have received suggestions that a thorough investigation be made into what happened during the Occupation until the San Francisco Peace Treaty, including how the current constitution was drawn up," she said.

Inada announced plans to set up a new body within the LDP that is tasked with reviewing occupation policies adopted by the Allied powers, as well as how Japan's constitution was written.

When asked about her ambitions for the premier's job, Inada said: "I am aware that this will be taken as showing I have a desire to take the post, but I think every politician aspires to be prime minister."