State of the Arctic reflected in thinning ice

TOKYO -- The disappearance of ice in the Arctic -- a result of global warming -- is picking up steam. Scientists are now concerned that the diminishing ice pack could accelerate climate change. It is difficult to accurately grasp what is occurring in the polar region, but with data piling up from satellites, observation ships and studies on foot, how the ice is melting and the impact of this change are becoming clear. Recent research should help boost the accuracy of predictions about the course of global warming. 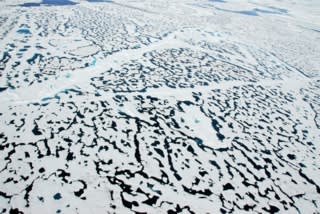 The decline of ice in the Arctic Ocean and Greenland has become especially striking in the last decade or so. The thickness and area of permafrost in the polar region are on a downward trend as well. As global warming progresses, there are fears that the rate of decline will speed up.

Japanese researchers are among those working to shed light on the actual state of and mechanism behind the melting, a field of study that is filled with mystery.

"Do you know what this is?" Tokyo University of Marine Science and Technology associate professor Koji Shimada displayed an aerial photo he took last year. Innumerable black shapes can be seen against the white Arctic pack ice. They are so-called melt ponds -- small pools of water that have accumulated in depressions on the ice's surface. These bodies of water typically measure 20-30 meters across.

What stands out are melt ponds that have formed on thin ice that has been frozen for only about a year. The surface of each pond is warmed by sunlight, and the ice in contact with the water starts to melt. As time passes, the ponds become larger and the ice becomes thinner, allowing holes to form in the ice or for it to collapse under pressure from natural forces such as wind. When this happens, the water's surface area increases, causing the water temperature to increase and more ice to melt. The repetition of this accelerates both the decline in the ice volume and the increase in temperature. The phenomenon is known as "ice-albedo feedback."

In the Arctic Ocean, it has become difficult to find thick ice that does not melt in the summer. One cause of this is the large amount of heat carried in warm ocean currents from the south. The overlapping of meteorological and other phenomena causes the ice as a whole to rotate in a clockwise direction, moving the ocean's surface with it and apparently pulling in the warm ocean currents from the south.

The accumulated heat "warms the ice from the bottom, like floor heating in a home," Shimada explained. The effects of this appear very gradually and over three or four years the ice's surface area diminishes. Observation data indicates that the amount of latent heat in the ocean increased particularly around 2009. The ice's surface area bottomed out three years later in 2012 and at present is growing moderately. The leading edge of a glacier in Greenland. This is where icebergs form as they break off and fall into the sea. (Courtesy of Hokkaido University associate professor Shin Sugiyama )

Ice is rapidly disappearing in Greenland as well. There are reports that some 229 billion tons was lost on average each year from 2005 to 2010, raising sea level by around 0.6mm a year. If the entire mass were to melt, sea level would likely rise some 7 meters.

Hokkaido University associate professor Shin Sugiyama has been able to clarify one part of the mechanism behind the acceleration in the ice's disappearance. What Sugiyama focused on were "calving glaciers" -- glaciers whose tips stick out over the ocean and break off, forming icebergs.

The flow of glaciers sped up in the early part of this century, and the tips retreated rapidly. The glacial exodus is thought to account for around half of the decline in Greenland's ice.

Sugiyama and his team spent 2013 and 2014 studying the speed of a calving glacier and its surrounding topography in the Kanak region of northwestern Greenland. As a result, they discovered that bedrock protrudes from the seafloor a short distance in front of the glacier's leading edge.

At the Bowdoin Glacier, which has been the focus of the group's observations, the leading edge began floating around 2008 and collapsed significantly after that. The jam broke off and the glacier's speed more than doubled, reaching some 500 meters a year. The tip successively broke off and formed icebergs, and even now the retreat continues. A similar phenomenon has been observed in southern Greenland as well.

However, when the end no longer reaches the ocean, the effects of seawater will disappear and the retreat could temporarily settle down. Some observers also point out that if the ice melts and large volumes of fresh water flow into the Atlantic Ocean, the ocean currents could change and the seawater temperature may drop, slowing the melting of the ice. The increase in temperatures in the polar region is also causing permafrost to melt. Hokkaido University professor Atsuko Sugimoto, who has been studying the permafrost of eastern Siberia for around 20 years, described the effects of unprecedented heavy rains in the region she was studying in 2007 and 2011. The permafrost melted, causing the ground to collapse in places. Ponds formed in the resulting depressions, trees rotted, and in some places emissions of methane -- which has a strong greenhouse effect -- increased.

As the climate warms, the grassy areas of the northern taiga zone are starting to expand. As the forests and grasslands increase in extent, the reflection of sunlight diminishes, causing the ground to warm further, accelerating climate change. On the other hand, absorption of another warming gas, carbon dioxide, which is used in photosynthesis, may rise as well.

The United Nations' Intergovernmental Panel on Climate Change has noted that making predictions about global warming is difficult, citing the melting of polar ice and the difficulty in assessing its effects as factors. The accumulated results of observations and analysis of the Arctic region by Japanese researchers could end up being reflected in future predictions.