PHNOM PENH -- In Cambodia, where one often hears that "cash is king," sending money around the country used to be a risky business. Until just a few years ago, most money was sent by road, where it could be lost or stolen -- or take days to reach its destination. 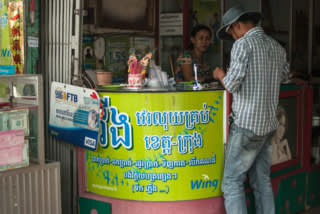 These days, transactions can be made quickly and securely, at the push of a button. "It's very fast. You just put the money here and send a code to your receiver and they get it immediately," said Sour Sokchhay, 36, who acts as an agent for Wing (Cambodia), Cambodia's leading mobile payments company.

A lot of money flows through Sokchhay's photography shop in Phnom Penh. He processes between 100 and 200 transactions a day for Wing, serving a steady stream of customers. "People don't trust banks. That's why they still keep their money in their house or in their pockets," he said. "But they trust Wing."

In a predominantly cash-based economy, Wing's business model is simple: For a fee of 6,000 Cambodian riel ($1.47) the company lets account holders transfer money and pay bills, in either dollars or riel, via their mobile phones. Those without Wing accounts can also send and receive money through the company's network of 2,500 cash express points like the one in Sokchhay's shop.

"A Wing money transfer is instantaneous," said Anthony Perkins, Wing's CEO. "So you can get money from one end of the country to another straight away."

Wing was launched in 2009 as a subsidiary of Australia's ANZ Banking Group, but the company was slow to find its feet. In 2011, it was sold by ANZ, which said it wanted to focus on corporate and high-end consumer banking.

Now owned by Cambodian conglomerate Royal Group, Wing has since hit on the right formula. It has nearly 600,000 registered accounts, and its bright-green signs have become a familiar sight to Cambodia's 15 million people. The company handles about 8 million transactions each month between all the country's provinces, according to Perkins. "There are flows going everywhere," he said. A Wing agent in Phnom Penh holds up an account card used for making deposits and withdrawals at Wing outlets.   © Sebastian Strangio

Like other Cambodian financial institutions, Wing has struggled to overcome a deep public mistrust of banks. "People are worried about their savings, so some still keep money at home, or under the mattress," said In Channy, president of Acleda Bank, whose own mobile payments service, Acleda Unity, now serves some 160,000 customers.

But Channy said the public mindset is changing. Statistics from the National Bank of Cambodia, the central bank, show that the ratio of bank deposits to gross domestic product more than doubled from 2009 to 2014 to nearly 60%. The ratio of credit to GDP grew by a similar amount over the same period.

Even so, large banks are still mostly seen as something for the rich. In late 2013, the World Bank reported that fewer than 5% of Cambodians had bank accounts. One advantage for Wing is that its third-party agents -- often local shop owners like Sokchhay -- are much more accessible and approachable than bank branches. "The Wing experience is in the street. [The agent] is a normal vendor that might be someone's next-door neighbor or someone in their community," Perkins said. "So their confidence to put their money there increases."

In 2013, Wing turned a profit for the first time, and the total value of its transactions topped $1 billion. The current figure is confidential, but Stephen Higgins, former chief executive of ANZ Royal Bank, said the volume of payment flows now exceeds that of most Cambodian banks.

Wing has expanded its services beyond money transfers: Its users can now pay bills, manage credit cards and make loan payments. The next frontier is international transactions. In March, Wing struck a deal with Thailand's Kasikornbank to offer cross-border transfers for the hundreds of thousands of Cambodian migrant workers living in Thailand. Perkins said Wing's aim was to act as "the glue between other financial institutions" and as a central point for various transactions.

Though Wing has established itself as the market leader in mobile payments, other players are emerging. Channy said Acleda Unity hopes to launch its own network of third-party agents as soon as it gets approval from the central bank. Metfone, a dominant local telecommunications operator owned by Vietnam's Viettel, launched its EMoney service earlier this year via a similar network of third-party agents. It offers transfers at half the prices charged by Wing.

The extension of payments services to outlying areas could be crucial in developing the lagging rural economy. "The biggest benefit is bringing lower-cost cash transfers to people in those rural areas," Higgins said. "It's putting more money in the hands of the poor."