For Thein Sein, the end is the beginning 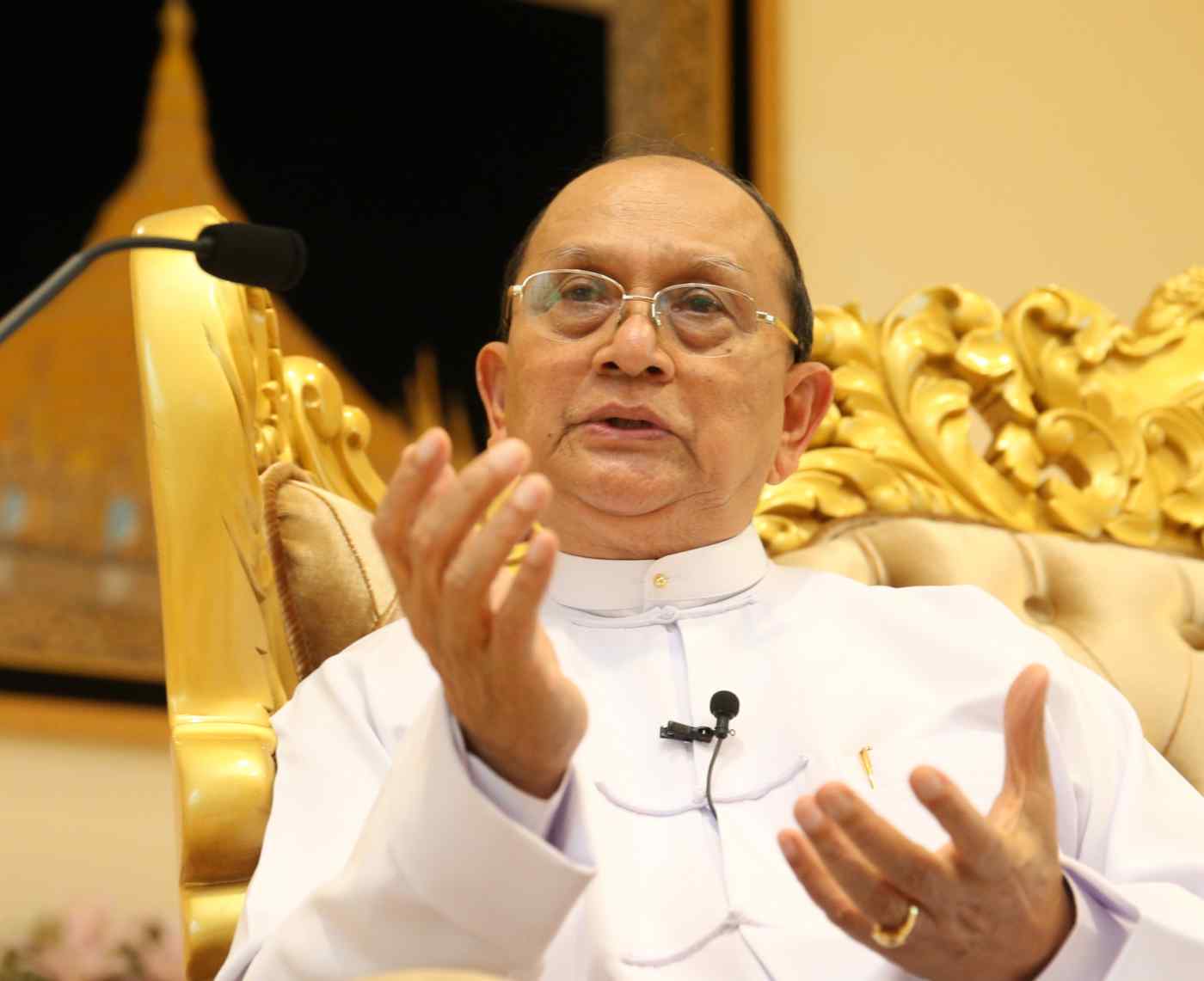 NAYPYITAW -- When he welcomes visitors to the sumptuous presidential palace in Myanmar's capital, Naypyitaw, these days, President Thein Sein exudes the determination of a leader just starting -- rather than ending -- his five-year term.

In a wide-ranging interview on July 29, he outlined priorities for further economic, social and political reforms that would easily take eight years to implement -- rather than the eight months he has remaining in office. In rare open criticism of moves by political rivals, he also alluded to an intensifying struggle within the ruling Union Solidarity and Development Party, and a deepening rift between the executive and legislative branches.

The scene was slightly surreal as the bespectacled former general, clad in a traditional longyi sarong and sandals, perched on an enormous faux-Rococo sofa beneath a crystal chandelier. His message, however, featured stark admissions of shortcomings in his reform program and high hopes for transforming the country's fledgling industrial sector. Much had been achieved in the last four years but far more remained to be done -- on almost every front, he noted.

The likely conclusion of an elusive cease-fire pact with ethnic armed groups in coming days could open a new phase in the country's convoluted peace process ahead of the Nov. 8 national poll, he predicted. "Both sides have a strong desire to sign the nationwide cease-fire agreement before the elections. ... This would be a significant achievement," he said.

On the economic front, he readily acknowledged his government's failure to reach ambitious targets to slash poverty levels and boost average income. But moves to develop tourism have exceeded expectations, he noted, taking the country to more than 5 million visitor arrivals this year from less than 800,000 in 2010.

The president's aims are as lofty as they were at the start of his term, but the agenda has matured, reflecting how far Myanmar has come in that time. Beyond just kick-starting industry and creating jobs, he noted, it was now essential to move the country up the value-added chain, make more credit available and boost small and midsize companies. New investment from countries like Japan, notably Tokyo's recent decision to join the Dawei special economic zone and deep sea port project in southern Myanmar, have boosted momentum, but much more was needed, he added.

In a similarly sweeping interview three years ago, the then-neophyte president made no mention of policy failures or legacy. Today a more confident Thein Sein asserted: "One of the most significant achievements is that we have been able to change military government to a democratic, elected government without bloodshed and in a peaceful and stable manner. ... I believe this is a tangible and significant achievement [and] this will be our legacy in the history of Myanmar." With his bookish, understated air, it is hard to imagine that Thein Sein has presided over one of the most remarkable transitions in recent history. It is also difficult to believe that for decades, he was an army officer serving in conflict zones throughout Myanmar's extensive ethnic borderlands. He joined the military junta headed by then-dictator Senior Gen. Than Shwe, who eventually chose him to lead the military-backed USDP to victory in a largely one-sided election in 2010. The poll, boycotted by then-democracy activist Aung San Suu Kyi and her National League for Democracy, was initially criticized but later accepted by Western countries.

After the third and final release of Suu Kyi from house arrest in late 2011, global leaders, including U.S. President Barack Obama, commended Thein Sein for his reforms but urged greater and faster liberalization.

Since then, the president has pushed an ambitious agenda, overseeing a near doubling of Myanmar's economy, with 8%-plus annual growth expected this year, and a surge of foreign investment reaching an unprecedented $8 billion worth of approved projects in 2014-2015.  On the political front, his administration has restored key personal freedoms, lifted censorship and released more than 2,000 political prisoners.

There have been black marks too, including vicious bouts of sectarian violence driven by ultra-nationalist Buddhist movements and the steady exodus of the country's minority Muslim Rohingya in rickety boats off the western Myanmar coast. Among other developments, security forces have sometimes brutally suppressed activists protesting labor, education and land rights issues. These missteps have triggered criticism in Myanmar's overactive social media of "backsliding" and policy paralysis.

Thein Sein firmly rejected such accusations, with emphatic claims that reforms would continue. "I don't agree that reforms in our country are backsliding or stalled," he said, adding: "I should say Myanmar is relying on foreign investment in our economy; we need it to create jobs and move up the value-added production chain."

Three years ago, his economic goals were too distant to declare failure. Now he readily acknowledges the shortfall in ambitious earlier pledges to slash poverty levels (to 16% from the 26% estimated in 2010) and boost per capita income (to $3,000 or more from under $800). Repeating a familiar mantra, he said further investment was key to realizing such aims.

With the resolve of a new leader with a pressing agenda, he pledged the doubling of efforts to improve basic infrastructure and services such as a stable power supply. "We need infrastructure such as reliable supplies of electricity and technological know-how. In this respect, to cope with the shortages we are closing working with other countries, including Japan."

On the personal front there are more admissions. Thein Sein shows little sign of fatigue from recent years of reform and troubleshooting. Yet he highlighted his age and health issues (he is 70 and uses a pacemaker), saying he wanted to pass the baton to a new generation of leaders. But in a country run by generals for decades, there are relatively few potential leaders with direct experience of the politics of leading a government, he noted. "Based on the country's situation ... and the people's desire, I will have to seriously consider their wishes.

"We are still in the learning process. ... If our democratic experiences are natural, I am sure the role of our military in politics, as well as in parliament, will be gradually reduced," he said.

In domestic politics, Thein Sein faces a tricky balancing act between forces of reform and conservatism -- not least within his own party, the USDP. The latest issue, highlighting a growing challenge to his authority by the influential Parliamentary Speaker Shwe Mann, was a proposed law to prevent members of the executive branch from running under a party banner.

The provision, to be considered soon by a combined parliamentary session, is likely to fail, say observers. Even so, it has been portrayed as a declaration of war between the USDP's competing factions.

In an uncharacteristically strong response, Thein Sein criticized the provision but said it would not block him from a potential second term, as the president was not required to be an elected politician. "Under our constitution, every citizen has the right to vote and every citizen has the right to run [for elected office]. So this is quite unusual and I believe no one will be happy with this ... ."

He indirectly confirmed speculation that some of his closest ministers will run as independents, adding: "Whether they run in the election depends on individual choice. If barred from running under a party, they can still contest as individuals."

Asked about the best moments of his presidency, he volunteered some unlikely answers. "When I visit poor rural areas and see people with mobile phones taking photographs or talking to loved ones, I think about the impact of our telecommunications reforms -- how ordinary people can now afford phones -- that is a happy moment for me."

Another one, he said, was the liberalization of previously sky-high tariffs on imported cars. "I know traffic in Yangon and other cities is a problem. But cars were out of reach for most people; now many more can afford them," he said.

Beyond questions about his own role, Thein Sein has an immediate goal: overseeing a credible election. "More important than whether I am president or become next president is my aim to hold the elections in a free and fair manner -- and to see peace and stability in the post-elections period," he said. "That is more important than running for president. And that is what is foremost in my mind."

See video of the interview at http://video.asia.nikkei.com/