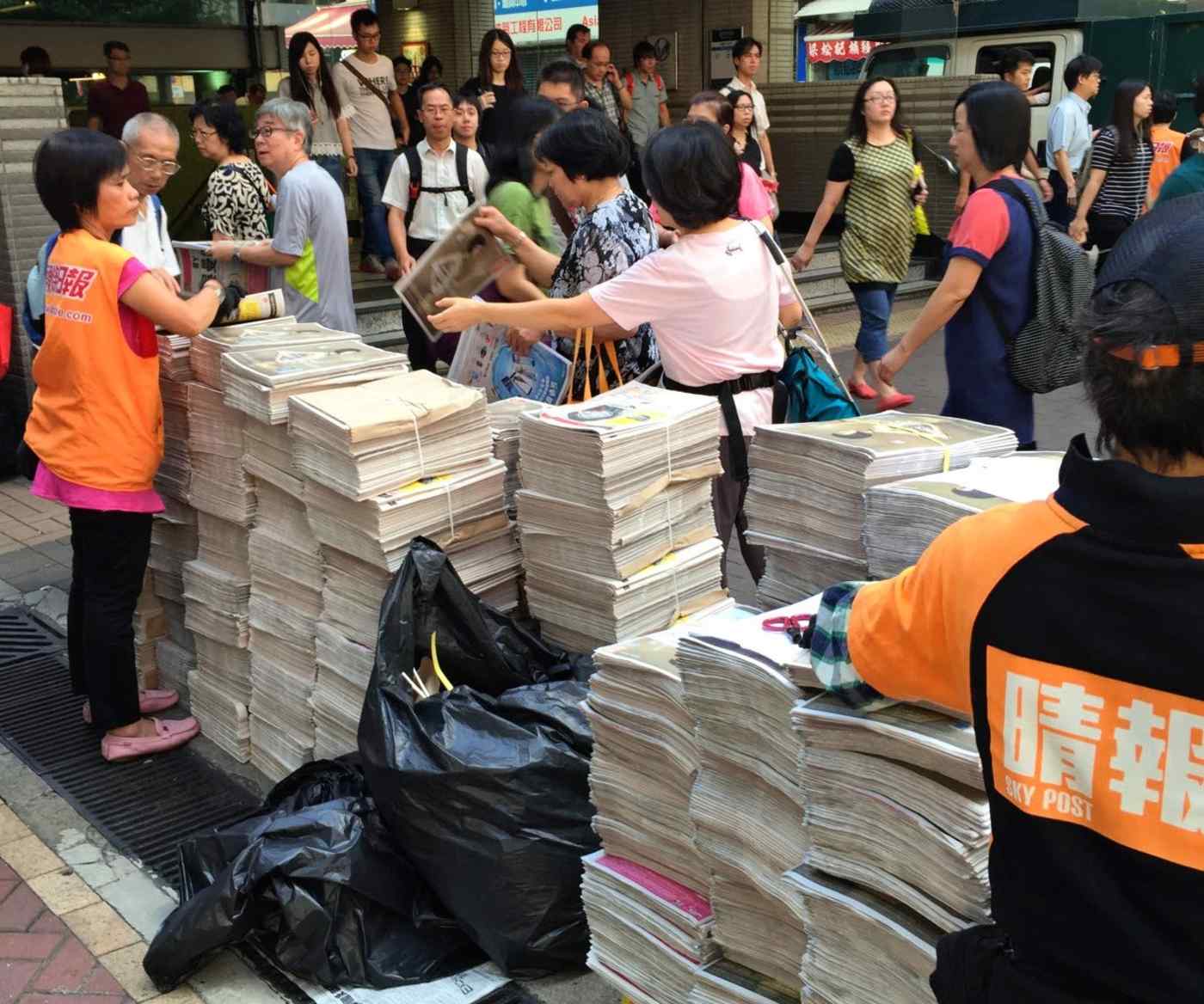 HONG KONG -- In recent weeks, the news about the news in Hong Kong has been bad. Politics is killing traditional media here, but not necessarily in ways one might think.

Next Media group, Sing Pao Media Enterprises and Hong Kong Daily News have each curtailed print publishing operations. Broadcaster Asia Television, the oldest TV station in greater China, will go off the air next April, following a decision by the Hong Kong government not to renew its license. Analysts expect more announcements from other struggling media organizations to follow.

Traditional media everywhere are suffering as they try to hold onto audiences spoiled for choice in the digital age.

What makes Hong Kong different is the role the territory's increasingly toxic politics has played in traditional media's demise. There is also a lot more at stake in Hong Kong, which has long seen itself as a pocket of press freedom in China's robe of censorship and which is used as a regional hub for many international media companies.

Many blame mounting tensions between the city and its political overlords in Beijing, which culminated most recently in the 79-day Occupy Central protest movement late last year. The close interconnection of politics and the media has expedited the decline of some media, as advertisers and readers flee from publications considered too political.

Supporters of such views point to Next Media group. Its annual report says its Apple Daily newspaper is the city's most widely read paid newspaper and that its magazines Next Magazine and Sudden Weekly are the two most widely read weekly publications.

Controlled by mainland-born media tycoon Jimmy Lai Chee-ying, Next Media published the final print edition of Sudden Weekly on Aug. 7. Around 70 of the magazine's employees were laid off in July. Around a third of Next Magazine's staff are being let go, too, as the company moves to combine it into a weekly "bundle" with two other titles, Eat & Travel Weekly and Me, which were previously distributed with Sudden Weekly. The company closed Sharp Daily, a free daily newspaper, in October 2013.

Mark Simon, commercial director of Next Media's animation unit, said that while Hong Kong magazines have generally been less successful at capturing digital readers than newspapers, the fallout from the city's political tensions has also played a role.

Lai was a prominent supporter of the Occupy Central movement. He has conceded Next Media may have overdone its involvement and coverage of the protests. In October, anti-Occupy protesters surrounded the offices of the group for around a week and took other steps to disrupt delivery operations.

"Advertisers have told me they consider Next publications to be too sensitive politically and too much trouble," Simon said.

Apple Daily's extra coverage of political news squeezed other sections of the paper, which Simon said may have alienated some subscribers. Apple Daily's daily readership actually rose 19.4% last year to 1.68 million. But paid circulation fell, with average sales slipping 13.2% on the year to 170,118 copies in the second half of 2014. Noting that it sold around 375,000 copies a day a decade ago, Simon said sales have continued to slide toward 150,000.

In recent years companies such as HSBC, Standard Chartered Bank and Cathay Pacific Airways as well as luxury car brand Mercedes-Benz, have stopped advertising with Next Media, according to Simon.

Other publications are also feeling the pinch. On July 15, a court appointed KPMG as liquidator of Sing Pao Media Enterprises, and the accounting company then suspended printing of Sing Pao Daily News, Hong Kong's oldest Chinese-language newspaper. The paper resumed printing on Aug. 6 after an infusion of funds from Gu Zhuoheng, the company's chairman.

Hong Kong Daily News, another Chinese-language newspaper with more than half a century of history, shut down in mid-July. The paper, controlled by entertainment conglomerate Emperor Group, blamed its circulation woes on the impact of free newspapers and changing reading habits.

In contrast to Next Media news publications, these two newspapers were strongly pro-Beijing in their outlooks.

Liu Kin-ming, a former executive and journalist with Next Media and other local news companies, said he was not surprised by the developments at Sing Pao and Hong Kong Daily News.

"If you asked any typical Hong Kong newspaper reader, I would be surprised if they read these publications," said Liu, who is now a public affairs consultant. He said the owners of these and other smaller newspapers seem to have held onto the loss-making publications in the belief that doing so could help curry political favor from Beijing. "Of course, this is complete nonsense," he said.

Chan Yuen-ying, director of the Journalism and Media Studies Center at the University of Hong Kong, said such "nonmarket factors" allowed Hong Kong's old media to survive for so long.

This, and overreliance on revenue from advertising, had propped up traditional media outlets in the territory, reducing their drive to innovate and invest in technologies needed to survive in the digital age. "In media technology, Hong Kong has been left behind," she said.

For a long time, these factors -- the sobering economics of the newspaper business, political polarization of outlets and changing technology -- have been eroding traditional media, she said.

"Finally, the metal has become fatigued and it is starting to fall apart," she said.

Chan is optimistic that the demise of traditional media will lead to a rebirth, citing the growing reach of online media outlets such as Hong Kong Free Press and Hong Kong In-media. "Out of the ashes, new forms of innovative media will emerge," she said.

A new English-language news website, Hong Kong Free Press launched in late June after raising HK$600,000 through online fundraising, known as crowdfunding. "With attacks on journalists, advertisers withdrawing from media critical of the establishment along with the existential pressures facing the wider industry, it is ever more vital that the territory has an independent platform for critical voices to be heard," the publication declared in a mission statement.

Founder Tom Grundy said he sees an online opportunity for his nonprofit venture, which is seeking advertising. "There's a surplus of newspapers per capita in Hong Kong and so few of the traditional media players have a decent online presence," he said.

Chan said Occupy Central has, in some ways, contributed to the growth of such outlets. "It was a kind of cultural awakening for Hong Kong and the power of social media unleashed," she said.

Chan believes that such new media outlets will be able to tell the story of Hong Kong to local and international audiences better than the old media could ever do.

Others are less sanguine, pointing to the deteriorating media environment in Hong Kong. In a report from the Hong Kong Journalists Association released in July, Chairwoman Sham Yee-lan said, "I have been in the industry for 30 years and have never seen a year with so many reporters being attacked." International advocacy groups Reporters Without Borders and Freedom House each dropped Hong Kong nine places in their separate annual rankings of global press freedom from their 2014 positions.

Still others suggest that the close intertwining of politics with media in Hong Kong will hinder efforts to create thriving new media to replace the old by making advertisers wary. "In Hong Kong, the links between politics and media have created a stale environment, and that's killing growth of new media," Simon said.