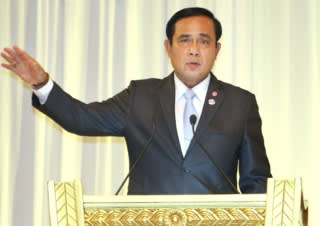 The new cabinet "will focus on driving the country forward," Prayuth told a group of Japanese business leaders Aug. 21. He acknowledged the sluggishness of the economy since the May 2014 coup that brought him to power, but vowed the new team would spark stronger growth.

The change was welcomed by some market observers. "The reshuffle is focusing on the economy, not the security side like before," said Isara Ordeedolchest, a senior vice president at SCB Securities. "Obviously, the government is banking on private expertise for new economic measures."

Neckties in, epaulets out

Of the 34 ministers in the new cabinet, 19 were newcomers or those who switched positions, with military officers giving up key posts such as transport, commerce and foreign affairs to civilian deputies. Still the number of retired and active military figures in the new cabinet rose slightly, to 14, versus 12 in the previous group.

The new economic team, headed by economist Somkid Jatusripitak, is expected to introduce more stimulus. Somkid served as finance minister in the ousted government of Thaksin Shinawatra and was seen as the driver of Thaksin's controversial populist policies.

"Some kinds of populist policies will help reignite the country," said Tim Leelahaphan, an economist at Maybank Kim Eng Securities. With the Bank of Thailand having lowered interest rates twice this year, there is not much room left for expansionary monetary policy. But fiscal measures, such as giving out money to farmers to reduce their debts, could give the economy a lift, said Leelahaphan. "The national referendum is approaching and a populist policy with low risk will help shore up the popularity of the military regime," he said. People pray Aug. 24 at the Erawan shrine, a Hindu temple in central Bangkok that was the site of a deadly blast a week earlier. (Photo by Yumi Kotani)

While few analysts have expressed doubts about the competence of the new ministers, many have said they need to deliver results quickly. With international issues pressing, such as a possible ban on seafood exports, and a new fiscal year due to start in October, Leelahaphan said the new cabinet will have to prove itself in two months.

Thai business is in the doldrums, hampered by weak domestic consumption and investment as the military regime fails to deliver on its promise to bring growth along with political stability.

Total sales at 511 companies, or 93% of all companies listed on the Stock Exchange of Thailand dropped 8% on the year to 2.59 trillion baht ($72.6 billion) in the April-June quarter, accounting for about 90% of listed companies, the bourse said. They managed a 5% on-year gain in net profit, thanks to cheaper crude oil.

Along with slumping consumer spending and public investment, Thailand also faces a headwind from China's slowdown.

And the deadly Aug. 17 blast at the Erawan shrine, a Hindu temple in central Bangkok is bound to hit the tourism sector. That has been the only bright spot, supporting modest economic growth in Thailand over the past two quarters. Many industries will suffer knock-on effects from a drop in tourism. Thai Airways International has been flooded with requests for postponements since the attack. About 20% of reservations have been affected, Charamporn Jotikasthira, the airline's president, told a local newspaper.

"Sales of SIM cards for foreigners [visiting Thailand] may be affected," said an executive at No. 2 mobile operator Total Access Communication.

Authorities have issued an arrest warrant for a man seen in video footage wearing a yellow shirt, but the suspect's identity has not been established. Early reports said the suspect was a foreigner, but the government later backtracked and said it is unlikely an international organization was responsible for the attack. Authorities also initially claimed at least 10 people took part in the bombing, but later walked that back as well, saying they had only mentioned the possibility of multiple perpetrators.

"If the police have good fortune we might be able to make an arrest," national police chief Somyot Pumpanmuang, told reporters.