U.S. Navy personnel and a Philippine sailor practice how to arrest and search a suspected pirate during a joint training drill aboard the USS Fort Worth off the Philippine city of Puerto Princesa on June 22.    © Reuters
SIMON ROUGHNEEN, Asia regional correspondentSeptember 3, 2015 00:00 JST | ASEAN
CopyCopied

JAKARTA -- These days, the word "piracy" usually brings to mind illegally copying music, movies or software. But in the waters of Southeast Asia, mainly off Indonesia and Malaysia, the traditional meaning prevails, with boatloads of armed men storming cargo vessels in the hunt for bounty.

Describing eight pirates who in mid-June boarded the Orkim Harmony, a Malaysia-registered tanker, Adm. Abdul Aziz Jaafar, Malaysia's navy chief, tweeted that the men were "armed with pistols and parang (a type of machete). They speak with Indonesian accents."

An Australian air force patrol eventually spotted the stolen tanker during a search mission with Malaysia's navy. The pirates, all Indonesian, were arrested in Vietnamese waters and confessed to stealing the boat, which was carrying a crew of 22 and 7.5 million liters of gasoline.

The Orkim Harmony heist was followed in early August by an attack on a Singapore-registered tanker. Heading from the Indonesian port of Tanjung Pinang to the island of Langkawi off the northern coast of Malaysia, it was stopped and drained of fuel.

During the first six months of 2015, pirates launched an attack once every two weeks on average in Southeast Asian waters, according to the International Chamber of Commerce's International Maritime Bureau.

"We have been busy, getting many calls, emails, even faxes," Noel Choong, head of the IMB's Piracy Reporting Center in Kuala Lumpur, told the Nikkei Asian Review. The center was set up in 1992 as "a 24-hour and free service for shipmasters to report any piracy, armed robbery or stowaway incidents," according to the IMB website.

The IMB data does not include incidents that take place in the dangerous waters between the Malaysian state of Sabah and the southern Philippines, where pirates have regularly kidnapped people for ransom. These incidents typically involve raiders from the Philippine archipelago province of Sulu snatching victims -- often foreign tourists -- from boats or hotels in Sabah.

Nonetheless, 68% of the 134 piracy incidents reported worldwide in the first six months of 2015 occurred in Southeast Asia, compared with 53% of the 116 incidents in the same period of 2014. The true extent of the problem may be underreported.

"Shipowners fear higher insurance rates if too many incidents are reported and also believe that local authorities are themselves responsible for attacks in the Malacca Strait and nearby waters," Carolin Liss, a maritime security expert at the Peace Research Institute Frankfurt, wrote in a 2014 analysis of Southeast Asian piracy. 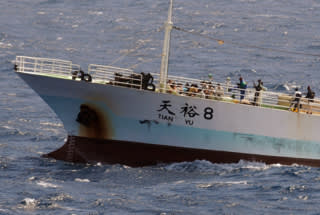 This photo, supplied by the U.S. Navy, shows pirates holding the crew of a Chinese fishing vessel hostage in the Indian Ocean.   © Getty Images

The increase in the number of incidents marks a return to the period between the early 1990s and 2006, when Southeast Asia was the most "pirate infested" region in the world, according to the IMB. It was subsequently overtaken by an upsurge in deadly attacks and hijackings in the waters off Somalia and East Africa, where ships' crews were sometimes held captive for years. The piracy epidemic forced Western warships to start patrolling the African waters.

"If you look at Somalia, the attacks have almost stopped, due to the international patrols and ships using private security," Choong noted.

Attacks in Southeast Asia are less deadly and less lucrative, but they are more numerous, making up three-quarters of global maritime piracy for all of 2014.

That is perhaps unsurprising given that the waters stretching from the Indonesian island of Sumatra and the Malay Peninsula east into the South China Sea are among the world's busiest. Around 120,000 vessels pass through the Strait of Malacca a year, including tankers carrying 70-80% of China's oil imports, mostly from Africa and the Persian Gulf.

"Typically, the pirates attack small tankers in operations carried out quickly and in which they take anything that can be quickly and easily processed or repackaged and sold on," said Choong.

Vessels flying the Singaporean and Malaysian flags are the most frequent targets of pirates. Indonesia, Malaysia, Singapore and Thailand carry out joint patrols as part of the Eyes in the Sky initiative under the regional cooperation agreement on combating piracy and armed robbery against ships in Asia. But the success of these programs has been limited. The reluctance of the countries to allow foreign navies inside their territorial waters makes it easier for pirates to flee across maritime boundaries. That has led Malaysia to call on its neighbors to increase anti-piracy cooperation.

Given that the pirates who attacked the Orkim Harmony were Indonesian, the incident may cause some embarrassment for Indonesian President Joko Widodo, who made a point of discussing the country's maritime potential in his inaugural address in October 2014, invoking the slogan "Jalesveva Jayamahe" (in the ocean we triumph).

"This has proven very significant to combat illegal fishing in our waters," Alina Tambunan, director of fishery resource surveillance at the Ministry of Marine Affairs and Fisheries, told the Nikkei Asian Review.

Indonesia has scuttled dozens of captured foreign-flagged fishing boats in recent months, most recently blowing up 34 vessels on Aug. 18, the day after the 70th anniversary of the country's independence from the Netherlands.

According to the IMB, 58% of reported Southeast Asian pirate attacks in the first half of 2015 occurred in Indonesian waters, with most related to "low-level, opportunistic thefts from vessels." The IMB noted that many attacks in Indonesian waters and by Indonesians go unreported, suggesting the country's pirates are even more prolific than the numbers suggest.

The world's biggest archipelago nation -- with 17,000 islands and nearly 55,000km of coastline -- Indonesia has long been a leading source of piracy. In 2004, for example, the country accounted for 93 out of 329 recorded attacks worldwide; its islands, bays and straits offer ample places to hide for fast-moving buccaneers. 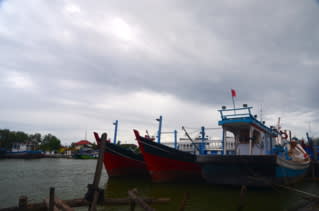 Fishing boats are moored in Banda Aceh, Indonesia. Poverty has caused some fishermen to turn to piracy. (Photo by Simon Roughneen)

Poverty and overfishing have played a part in the country's piracy problem. Many Indonesian offenders are thought to be disaffected or impoverished fishermen whose livelihoods have been blighted by overfishing, polluted waters, increased competition for depleted stocks and illegal fishing in Indonesian waters by foreigners.

Only part of the story

Most of the reported attacks in Indonesia are minor thefts carried out while vessels are anchored or in port rather than the large-scale hijackings or violent abductions, which were a feature of the Somali piracy attacks.

A World Bank study estimates that between April 2005 and December 2012, Somali pirates hijacked 149 ships, collecting as much as $385 million in ransom money, some of which was allegedly used to finance terrorist groups in the region, such as al-Shabab.

But there is no sign that Southeast Asia's waters will become as dangerous as those off the east coast of Africa once were. Moreover, the IMB data needs to be used with caution as it risks overstating the nature of piracy in the region by failing to differentiate between the scale and ferocity of the incidents.

As Sam Bateman, a maritime security expert and former Australian navy officer, said in a commentary for the Lowy Institute for International Policy, an Australian think tank, the IMB's reports "suffer from the major drawback that they deal only in absolute numbers, counting an incident of petty theft from a ship at anchor as equivalent to a major incident of ship hijacking."